The term synbiotic, less known than probiotics or prebiotics, was born in 1995. In 2019, a group of scientists came together to propose a new definition. Discover why synbiotics are more than simply a probiotic-prebiotic combination and how they can benefit you.

The history of the synbiotic concept

Scientists Gibson and Roberfroid coined the term ‘synbiotic’ in 1995 to refer to a combination of a probiotic and a prebiotic.

The result is a new definition of synbiotics, described as “a mixture comprising live microorganisms and substrate(s) selectively utilized by host microorganisms* that confers a health benefit on the host”.

As scientists have come to consider that a synbiotic is not simply a combination of a probiotic and a prebiotic, two types of synbiotics have emerged:

What can synbiotics do for you?

Synbiotics’ health benefits are not limited to your gut health, as they can target areas of your body outside of the gut, such as the skin.

The panel of experts that set the new definition of synbiotics explain that orally administered complementary synbiotics have been shown in human trials to aid in metabolic syndrome, irritable bowel syndrome, inflammatory bowel diseases, diarrhea and atopic dermatitis, among others.

Synbiotics are more present in your daily than you probably imagine. They are a tasty and smart recipe that allow you benefit from probiotics and prebiotics all in one. For example, a snack including a yogurt accompanied by some whole-wheat cereal or a piece of yogurt will benefit your health and you will also be consuming a synbiotic!

Learn more about the new definition of synbiotics and how they are formulated in this new ISAPP infographic. 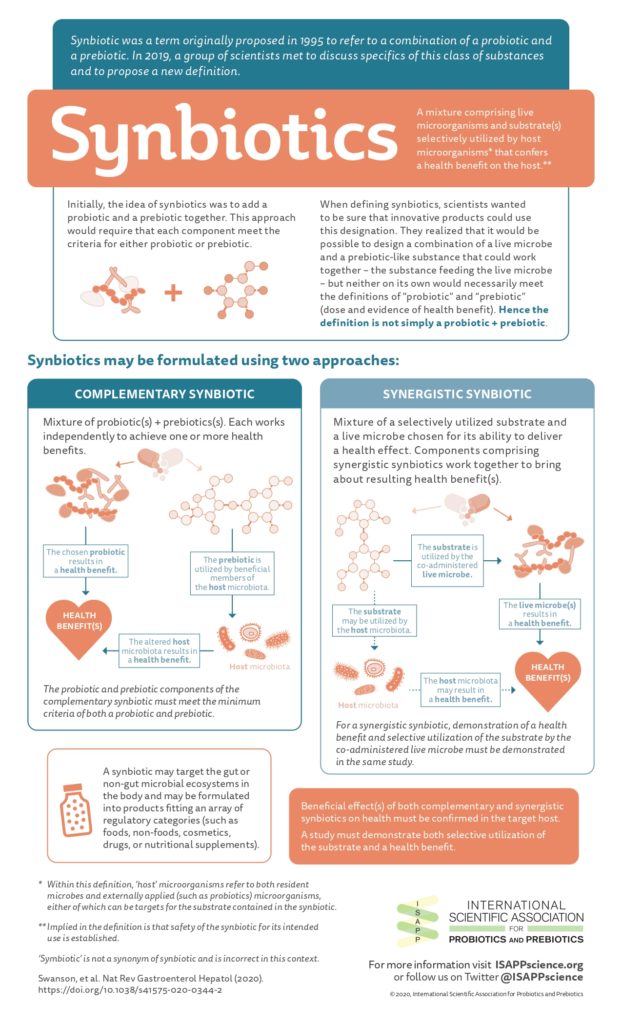 Is water the forgotten nutrient for your gut microbiota?

The gut microbiota is exposed to and modified by a range of factors on a daily basis, with diet being one of the most important. New findings from the American Gut Project reveal that drinking water source ranks among the key contributing factors in explaining gut microbiota variation.