Could dead microorganisms or their components promote health? Is it time for postbiotics

It is known that live microorganisms, when ingested in adequate amounts, may confer health benefits. Now, scientists have established a consensus definition for dead microbial cells and/or their components and clarified how you might benefit from them. 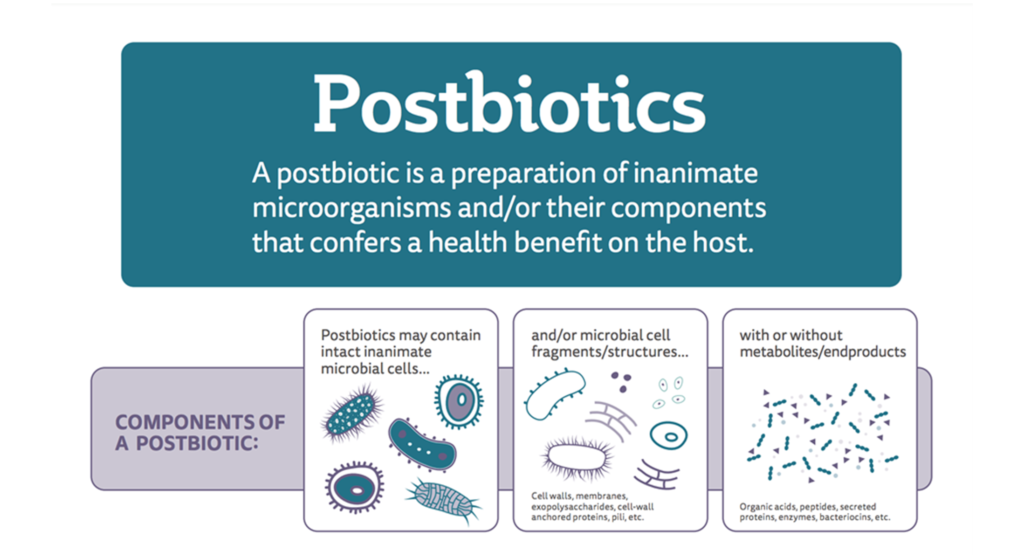 You have probably heard of prebiotics, which are food for beneficial microbes that live on or in you, and probiotics, which are the live microorganisms themselves. But you may not be familiar with another member of the ‘biotics’ family, known as postbiotics.

Scientists have known for a while that non-living microorganisms can have beneficial health effects and, compared to live microorganisms, can have a longer shelf-life and are easier to store. For instance, in 2019, Patrice D. Cani and colleagues showed that Akkermansia muciniphila treated with mild heat inactivation was superior to the live bacterium in improving key aspects of metabolic syndrome in overweight individuals or those with obesity.

Until now, however, scientists had not agreed on a term for dead bacteria and their components.

As with probiotics, there is lots of noise out there about what postbiotics actually are. In fact, the media and even scientists often use different terms to refer to postbiotics, including “paraprobiotics”, “ghost probiotics” and “heat-killed probiotics”.

To reduce misinformation and confusion among consumers, health-care providers and companies, scientists working in different fields met in 2019 to coin a definition of postbiotics. Now, according to a recently published consensus paper, the official definition of a postbiotic is “a preparation of inanimate microorganisms and/or their components that confers a health benefit on the host”.

Simply put, the components of a postbiotic include intact inanimate microbial cells and/or microbial cell fragments and structures (such as cell-wall components or membrane proteins), with or without metabolites synthesized by bacteria.

While probiotics are living, both prebiotics and postbiotics are made up of dead components. In other words, postbiotics can be seen as an attempt to deliver straight to your gut inactivated microbial cells such as those living in the gut, with or without their own metabolic compounds and without someone’s own gut microbiota or a probiotic as an intermediary.

So what about what is not a postbiotic? Components derived from microbial growth that are purified and remain without cell or cell products, for instance, are not postbiotics. As an example, that means that butyrate should be called by its name and that it does not fit within the scope of postbiotics.

What can postbiotics do for you?

You can find postbiotics primarily in foods, dietary supplements and infant formulas. So if you imagine a fermented milk such as yogurt containing live and inanimate microorganisms and molecules that are produced by bacteria as a result of fermentation, that combination would qualify as a postbiotic.

While the field is still in its infancy, some studies have shown that the potential health benefits of postbiotics include improving digestive discomfort and preventing common infectious diseases such as acute gastroenteritis.

As the microorganisms in postbiotics are not alive, they cannot cause infections, so their safety should not be a concern.

View the infographic from the International Scientific Association for Probiotics and Prebiotics on the definition of postbiotics here.