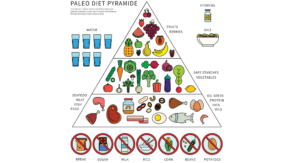 Numerous claims are currently being made about different dietary patterns as a means of ensuring optimal gut health. Even so, their effectiveness and safety are not always supported by scientific evidence.

The Paleolithic (or ‘paleo’) diet is often promoted as a means of improving gut health. But despite its popularity, the science-based long-term effects of this diet remain unknown.

A new cross-sectional study, led by Dr. Amanda Devine from Edith Cowan University in Australia, has found that individuals consuming a Paleolithic diet show a shift in their gut microbiota composition, along with increased serum trimethylamine-N-oxide (TMAO) concentrations.

The authors explored the association between dietary intake and both gastrointestinal and cardiovascular health in individuals who self-reported following a Paleolithic diet—defined as the consumption of no more than 1 serving/day of grains and dairy products—for more than 1 year (n=44). Individuals following a standard balanced Australian diet featuring grains, legumes and dairy products were used as a control group (n=47).

Some associations between dietary patterns and genus composition were observed. Participants with long-term adherence to the Paleolithic diet showed a lower intake of resistant starch, which is a type of dietary fiber that is a preferred substrate for the gut microbiota. In addition, the Paleolithic group showed reductions in genera Roseburia and Bifidobacteria, which are involved in metabolizing complex carbohydrates and which produce butyrate.

In addition, the long-term adherence to the Paleolithic diet was associated with changes in gut microbiota composition characterized by a higher abundance of trimethylamine (TMA) producer Clostridium hathewayi, which belongs to the genera Hungatella.

Furthermore, serum levels of TMAO, a gut microbiota-derived metabolite mechanistically linked to cardiovascular disease, were higher in the group that showed strict adherence to the Paleolithic diet (22 out of 44 participants) when compared with controls.

The relative abundance of the Hungatella genus and serum TMAO levels were inversely associated with whole grain intake, but not with resistant starch. These results may indicate that grains may affect the fermentative capacity of the gut microbiota to produce TMA, which originates from dietary choline—found in high amounts in animal-based products such as red meat and eggs—and is the precursor of TMAO.

These findings show that long-term adherence to a Paleolithic diet is accompanied by a different gut microbiota composition and increased serum TMAO levels. This observation of the impact of the Paleolithic diet on gastrointestinal and cardiovascular health may suggest that the benefits of the ‘paleo’ diet for gut health, so fervently promulgated in the media, are not supported by science.

The researchers conclude that higher whole grain consumption could be beneficial for those following a Paleolithic diet.