There are an endless number of differences between men and women and one of those differences is that eating exactly the same diet affects the gut microbiota composition of men and women differently, as a new study has recently showed. 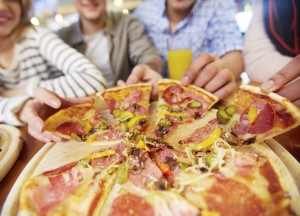 There are an endless number of differences between men and women and one of those differences is that eating exactly the same diet affects the gut microbiota composition of men and women differently, as a new study has recently showed.

As we have already explained in this blog, it’s a well-known fact that the food we eat and our lifestyles can alter the bacteria living inside our digestive systems, especially those responsible for warding off diseases and helping us digest food, among other important tasks.

Now, for the first time, researchers from the University of Texas at Austin (USA) and six other institutions have also taken into account the impact that gender and nutrition have on our gut flora. The researchers found a surprising result: eating the same food has a significant different effect in gut microbiota of males and females.

“Our study asks not just how diet influences the gut bacteria, but it splits the hosts into males and females and asks: Do males show the same diet effects as females?”, Daniel Bolnick, a professor at the University of Texas at Austin’s College of Natural Sciences and lead author of the study, says in a press release.

To investigate this question, scientists decided to explore the gut bacteria in two species of fish and in mice, and also conducted an in-depth re-analysis of data from previous studies on humans. The results of the study, published earlier this summer in the journal Nature Communications, showed that while there was little sex-driven microbial variability in mice (the explanation for this still isn’t known), the fish and human digestive microbial changes in response to diets were clearly different in males and females, including species diversity and population.

Although scientists do not know why men and women react differently to diet, they believe that hormones associated with each sex might affect the composition of gut microbiota, favouring the presence of certain strains of bacteria over others. It might also have to do with the immune system, which functions differently in males and females, and could affect which microbes live in the gut microbiota.

A wider diversity of gut bacteria has been linked to lower risk for metabolic diseases, such as diabetes and obesity, as well as also inflammatory bowel disease. That is why, in part, these results are very intriguing: they suggest therapies designed to improve human health via manipulating the gut microbiota might need to be tailored for each gender. At the same time, gender-biased rates of some diseases might need to be reconsidered for such sex-diet specific interactions. Unfortunately, for the moment the study cannot be translated into specific diet tips for each gender.