Seasonal diet changes affect the composition of our gut microbiota

A group of scientists at the University of Chicago has found evidence of this seasonal shift in the gut flora, by studying the remote Hutterite population, in North America. 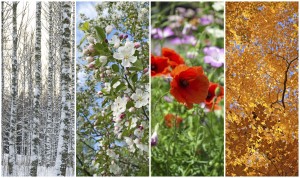 A group of scientists at the University of Chicago has found evidence of this seasonal shift in the gut flora, by studying the remote Hutterite population, in North America. The traditional diet and common meals of this community have allowed researchers to study the effect of one common diet in a large population over a long period of time.

In the last few years, scientists have found that a healthy composition of the gut microbiota is essential for digesting food, developing immunity against disease, and even for mental equilibrium. Some diseases or antibiotics’ treatments can alter the gut flora composition. But what maintains day-to-day balance is diet, through which bacteria are nourished, or ingested.

However, it is difficult to study the specific way in which food affects gut flora, because dietary habits vary a lot among individuals. What’s more, the effects of other environmental factors can combine with that of food – from different lifestyle habits to different climatic conditions. To minimize the effect of these factors, the University of Chicago group headed towards the Hutterites, the descendants of a small population from Europe who emigrated between 1874 and 1879 and currently live in northern US and western Canada.

Hutterites live in communal farms (colonies) and eat meals in common dining rooms, using traditional recipes that have been relatively stable over time and between colonies. They have little contact with the world outside their colonies, which translates into a very homogeneous genetic pool.

Sixty Hutterites from six colonies answered questionnaires about what they ate over the course of a year. During the same period, scientists sampled their stool periodically, to find the genetic sequences of bacteria contained in their gut.

The Hutterites’ diet is relatively stable, except that in summer they eat more fresh fruit and vegetables, and in winter they eat less, and turn to frozen or canned food. Remarkably, their gut flora responded to these changes with massive modification in the abundance of certain bacteria. For example, during summer Bacteroidetes were more abundant: this group of bacteria contain complex carbohydrate digesters, which may be at work in processing fresh fruit and vegetables.

On the other hand Actinobacteria increased in winter: these microbes are associated with processing fat, and with a decreased content of fibre in food. Researchers also found seasonal shifts in other types of bacteria, whose associations with food are still unknown. Notably, the trends were almost identical in all six colonies, possibly a result of a very homogenous lifestyle carried on in a very similar environment.