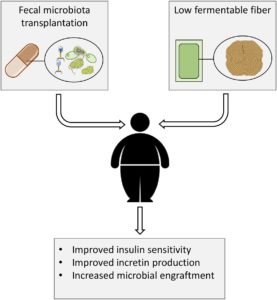 Although current research supports the role of fecal microbiota transplantation (FMT) mainly in recurrent Clostridioides difficile infection, emerging evidence suggests it could also work for other conditions such as inflammatory bowel disease and non-infectious diseases, including metabolic syndrome and obesity.

The authors compared the efficacy on insulin sensitivity, assessed by the homeostatic model assessment (HOMA2-IR/IS), of high and low fermentable fiber supplementation in patients with severe obesity and metabolic syndrome receiving and not receiving FMT (in form of encapsulated donor feces) from a lean donor.

Although FMT and low-fermentable fiber led to an increase in fecal microbiota richness both at 6 and 12 weeks from baseline, the authors reported that improvements in insulin sensitivity were not maintained after a follow-up at 12 weeks in the absence of fiber intake. Interestingly, specific bacterial taxa at baseline (Phascolarctobacterium, Bacteroides stercoris and B. caccae) acted as predictors of insulin sensitivity.

The study’s major caveats include its methodology (i.e., within-group comparisons), the small sample studied and the lack of homogeneity of the four donor samples under study, which is a known bias in the field.

The findings suggest that the potential application of FMT in obesity is driven in part by the living microbial fraction and its engraftment in recipient individuals, as Nordin M. J. Hanssen and Max Nieuwdorp acknowledge in a spotlight article in Cell Reports Medicine summarizing research from Mocanu et al.

Although the preliminary nature of the study needs to be replicated, the results highlight the role of fiber in increasing the potency of FMT, supporting the potential role of gut microbiome modulation as a novel treatment for improving metabolic health. The study also highlights the importance of standardizing FMT preparation and delivery and studying in great detail the diet of donors, which can contain other nutrients beyond fiber that can affect FMT’s efficacy.