Targeting the intriguing relationship between mitochondria and microbiota at Pasteur Institute

After the state of the art session, the 'Targeting Microbiota' congress at Pasteur Institute moved on to the potential relationship between mitochondria and microbiota. Marvin Edeas introduced the concept with the fact that the reduction and oxidation (RedOx) potential homeostasis

After the state of the art session, the ‘Targeting Microbiota’ congress at Pasteur Institute moved on to the potential relationship between mitochondria and microbiota. 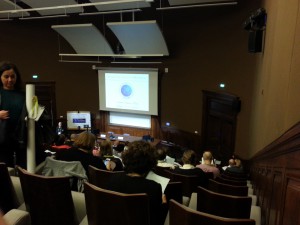 Marvin Edeas introduced the concept with the fact that the reduction and oxidation (RedOx) potential homeostasis is controlled by mucosal cells in the gut. Indeed, he hypothesized that microbiota and the host mitochondria may have a crosstalk via Reactive Oxygen Species (ROS).

While microbiota seems associated with multiple disorders like metabolic disease, brain dysfunction and inflammatory bowel diseases, mitochondria dysfunction is also at the origin of diabetes or Parkinson’s, for example. He indicates that hydrogen sulfur, which can be produced by gut microbiota, can inhibit cytochromes, for example. Together, those facts could implicate that ROS stress, inflammation or metabolic anomalies could be managed by taking into account both mitochondria and microbiota.

Next, Adrew Scott Neish (Emory University School of Medicine), Fabrizia Starvu (Institut Pasteur) and Laurent Chatre (Institut Pasteur) showed some examples of this potential connection between ROS, mitochondria and some bacterial species. For example, Laurent Chatre showed how mitochondria can be important targets for pathogens like Helicobacter pylori in the stomach.