We were in Madrid from 24th to 26th of February attending the 2nd Gut Microbiota for Health World Summit. The event gave us the opportunity to meet leading international experts and obtain information on the latest trends and findings in 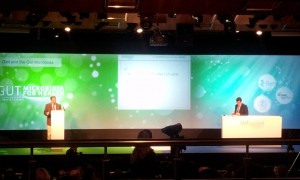 We were in Madrid from 24th to 26th of February attending the 2nd Gut Microbiota for Health World Summit. The event gave us the opportunity to meet leading international experts and obtain information on the latest trends and findings in the field of gut microbiota. Diet, nutrition, lifestyle, environment, faecal transplantation, the immune system and different conditions (such as obesity, IBD, IBS and allergies) were among the main topics discussed in either the plenary sessions or workshops.

One of the hottest topics was the relationship between the digestive tract and the brain (commonly called the gut-brain axis). As Professor Emeran Mayer from the University of California (Los Angeles, USA) pointed out, “the reason for the close link between emotional feelings and gut function is related to a variety of bidirectional communication channels via which the gut and the brain maintain a permanent exchange of messages that medical research is busy trying to decode. But recently it has become clear that a third player is part of the game: the gut microbiota.” Although previous literature on the topic exists, it has been demonstrated for the first time in humans that the intake of probiotics has a measurable effect on brain areas that are associated with emotional reactions. You can read further information about this interesting research carried out by Dr Kirsten Tillisch and Professor Mayer’s team in the article “Gut feelings: can the microbiota talk to the brain?”.

Another subject that attracted the attention of scientists and also generated debate is a technique that is gaining considerable attention from the media and the medical community – faecal transplantation. You will more than likely hear a lot about this procedure in the near future, as there are some leading experts who strongly believe that faecal microbiota transplantation can cure some gastrointestinal diseases. Over the past two decades, Clostridium difficile infections have developed into a virtual pandemic and the outcome of standard antibiotic treatment is unsatisfactory. In this context, Professor Lawrence J. Brandt  (Montefiore Medical Center, New York, USA) strongly defends faecal microbiota transplantation, having proven that it offers a rapidly acting and highly effective alternative in treating recurrent Clostridium difficile infections (also known as RCDI).

The Internet played a key role during the 2nd Gut Microbiota for Health World Summit, helping spread knowledge and the debate about gut microbiota (also known as gut flora) around the world. The event was broadcast via the website and sessions were commented on Twitter using the hashtag #GMFH2013. Daily impressions from speakers and attendees were also published (videos can be found here: 1st day, 2nd day, 3rd day).

The event provided us with the perfect opportunity to interview scientists and obtain first-hand information relating to the current status of research and discoveries about gut microbiota. We will soon start sharing these video interviews with you on the blog.

The success of this event is proof of the relevance of gut microbiota for medicine and science and, without a doubt, provides us with knowledge that will improve our health and help us fight disease.

We look forward to sharing more of the latest news on this amazing subject with you. Please keep sending us your comments and opinions. And remember, as Prof. Patrice Cani from Belgium said during his speech, “The future is in us. In GUT we trust!”