Dr. Stephen Collins is a gastroenterologist and a researcher at McMaster University in Canada. Collins’ recent studies on the functional relevance of the gut microbiota, in collaboration with Dr. R. DePalma & Dr. P. Bercik, were recently presented at the 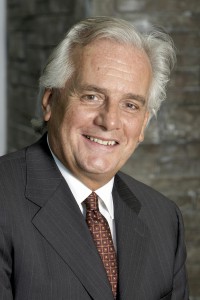 Dr. Stephen Collins is a gastroenterologist and a researcher at McMaster University in Canada. Collins’ recent studies on the functional relevance of the gut microbiota, in collaboration with Dr. R. DePalma & Dr. P. Bercik, were recently presented at the American Gastroenterological Society’s annual meeting. Meanwhile, in April 2014, his review of the role of the gut microbiota in Irritable Bowel Syndrome (IBS) was published in Nature Reviews Gastroenterology & Hepatology. The article covers evidence that the gut microbiota is related to both the intestinal manifestations and the psychiatric manifestations of IBS, and that important changes in the microbiota may be triggered by diet, antibiotics, infection, and stress. The evidence reviewed supports the idea that gut dysbiosis has a causal role in IBS.

Over the years I acquired a large number of patients with post-infectious IBS. I was challenged in dealing with these types of patients. So as an investigator I decided I would try to steer my research to this area. I started to develop models of the condition and became interested in the role of enteric infection in causing [IBS].
As a clinician, I like to meet the challenges I see in clinic. A lot of my patients have this condition that often gets discarded as a useless diagnosis: ‘it’s in your head’, that sort of thing. Yet some of these patients are very debilitated. It’s rewarding to do research in an area where there’s an unmet need.

You studied the residents of Walkerton, Ontario, Canada, after a contaminated water supply caused several infected people to die and thousands to become ill in May, 2000. What have you learned about post-infectious IBS?

As soon as the outbreak occurred, we at McMaster University and University of Western Ontario (UWO) decided we should investigate these patients. Because E. coli was the dominant pathogen, the deaths that occurred in Walkerton were primarily due to hemolytic-uremic syndrome. So the group at UWO were very interested in kidney function in the patients that survived and we were interested in gut function in the patients that survived. So we followed these patients for eight years [to see who developed IBS].
It’s one thing for the infection to trigger the onset of this condition, but how did it maintain? We did some phenotyping. We found that [those affected by IBS] had increased intestinal permeability. We did some genotyping. What we found was that people who were [infected had] abnormalities in genes that encoded for bacterial recognition, genes that regulated epithelial permeability, and those that encoded proteins involved in [innate] immune responses. So [we realized] this entity of post-infectious IBS could be a much more chronic condition.

What are the limits of the human and murine models in this research?

The whole problem with microbiome research to date, is it really relies on associations. Changes in the microbial composition of the gut and the phenotype are a snapshot. And that doesn’t necessarily mean a causal relationship. It’s difficult to sort out, so what we have tried to do in experiments that were recently presented at the annual meeting of the AGA is figure out where the microbiota is functionally relevant. So we took the microbiota of [human] patients with IBS and put them into germ-free mice and we got a pretty good representation of the human donors in the mice in terms of the microbial profile. The microbiota from IBS patients, but not healthy controls, [had] the ability to induce changes in gut physiology and also psychopathology. This adds weight to the fact that gut microbiota plays a role in IBS. It still doesn’t answer cause and effect. In my opinion, that’s almost impossible. [Researchers are] limited in what they can do in humans: both ethically, and because the gut microbiota is subject to too many factors.

What are the potential clinical applications of your research?

It appears that the microbiota contribute to the expressions of gut and brain manifestations of IBS. Therefore, therapies directed at the microbiota may be beneficial. They can be dietary: you can change diet, you can change microbiota in a beneficial way. That’s the role of prebiotics. The one that’s actively being pursued now is the role of probiotics. There’s a lot of hope for probiotics in IBS, more so in my opinion than in, for example, Inflammatory Bowel Disease (IBD). Because in IBD you have so much in the way of host predisposition that it’s hard to believe it’s going to be overcome simply by altering the gut bacteria.
Is there a role for fecal transfer (FT) in IBS? The answer is probably ‘yes’ at some point. The whole field of FT is really in its infancy. I equate it to blood transfusions. Many years ago we were transfusing blood quite happily without, for example, knowing there was hepatitis C in there. [Fecal transfer] patients have to be patients that have documented problems with the microbiome… and we have to better screen the donors. We need to phenotype the donors more carefully before we begin giving FTs for things other than lethal things like C. difficile. In practice we have to be careful. It’s possible there are chemicals out there that can interfere with the microbiome in ways that might be beneficial in IBS. [Finally,] using bacteriophages that can transmit genetic material to the microbiome, that can modify the microbiome.