A guide to the present and future of fecal microbiota transplantation, with Dr. Alexander Khoruts

Alexander Khoruts, MD, is a gastroenterologist and Associate Professor of Medicine at University of Minnesota. Since he carried out his first fecal microbiota transplantation (FMT) in 2008, he has conducted research on the procedure and developed protocols for wider clinical use.

Alexander Khoruts, MD, is a gastroenterologist and Associate Professor of Medicine at University of Minnesota. Since he carried out his first fecal microbiota transplantation (FMT) in 2008, he has conducted research on the procedure and developed protocols for wider clinical use. Dr. Khoruts has spoken about FMT to many audiences and is one of the leading clinical experts on the procedure. (See this article on how science writer Carl Zimmer first heard about FMT a conference from Dr. Khoruts.)

Dr. Khoruts recently co-wrote a paper in Immunology Letters, entitled Emergence of fecal microbiota transplantation as an approach to repair disrupted microbial gut ecology. He was also a speaker at the 2014 James W. Freston Conference, held in Chicago on August 16th and 17th, which explored all aspects of FMT. 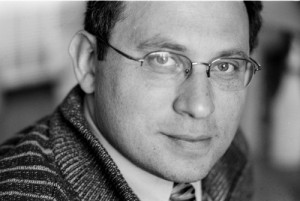 What motivated you to use FMT with a patient for the first time, in 2008?

I, like many physicians, ran into a desperate patient who ran out of options. We have an epidemic of C. difficile infection that has changed the character of this disease over the last couple of decades. So these patients are not that uncommon.

She came to my clinic and it was not a diagnostic dilemma — I knew about fecal transplants already. It was something that was mentioned even when I was in medical school in the 1980s. At that time it was kind of a funny thing for students to snicker about. But it was clear that [it] was the only thing left. So I thought that this patient came to the university, which means that this is probably her last stop.

Scientifically, there was nothing done [up to that point]. [FMT] was just something occasionally reported clinicially. So I thought it would be important to take it one step further and see whether what people thought happened, happened. From the very beginning the idea was that the bacteria from normal donors would replace or reconstitute some sort of ecosystem within the recipient. It was never shown up to that point, so we measured the donor and recipient composition before and after the procedure and did demonstrate in that first case that there was engraftment of those donor microorganisms, or the entire community, in fact. And that it was fairly sustained up to a month, [which] we measured at that time.

At that point, why weren’t your colleagues routinely doing FMT as a clinical procedure?

It was being done. I was not the first one to do it. So in Western medicine it was described in 1958 and it was continuously practiced since that time throughout the world. But it was a pretty rare thing to do.

The disease [C. difficile infection] changed compared to previous decades. It is more common. After doing the initial description of what happens with one case, [there] slowly followed additional patients and we studied that and then started to refine the process, with the idea that the way it was described up to that point was never going to make it to mainstream medicine. So we needed to standardize it and introduce all kinds of processes so that ultimately it would be an easy thing to do for any physician.

What motivated you to write the recent article about FMT in Immunology Letters?

Here’s the one clinical example where it’s very clear-cut. This is the microbial human organ that’s completely devastated by antibiotics that becomes infected with pathogens, and this problem can’t be solved until the microbial ecology is reconstituted.

Do you hope other clinicians use the standardized FMT procedures you have developed?

It’s a big undertaking to develop your own program. Some people are indeed following our protocols. But it requires a big commitment, it requires funding, and those are usually the problems that make it difficult.

What is clear is that there is a new class of drugs that will emerge. We’re calling them ‘microbiota therapeutics’. And it’s important to distinguish that from probiotics. Because these products… are similar in that they contain live microorganisms, but they’re different from probiotics in that they’re actually intended to treat disease. Whereas probiotics never make that claim legally.

Do you see synthetic microbial communities as the way forward with FMT?

There are different views on this. I look at the microbial communities that are taken from live donors today; the advantage of that is that this is what nature came up with. It’s a pretty high standard to reach for anybody else with anything synthetic.

Of course there’s a lot of variability among people and there’s all kinds of concerns about the changing microbiome in the entire population. So I think both approaches are valid: that we cannot dismiss fecal transplants, sort of minimally manipulated material at this point, but we shouldn’t dismiss synthetic attempts either. I think the FDA, for example, the regulatory agency, may feel sort of enamoured by the synthetic approaches. You can produce a lot of data on characterizing your microbial community, so it looks like we know a lot about it. But I think that kind of knowledge is misleading. It can be seductive. We shouldn’t be underestimating our ignorance because these are such incredibly complex systems. We think of the natural microbiome — it’s not just bacteria, there’s bacteriophages, there’s fungi, there’s all kinds of stuff there. It all works together, communicates with the host. We don’t know whether some concoction of synthetic organisms may not have some long-term side effects, or alter the recovery of the microbial community in some way that is not necessarily good.

I don’t want to say that either one of these arms of research [should be] shut down. We have a lot to learn from both. And there could be a convergence of the two as well.

Given emerging research on gene-microbe interactions, do you ever suspect that the genetic differences between donor and recipient might affect how FMT works?

I don’t particularly worry in the clinical setting right now. The reason is that everything in medicine involves risk-benefit calculations. The patients we’re treating are desperate. They’re either going to die, or they’re going to have a miserable life for a few years and then die. So when faced with a patient like that versus some theoretical risk that 20 years from now, something might not happen, that doesn’t seem to be a difficult calculation. We haven’t seen short-term problems with using completely unrelated donors.

We’ve learned a lot about the importance of the microbiome over the last decade, so a lot of people are concerned that you could be transferring diabetes or autoimmunity or something like that. It’s all valid to a certain extent. We do worry about these things.

At the same time, we have to acknowledge that the way antibiotics go through the approval process does not concern itself with any of these problems. The studies are done, they’re short term. The end points are about one, two months. Nobody wonders whether a child treated for ear infection at age one is going to develop inflammatory bowel disease at age 15, and that [it] should be a warning on the label, for example. That would be a new paradigm. It seems like there’s this focus on these concerns with the emergence of giving microbes, and there is no focus on that when you’re talking about killing microbes.

You recently participated in the 2014 James W. Freston Conference on FMT. What was particularly interesting to you at the conference?

For me the most interesting session was a presentation of Dr. Wellington Sun from the FDA. That’s the regulatory aspect… most questions that are raised [were] answered that the agency is considering these and that no final decision was made.

He did say that mere standardization of the process may not be sufficient for the FDA to license something. So the first thing we thought we needed to do was standardize the preparation. In any kind of biologic which is very complex, you cannot absolutely say that this lot is identical to the next lot. If it [is] a cell culture technique or whatever it may be, there are minor differences. In this case we’re dealing with something that is intrinsically dynamic, and changing on a daily basis. So we cannot say that composition is going to be identical. It’s not. So we thought, ‘Well that may be so, but if we standardize the process of preparation, we could at least say that this lot was made exactly the same way as the other lot’. That was called ‘GMP’, Good Manufacturing Process, which is done for all pharmaceuticals. And he indicated that mere standardization would not be enough, that he wanted more compositional information and more mechanistic information. Of course, being a researcher, I’m happy to work on this if there’s funding.

Actually I believe the FDA is wrong in calling this a drug. I think it is an organ transplant. I’m willing to [call] it a tissue transplant. The reason why the FDA did not accept the notion of a transplant is because it considers this material not human. And the law is written that human transplants are distinct from drugs. But if there is good evidence that these microorganisms have coevolved with their human hosts — we’re not talking about doing other species’ fecal transplants into humans, we are talking about humans. So I view it as these microbial communities that live within us, they are part of the human body. It’s true they’re open to the environment and they are changing; however, it may be they’re still part of humans. There are no germ-free people running around. So to me, it is an organ transplant.