Earlier this year, the American Gut Project branched out across the Atlantic with the launch of The British Gut Project. Dr. Tim Spector, the project lead, spoke with GMFH about the endeavor. Tim Spector, of London, UK, is a Professor of

Earlier this year, the American Gut Project branched out across the Atlantic with the launch of The British Gut Project. Dr. Tim Spector, the project lead, spoke with GMFH about the endeavor.

Tim Spector, of London, UK, is a Professor of Genetic Epidemiology at King’s College London, as well as the Director of the Department of Twin Research and Genetic Epidemiology at St Thomas’ Hospital. He founded the UK Twins Registry, which is one of the world’s largest collections of genotype and phenotype information on identical and non-identical twins. 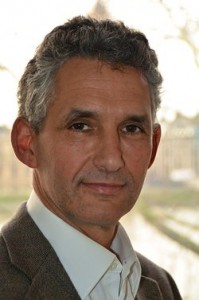 What led to the idea that the American Gut Project needed a collaborator in the United Kingdom?

The problem with the American Gut Project was that people outside the US had trouble getting samples to them without huge bills or getting lost. And storage: taking two weeks to arrive wasn’t very good for the samples. So there was a lot of demand to set up somewhere else.

Rob Knight and I got together and decided that we could do this, because we’d already been running a big twin microbiome project in which we’ve already collected several thousand samples.

You can be non-British and still [participate]. You just have to pay a bit of extra postage to get it to London, but other Europeans can do it.

So those are the two main things: one is to involve people in the UK and close-by countries that can ship stuff to us… it can be French and Belgian neighbors that can get [samples] to us quickly without going across the Atlantic. And then there’s this wider call to start doing these interventions that people can do themselves.

What interventions are you hoping people will undertake?

We can’t force people to do anything, so what we do is suggest some of the ones that we think are likely to show a change in some people. We piloted some of these recently in the US and the UK, whether it was ‘fasting diets’ or ‘cheese diets’ or ‘Coca-Cola diets’, or ‘McDonald’s diets’. We’re probably going to come up with about ten ideas and we’ll try and get people to stick to those, so that way we have a fairly standardized regime, and then the results can be pulled.

This is the study that I’m leading within the American Gut Project that we’re very keen to get people to join: a particular three-day intervention to test your microbiome.

What has been the public response to your project so far?

I think the public in the UK is not as ‘into it’ as in the US. We’re a year or two behind. There are no [popular] microbe books on the shelves or people talking about it. So I think we have to, in part, create the demand, tell people what they can do.

In certain disease groups there [is interest]. Irritable bowel syndrome and [other] ones… but I’m not sure for people interested in general health. It’s always hard to gauge how much knowledge is out there.

What will make the project a success?

The way we’ve gauged it at the moment, [we need] lots of people to come forward and sign up. We can analyze the results, and… because of the donation scheme, it pays for itself. So really it’s just getting people from the widest parts of the community. Not just people with particular illnesses or problems, but people who live in all parts of the British Isles, with all kinds of different diets and health states and ages, getting them to participate.

Once they [get] their baseline results, they [may] say, ‘Oh, that’s interesting, I want to see what happens when I go on a Paleo diet or when I go on a low-fat diet. Which one’s going to get a better response from me?’ This could be a way of telling people what the best diet is for them…. Some people just do better on some foods than others, and our microbes might be able to tell us that.

What big research question do you personally hope these projects will address?

There’s huge individuality in all humans. And because we share so little of our [microbiota makeup] with each other, unlike mice, I think everyone needs to get their own baseline to see what the differences are, rather than just relying on averages.

I think coming to terms with this variability is going to be important.

[We have a recent paper] showing there’s a genetic component to the gut microbiome. So if you combine the unique cultural and lifestyle effects plus a bit of genes, everyone starts differently [in terms of their microbiota]. Therefore, just taking a cross-section, you don’t know whether they’re on the way ‘down’ or the way ‘up’.

Your previous research focused on human genes. What led you from studying genes to studying the gut microbiota?

About five years ago I was listening to a talk… I was at a genetics meeting, someone was [speaking about] twin work, and talking about the microbiome. I’d only heard vaguely about it, and they basically said that according to these small twin studies, there was no genetic component [in their outcomes]. I stood up and said these studies are far too small; everything that’s important in biology has a genetic component. And then Ruth Ley, who was at the meeting, came up to me and said ‘Why don’t we do a twin study together that has the hundreds and thousands of people needed to show it?’ And that’s what we’ve done. So we’ve now got an NIH grant together, and that’s what we’ve been doing for the last few years. It keeps me happy to have a genetic component there now, and I’m not limited to just genes because I study every ‘omic’… [in essence,] the body’s signatures.

What relationship have you found between a person’s genes and his/her gut microbiota?

It’s a susceptibility, so that [with certain genes] on average you’ll have higher levels of one [bacterial species] than the other. Clearly, environment is still a very major factor. But there are a few microbes that are particularly controlled by our genes. And they might be the ones that are important in diseases.