What happens to ingested microbes?

Bacteria in food, including probiotics, are a major environmental source of microbes in the human body. 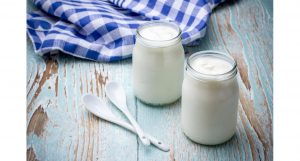 Bacteria in food, including probiotics, are a major environmental source of microbes in the human body. But what happens to the bacteria once they are ingested? Do they have any short- or long-term effects on the body?

Derrien and van Hylckama Vlieg recently published a review in Trends in Microbiology, Fate, activity, and impact of ingested bacteria within the human gut microbiota, designed to answer these questions. The review is of particular relevance as probiotic foods and supplements become more widely used.

One way to judge the effect of ingested microbes on the body is to ascertain their impact on the resident gut microbiota. Authors summarized relevant results in a Table 1: Overview of clinical studies that used next-generation sequencing approaches or metabolomics to study the impact of ingested bacteria on the human gut microbiota.

Taken together, the results suggest no major alterations in dominant fecal gut microbiota as a result of ingested microbes, but in some cases the microbes had a ‘global impact’ on gut microbiota and/or induced changes in specific bacterial groups.

Ingested microbes, say the authors, form part of our transient microbiome. In some cases the reach the small intestine and colon alive and metabolically active. Despite the resistance of our resident microbiota, some ingested bacteria can integrate temporarily; strains of B. animalis, L. casei, L. rhamnosus and L. plantarum showed the greatest robustness. Because the resident microbiota communities are so heterogenous in humans, the effects probably vary from individual to individual.

Authors say there are three possible ways in which ingested microbes might exert their effects on the resident microbiota: (1) Trophic interactions, (2) Direct stimulatory/inhibitory effects on members of the resident microbiota, and (3) Indirect alteration of the microbiota by inducing a host response. They specify that future studies need to include microbiota changes as an endpoint; more work is also needed on identifying key marker metabolites that may be triggered by microbiota shifts.