This article updates what is known in the field and how next-generation probiotics and postbiotics might impact on clinical practice in the foreseeable future.

From traditional to next-generation probiotics: where do we stand?

The possibility of modulating the human microbiota for health is a captivating proposition and probiotics have figured prominently as tools to accomplish this. Clever researchers are expanding our understanding of probiotics to include microbes that do not fall under the umbrella of “traditional” probiotic species. This refers to “next-generation probiotics”, which are considered to be novel functional microbes with beneficial properties and the term corresponds to newly isolated bacteria most of the time.

We can, for instance, mention Christensenella minuta, Faecalibacterium prausnitzii, Anaerobutyricum soehngenii and Akkermansia muciniphila. These four examples have all been studied in preclinical studies for their mechanisms of action and have reproducibly improved several metabolic parameters.

When the viability of microbes is not essential for providing health benefits: the case of postbiotics

Pushing the envelope further, a revitalized approach to leveraging the value of microbes is emerging as researchers are learning that, in some cases, microbe viability may not be essential to realize at least certain clinical benefits. The concept that dead microbes may be efficacious is not new, but recent research findings have fortified the concept. Postbiotics were recently defined by the International Scientific Association for Probiotics and Prebiotics (ISAPP) as a “preparation of inanimate microorganisms and/or their components that confers a health benefit on the host.” In other words, postbiotics are non-viable microbes (whole or cell components) with or without microbial metabolites. 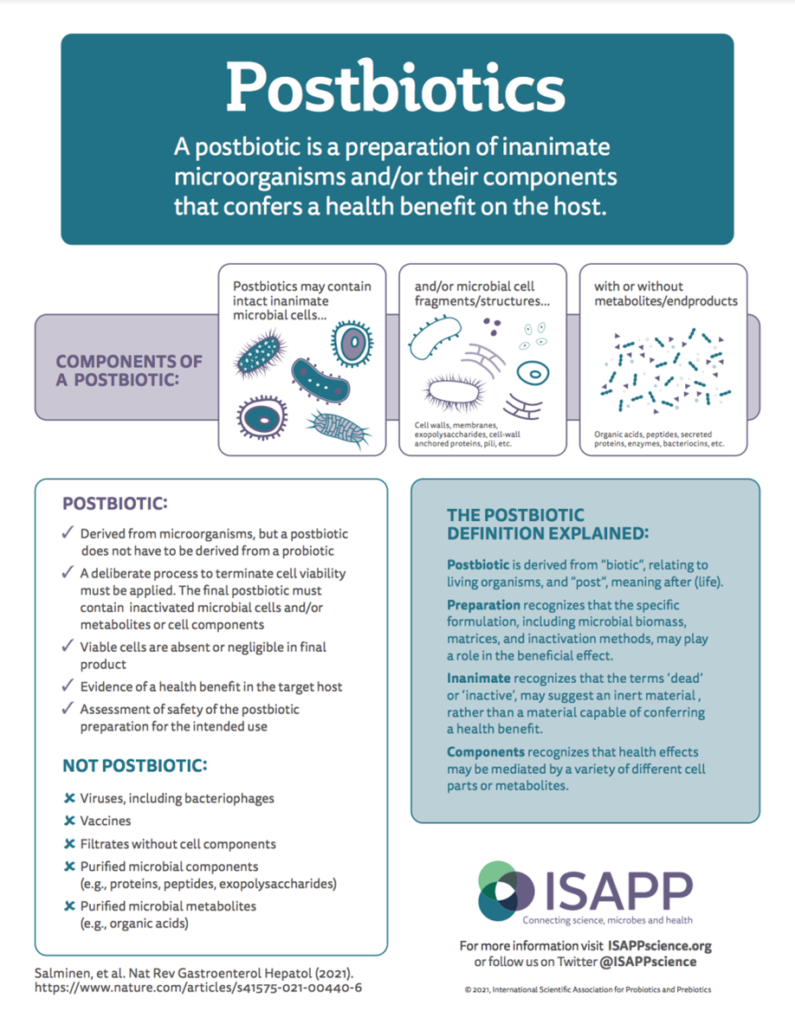 Source: ISAPP’s educational infographic on the new definition on postbiotics 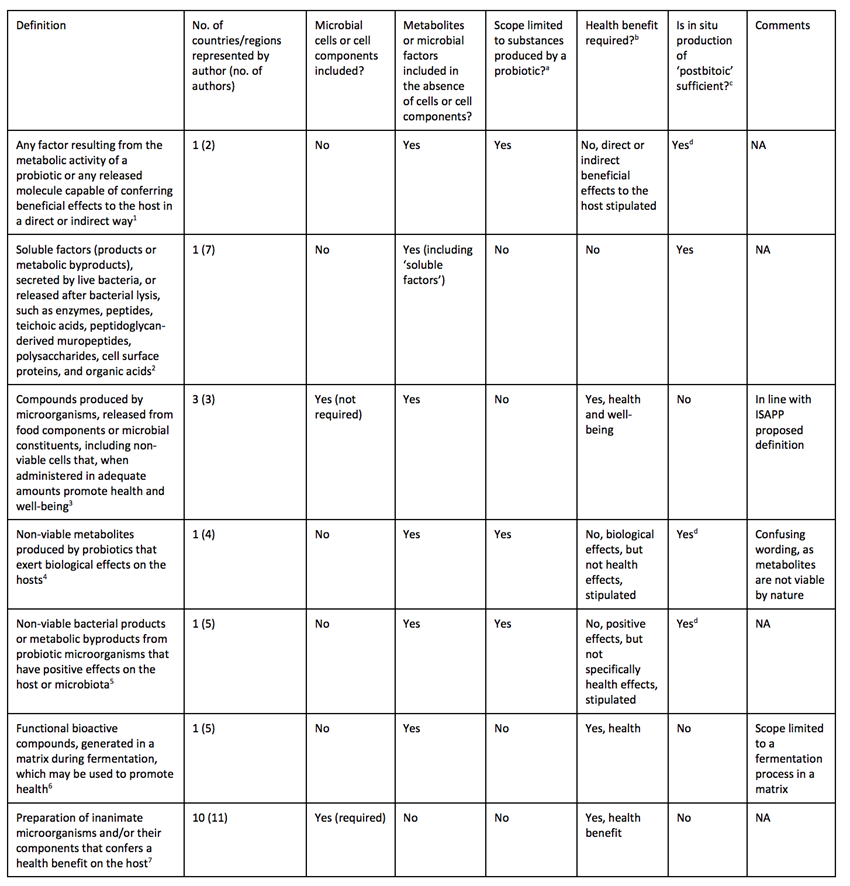 The ISAPP definition does not require the progenitor microorganism to be a probiotic and does require a health benefit of the substance when administered to the host.  Under this framework, substances such as filtrates without cell components, purified microbial components such as proteins, peptides, or exopolysaccharides, or purified microbial metabolites, such as lactate or butyrate would not be postbiotics. Instead, such substances should be called by their names—‘lactase’ or ‘butyrate’—and no additional term may be needed.

However, preparations of pasteurized microbes, such as unpurified bacterial lysates, pasteurized fermented infant formula, or the pasteurized Akkermansia muciniphila preparation described below would qualify as postbiotics, assuming sufficient efficacy and safety evidence is available. Although some disagreement on the best focus for the postbiotic definition exists, time will tell what the scientific community embraces as the most useful characterization of these emerging substances.

An example of the potential from bench to bedside in a well-studied gut microbe: the case of Akkermansia muciniphila in cardiometabolic disorders

Of all the candidates mentioned above, several crucial steps have been achieved by Akkermansia muciniphila, which has been the subject of studies for more than 10 years and which is now moving from preclinical to clinical studies.

Past and recent studies in mice have described the beneficial effects of pasteurized Akkermansia muciniphila as, for instance, strengthening the gut barrier and moderating the development of various cardiovascular disease risk factors including obesity, fat storage, insulin resistance, hypercholesterolemia, and type 2 diabetes. In humans, researchers administered pasteurized Akkermansia muciniphila as a nutritional supplement to overweight or obese volunteers, all displaying insulin resistance and risk factors for cardiovascular diseases (metabolic syndrome). While observing excellent safety levels, importantly, they also confirmed in humans what had already been observed in mice (i.e., improved insulin sensitivity and markers of stronger gut barrier, lower cholesterol, lower inflammation and hepatic inflammation).

In addition to the important move “from bench to bedside”, key progress has been made from a regulatory point of view. In September 2021, the EFSA (European Food Safety Authority) panel published its decision that pasteurised Akkermansia muciniphila is considered safe as a food ingredient at the specified conditions of use and intake levels.

Pasteurized Akkermansia muciniphila fits perfectly with the ISAPP definition of “postbiotic”, as it is “a preparation of inanimate microorganisms and/or their components that confers a health benefit on the host.” Therefore, the production of, for instance, SCFAs or secreted molecules from a live bacterium does not explain the beneficial effects.

What next for next-generation probiotics and postbiotics?

Postbiotics and next-generation probiotics are targeted strategies for promoting health and managing disease. The mechanisms driving their effects may directly or indirectly involve microbiota modulation, or may instead be driven by other mechanisms, such as direct immune activation, enzyme production, or gut barrier interaction. Regardless, a level of precision with such interventions can be contrasted with the inexact approach of transferring undefined microbial communities to achieve similar outcomes.

There is another potential novel beneficial bacterium that has been identified, which goes under the name of Dysosmobacter welbionis. The name means “bacterium that smells bad” (Dysosmo: “that smells bad”, in Greek, bacter: bacterium), and “welbionis” for WELBIO, the Belgian Walloon organization that funded the research into this butyrate-producing bacterium. By analyzing 12,000 fecal samples from around the world (i.e. a highly representative population sample), scientists observed that the bacterium is present in 70% of the population and that the abundance of Dysosmobacter welbionis was less present in people with type 2 diabetes.

Strikingly, in mice, the administration of the bacteria to high-fat diet treated mice induces a lower body weight, fat mass gain and improved glucose tolerance and insulin resistance. These effects were also linked to higher mitochondria in the brown adipose tissue, thereby lowering sugar levels and weight, in addition to having strong anti-inflammatory effects. All these effects are very promising for type 2 diabetic and obese subjects and resemble those of Akkermansia.

Professor Patrice D. Cani is researcher from the Belgian Fund for Scientific Research (FRS-FNRS), group leader in the Metabolism and Nutrition research group at the Louvain Drug Research Institute (LDRI) from the Université catholique de Louvain (UCL), Brussels, Belgium, and WELBIO (Walloon Excellence in Lifesciences and BIOtechnology) investigator. He is currently member of several international associations, he is member of the Alumni College from the Royal Belgian Academy of Sciences, and he has been elected in the board of directors of the LDRI (UCL). Patrice D. Cani has a M.Sc. in Nutrition and another M.Sc. in health Sciences, he is registered dietitian and PhD in Biomedical Sciences. His main research interests are the investigation of the role of the gut microbiota in the development of metabolic disorders, such as obesity, type 2 diabetes and low grade inflammation. More specifically, he is investigating the interactions between the gut microbiota, the host and specific biological systems such as the endocannabinoid system and the innate immune system in the context of obesity, type 2 diabetes and metabolic inflammation. Prof Cani is author and co-author of more than 110 scientific research papers published in peer-reviewed international journals, conferences and book chapters.