Sahar El Aidy presented us her recent work about mice colonization as a model to study host-microbial homeostasis dynamics. This work was done under the supervision of Michiel Kleerebezem at Wageningen University (The Netherlands) : 1) What is your background

Sahar El Aidy presented us her recent work about mice colonization as a model to study host-microbial homeostasis dynamics. This work was done under the supervision of Michiel Kleerebezem at Wageningen University (The Netherlands) : 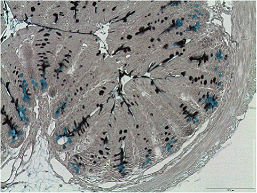 2) What is the context of this study?
In the gastrointestinal tract there are extensive interactions between the host diet, immune system, metabolism and colonizing microbiota. To preserve homeostasis, immune responses including the mounting of appropriate, tolerant responses to the colonizing gut microbiota, have to be tightly controlled.  In a previous study, we employed a germfree mouse model to study the dynamic regulation of mucosal responses to the microbiota during 30 days of conventionalization, focusing on the development of the mucosal immune system. Interestingly, that study highlighted the strong induction of innate immune responses after four days of conventionalization, followed by development of adaptive immune responses at later stages of conventionalization.
In this study, we aimed at pointing-out the crucial factors involved in this transient stage in the step-wise development of the mucosal immune system, which is essential to establish and maintain a microbiota-accommodating mucosal homeostasis.

3) What was the most challenging part of this study?
Collecting sufficient amounts of non-invasive samples (urine and fecal) from conventionalised mice at this transient state was indeed challenging compared with the samples collection at other time points during the process of microbial colonization. This was intriguing to note since it gives an indication that the mice could be more stressed at this transient state despite being healthy.

4) What was the main findings ?

5) What are the limitations?
Our study shows that colonization of adult, healthy C57/BL6 J germfree mice by their intestinal microbiota, is marked by a transient overrepresentation of the pathobiont Helicobacter, Sphingomonas and Mucispirillum. However, this state of transient overrepresentation during the dynamic process of microbial colonization needs to be confirmed in other host models. Once confirmed, we could generalize our conclusion that the transiently overrepresented microbial members identified in this study in combination with their co-occurring molecular signatures could serve as markers for the boundaries of resilience in mucosal defences and homeostasis, and could be employed as potential inflammation-risk indicators in humans and animals.

6) How your study could help clinicians in the future ?
The transiently overrepresented microbial groups identified in this study, in combination with their co-occurring molecular signatures, could serve as markers for the boundaries of resilience in mucosal defenses and homeostasis, and could be employed as potential inflammation-risk indicators in humans and animals.

For more information about gut microbial homeostatis, we advise our readers to have a look to her recent review : “Molecular signatures for the dynamic process of establishing intestinal host–microbial homeostasis: potential for disease diagnostics?” published in the November issue of Current Opinion of Gastroenterology.