The Gut-Brain Axis: A Two-Way Street 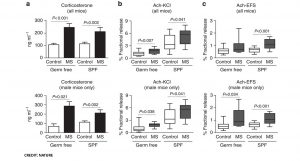 A study by De Palma, et al. used germ-free and specific pathogen-free mouse models to investigate the effects of early-life stress. Researchers reported that stress (maternal separation) altered the hypothalamic-pituitary-adrenal axis in mice. Colonizing adult germ-free mice with the same microbiota led to distinct microbial profiles in mice who had experienced early-life stress. After colonization, behaviour was altered in the stressed mice but not in control mice. This study showed that stress-induced changes in physiology resulted in dysbiosis; this dysbiotic gut microbiota was required for anxiety-like behaviour to manifest.

A mechanistic study by D’Mello, et al. examined a mouse model of liver inflammation (with resultant changes in brain function) and reported that a probiotic reduced sickness behaviour in the mice. This was associated with a decrease in circulating TNF-alpha levels and a reduction in microglial activation. The results suggest a new pathway through which the gut and the brain interact in systemic inflammatory diseases.

Meanwhile, another gut-brain study investigated the effects of probiotics in healthy humans. A randomized, placebo-controlled trial by Steenbergen, et al. reported a beneficial effect of a multispecies probiotic on cognitive reactivity to sad mood, in a 4-week intervention with non-depressed individuals. Probiotic intervention was associated with reduced rumination and aggressive thoughts.