Recent research has explored how specific dietary components such as proteins, fats, carbohydrates, probiotics and polyphenols interact with the gut microbiome to confer health benefits on the host. Although high salt content in the Western diet is a public health 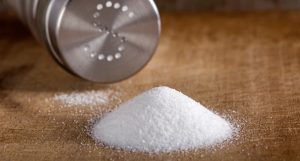 Recent research has explored how specific dietary components such as proteins, fats, carbohydrates, probiotics and polyphenols interact with the gut microbiome to confer health benefits on the host. Although high salt content in the Western diet is a public health concern, as it has been linked with several cardiovascular-related disorders, little is known about whether the deleterious effects of a high salt diet are driven by interactions with the gut microbiome and immune responses.

A new study, led by Prof. Dominik Müller of the Berlin Experimental and Clinical Research Centre and the Berlin Institute of Health within the Max Delbrück Centre for Molecular Medicine and the Charité (Berlin, Germany), has found that the gut microbiota is sensitive to a high salt diet and this may be partially involved in the immune dysfunction linked to hypertension and autoimmune diseases.

The researchers fed a group of 12 mice a very high dose of salt in their food (high salt diet or HSD: 4% NaCl) for 14 days, while 8 control mice continued with their normal diet (normal salt diet or NSD: 0.5% NaCl). Through 16S ribosomal deoxyribonucleic acid (rDNA) gene sequencing it was found that HSD altered the faecal microbiome and depleted Lactobacillus spp. in mice — L. murinus being the most affected one. By culturing L. murinus, human-associated Lactobacillus species and non-related control strains in vitro and testing their growth under increasing NaCl concentrations, the researchers confirmed that L. murinus was the most affected and had difficulty reproducing when the concentration of salt in its environment was high.

In addition, mice that had experimental autoimmune encephalomyelitis (EAE) -a disease model of multiple sclerosis- got worse when they consumed too much salt. Besides this, supplementation with L. murinus prevented HSD-induced exacerbation of EAE.

Lactobacillus species metabolize tryptophan to indole metabolites and mice that were monocolonized with the L. murinus isolate exhibited significantly higher faecal indoles, when compared to germ-free controls. Indoles produced by L. murinus reduced the numbers of a type of immune cell –the Th17 lymphocytes– which are associated with autoimmune diseases and hypertension. On the whole, L. murinus ameliorated salt-sensitive hypertension and reduced the number of Th17 cells.

Therefore, an excess of salt may increase inflammation by hindering the survival of L. murinus and other Lactobacillus species. However, supplements with the bacteria were able to counteract the effect, which would open the way for using probiotics to treat diseases associated with a high salt diet. Although humans do not have the bacterium L. murinus in their intestines, the authors speculate in the paper that other Lactobacillus spp. could exert the same protective role.

The researchers also conducted a small pilot study of 12 healthy men who ingested salt supplements of 6 grams a day for 2 weeks while maintaining their usual eating habits. Their blood pressure rose and the number of Th17 immune cells in their blood increased. These results suggest that the mechanism in humans is similar to that discovered in mice.

In conclusion, common salt reduces the number of certain gut lactobacilli in both mice and humans. This has an impact on lymphocytes that are partly involved in autoimmune diseases and hypertension and their symptoms can be ameliorated in mice through probiotic administration. These data are pre-clinical, so further studies in bigger samples of humans are needed in order to make evidence-based dietary recommendations for patients. According to Prof. Dominik Müller: “We are preparing double-blind, placebo-controlled clinical trials to confirm these results in humans. We are also planning to study the relationship of salt and microbiota with psoriasis [an autoimmune disease of the skin]”.