Prof. Iradj Sobhani is a physician in the Department of Gastroenterology at Assistance Publique-Hôpitaux de Paris, and a professor of medicine at University Paris-Est Créteil, in France. He is the director of the interdisciplinary research team Macbeth-EC2M3 (Microbiota and early colon cancer detection

Prof. Iradj Sobhani is a physician in the Department of Gastroenterology at Assistance Publique-Hôpitaux de Paris, and a professor of medicine at University Paris-Est Créteil, in France. He is the director of the interdisciplinary research team Macbeth-EC2M3 (Microbiota and early colon cancer detection by using multimodal molecular markers).

He and his co-authors recently published a paper in Molecular Systems Biology called ‘Potential of fecal microbiota for early‐stage detection of colorectal carcinoma‘. In this study, they used metagenomic sequencing of fecal samples to find taxonomic markers that separated patients with cancer from tumor-free individuals. 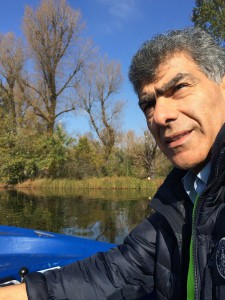 Pr. Iradj Sobhani is a physician in the Department of Gastroenterology at Assistance Publique-Hôpitaux de Paris, and a professor of medicine at University of Paris-Est Créteil in France.

Results showed that the accuracy of the metagenomic colorectal carcinoma (CRC) detection was similar to the standard fecal occult blood test (FOBT). Using both approaches together, however, sensitivity of detection improved more than 45% (over FOBT), with no decrease in specificity. This enhanced sensitivity of CRC detection using information from both FOBT and microbiota corroborates a recent American study.

Prof. Sobhani recently spoke with GMFH about this study.

Can you tell us about your research? How did it come about?

We were working in the clinic on cancer tissues and we were trying to understand how to predict the outcome of patients in whom cancer has been diagnosed. The different markers had previously been suggested, mainly in tissues, and actually some mutations are identified as a predictive factor for outcomes.

A confusing literature is available on inflammatory and immune markers around tumors in the microenvironment of tumors. It is a very exciting field, but the data are really confused. And in my small lab we had the opportunity to look on some small peptides like leptin or ghrelin, which are hormones involved in food intake, and we published in 2008 two separate papers, summarizing all these results on tissues and the outcome of a large series of patients, in Cancer Research.

The methods were, in these papers, that the majority of cancers should be considered as sporadic, meaning ‘due to the environment’. Actually, we know that less than 5% of colonic cancer can be considered as due to germline mutations.

Because we know that the incidence of colon cancer is still increasing in many countries, we are wondering why. In almost all tumors you find inflammation through the tumor and around the tissues, and in some cases far from tissues, in the presumed normal tissues in the same patients. For instance, if you do a colonoscopy, you can take a biopsy far from the tissue with the tumors and you find, in a very large proportion, mild inflammation.

So we looked, at that time in 2008, at hormones, presuming that these hormones might be involved in the inflammation. And indeed we find a very good correlation between hormones and/or their receptors, and a good correlation between these hormones and/or their receptors and the outcomes of patients. So the question was: what is the relationship between hormones and inflammation? And we had the impression that something was missing: hormones per se could not be the cause of inflammation in the colon. So, because in the colon you find one hundred trillion bacteria, the association was really easy to presume, that maybe one or several bacteria induced a mild inflammation and maybe this should be considered as a co-factor.

Reading the literature, we found that with gastric cancer, the incidence of which is actually decreasing in almost all Western countries… this cancer is associated with H. pylori in the stomach and the gastritis has been reported for a long time before H. pylori has been identified.

So we took this very simple association from gastric cancer on one hand, the scientific questions we could not address from colon cancer, and the interaction with the hormones involved in food intake on the other hand, and we tried to look for that. We performed a first pilot study, which has been published in PLoS ONE in 2011, based on the fresh stool 16S rRNA genes analyses in a small group of patients in whom we found colon cancer, compared to the gender- and age-matched individuals with normal colonoscopies. I think we reported the first paper showing that, in terms of phylogenic patterns, patients having colon cancer at colonoscopy were really different from those having a normal colonoscopy.

After that, we established a collaboration with a German group in Heidelberg, European Molecular Biology Laboratory, or EMBL… which has two main tools: a metagenomic sequencing platform, as well as programs to analyze these sequences. Julien Tap was the postdoc who accepted to go to Germany with samples from 155 patients from my department.

It was the combination of a hypothesis, and a man, and two groups aiming to collaborate together.

The whole genomic sequences have been performed, and this French population in whom 57 patients had cancer have been compared to the French population with normal colonoscopies… The results have been compared to the data they have from presumed normal or healthy individuals from Asia, Europe, or the United States. From these two first papers published in Nature, in a MetaHIT group study, these markers have been found very differential between colon cancer and presumed healthy groups.

All French and all German individuals had a colonoscopy and we can refer to this ‘gold standard’ exam. 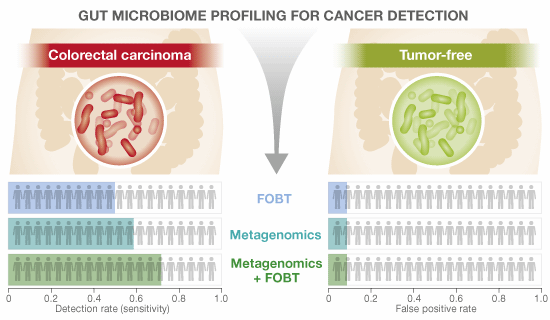 What is the main difference between your paper and other published papers?

I think that from the 16S, as in previous work, you cannot identify all bacteria. You can make some phylogenic hypotheses or you can find some dominant bacteria, but the sub-dominant or very rare bacteria, you will miss them. Now, having the whole genome, we can make the genomic part using [polymerase chain reaction, or] PCR or… other techniques… and we can speculate on the function of bacteria and go father with metabolomics, not necessarily with genomics.

Can you tell us more about the bacterial functions?

What’s the next step in order to move this research into clinical practice?

Prior to the clinic, we will learn more about the carcinogenesis. I talk about hormones involved in food intake, for instance. We know that food plays a very important role in several diseases and particularly in cancers, and specifically in colon cancer. We can have huge information from microbiota analyses. For instance, if you ask your doctor which food is better in order to avoid cancer, he will give you some general advice. Based on the genomic analyses we could speculate on the function of these bacteria, and found that those with colon cancer had largely more meat compared to those who have no colon cancer, who have bacteria that show more functions to metabolize vegetables. So you can now take information by analyzing the microbiota of individuals, and because we know that having meat is a bad factor for colon cancer, now we can go farther with this by giving scientific proofs.

The second point is… now we know a panel of some 18-20 bacteria and we are trying to make an easy and simple tool to identify these bacteria. We can, I hope, in a very short future time, make low-cost tools to identify the bacterial phenotype usually found in patients with colon cancer.

The third point will be, in those patients having cancer who will undergo therapy — surgery, chemotherapy — we can use the follow-up of these bacteria and try to understand why some of those will have very good response to therapy and some others will not. In terms of additional tests for prognosis or for response to therapy, bacteria will open a very huge field, and after the score of inflammation, after the score of gene abnormalities within tumors, now we have the score of bacteria.

Disclosure: One of the scientists mentioned in this article works on the GMFH publishing team.