Potential benefits of some microbiota-targeting nutrients in cancer cachexia

I participated to the conference "Targeting Microbiota" to update my knowledge concerning the gut microbiota and to foster collaborations with other scientists in the field. It was also a great opportunity to present my ongoing work. This congress was scientifically

I participated to the conference “Targeting Microbiota” to update my knowledge concerning the gut microbiota and to foster collaborations with other scientists in the field. It was also a great opportunity to present my ongoing work.

This congress was scientifically very fruitful. I was impressed by the quality of the invited speakers. The congress covered a broad panel of pathologies to which gut microbial dysbiosis could contribute, from liver diseases to spontaneous autoimmune demyelination. In my opinion, this congress typically exemplifies a trend of the last decade, namely that the gut microbiota is able to influence biological processes happening outside of the gastrointestinal tract, such as, for instance, adipose tissue physiology, lung immunity, placenta development and function, and social cognition. Interestingly, more and more studies are investigating the mechanisms underlying this crosstalk. We also attended a special session on fecal microbiota transplantation, where it became evident that we are far from reaching a consensus in terms of safety and broad clinical applications. 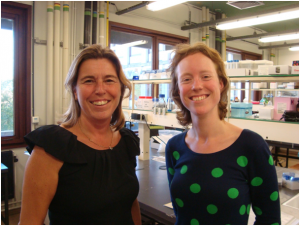 In a short talk, I presented a recent study performed in the lab of Prof Delzenne, in collaboration with Dr Neyrinck, and investigating the potential benefits of some microbiota-targeting nutrients in a mouse model of cancer cachexia.

Cancer cachexia is a complex metabolic syndrome characterized by a loss of fat mass and muscle mass. Cancer cachexia impairs lifespan and quality of life and can even be a cause of treatment discontinuation (Fearon, Arends, Baracos, Nat Rev Clin Oncol 2013). We showed two years ago that gut microbial dysbiosis occurs in a mouse model of leukemia with cachexia (Bindels et al., Plos ONE 2012) and that administration of short-chain inulin-type fructans (a well-known prebiotic) reduced the accumulation of “leukemic” cells in the liver (Bindels et al, Br J Cancer 2012). Building up on these studies, we tested the hypothesis that two other non-digestible oligosaccharides (pectic oligosaccharides, POS, and inulin, a long-chain inulin-type fructan) modulate gut microbiota and confer benefits on the host in terms of cancer and associated cachexia.

We found out that POS and inulin differently impacted the gut microbiome. Inulin reduced cancer cell accumulation in the liver and this could be mediated by the increased levels of propionate and butyrate that were evidenced in the portal blood of the inulin-fed mice. POS blunted fat mass loss, which could be explained by a reduced β-oxydation in the adipose tissue. Complementary analyses were also performed to further investigate the gut-adipose axis.

Our ongoing research in the lab of Prof Delzenne ultimately aims to contribute to the formulation of science-based nutritional advice for cancer patients suffering from cachexia. In a broader context, specific dietary ingredients could constitute novel adjuvant therapies for cachexia and gastrointestinal side-effects of chemotherapy, for instance.

I am a PharmD with a PhD in Pharmaceutical Sciences. I did my PhD in nutrition and metabolism in the lab of Prof Delzenne (Université catholique de Louvain), working on the interest of gut microbiota modulation in the control of cancer progression and associated cachexia. I spent a year as a Postdoctoral Research Associate at the University of Nebraska-Lincoln (Prof Ramer-Tait and Prof Jens Walter) working on resistant starches and gut microbiota, where I acquired skills in gnotobiology and bioinformatics analysis. I am now a FNRS Postdoctoral fellow in the lab of Prof Delzenne.