Are we targeting the wrong bugs? Review of Missing Microbes, a book by Dr. Martin Blaser

In the book Missing Microbes: How the Overuse of Antibiotics Is Fueling Our Modern Plagues, Dr. Martin Blaser of New York University challenges the assumption that antibiotics are without harm.

“Do no harm” is a fundamental principle in medicine. It means that doctors are usually conservative with any treatment that might have risks, even if there’s a chance that it may heal the patient. So if doctors worldwide have been generous with antibiotics in past decades, it’s because they haven’t considered antibiotics very risky.

In the book Missing Microbes: How the Overuse of Antibiotics Is Fueling Our Modern Plagues, Dr. Martin Blaser of New York University challenges the assumption that antibiotics are without harm. He explains how, as an experienced doctor and researcher, he came to realize how these drugs might affect us in the long term.

“I’m not against antibiotics any more than I’m against ice cream – both great at serving their purpose – but sometimes there can be too much of a good thing,” writes Blaser. He makes a point of explaining how antibiotics have helped many of his loved ones, and even saved his own life when he had a case of typhoid fever. He looks back in history to “a golden age in medicine” in the mid-1940s when antibiotics helped curtail meningitis, scarlet fever, tuberculosis, and more. But he makes a strong distinction between those cases and the liberal and ‘reflexive’ use that he sees as so common now. When we take penicillin for an upper respiratory tract infection, he says, we are part of the problem.

Blaser’s message is that antibiotics are powerful. They kill bacteria – that’s their job – but perhaps they kill too many. There are at least a thousand bacterial species living in each person’s gut, and Blaser thinks wide use of antibiotics is causing the extinction of some important species, maiming the invisible ‘organ’ that helps keep us alive. These are microbes that are tailor-made to live with us. They have co-evolved with us, so losing them is losing a part of ourselves. 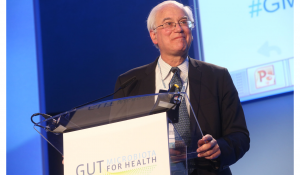 The effects of these extinctions are still up for debate in the scientific world, but in his engaging book, Blaser presents evidence that messing with the microbiota early in life leads to obesity later on. In a series of experiments, his lab discovered that mice given sub-therapeutic doses of antibiotics had more fat on their bodies than others; their bacterial diversity didn’t change, but the bacterial proportions and functions did change. Brief exposure to antibiotics early in life had a lifelong effect for the mice. In humans, there is evidence that children who receive antibiotics in the first six months of life are later prone to gaining weight, although the evidence is not of the strongest kind: it is correlational. Blaser takes his argument further, building a case that missing microbes early in life are associated in humans with chronic conditions like diabetes, celiac disease, IBD, allergies, and possibly even autism.

We can’t blame prescribed antibiotics for everything, though, Blaser points out. The microbiota of infants and children are disrupted in other ways, too. In certain countries (like the United States) antibiotics are present in many animal products they eat. And if a child was born by cesarean section (c-section), the process did not enable him or her to inherit the mother’s full library of microbes. Blaser says the problem is getting worse generation after generation, as children grow up with a slightly reduced microbiota.

The book does cover the famous problem of antibiotic resistance: how antibiotics kill all except the bacteria that have the machinery to resist, and these flourish in the body and resist the next antibiotic treatment; this resistance sets us on a path in which drugs will be powerless against specific infections. Blaser, however, keeps the book mostly confined to the issue of how antibiotics increase our susceptibility to chronic disease.

Not all scientists agree with Blaser. Getting at the truth in science is like the gradual chipping away at a block of marble with the hope of producing Michelangelo’s David – each observation, each study, reveals more and more of the finished product. In this case, the product is an understanding of the benefits and harms of antibiotics. These drugs have unquestionably done a lot of good, and time will give us a better idea of their risks.

Yet the actions Blaser recommends now are few, and sensible. Use antibiotics cautiously, he urges, and don’t take them “just in case”. Ban their use to fatten animals for slaughter, and improve birth practices to ensure women only have a c-section as a last resort. He points out, too, that with more research, we will one day understand how probiotics and prebiotics can help restore our missing microbes.