When seeking a causative factor for the onset of insulin resistance and low-grade inflammation that usually accompanies obesity and diabetes, in the past scientists have turned to bacterial lipopolysaccharide (LPS) as a triggering factor.

However, the causal role of gut microbiota in obesity and type 2 diabetes (T2D) remains elusive. While the vast majority of studies have focused on studying fecal microbiota in obese people with diabetes, little is known about the existence of microbial signatures in tissues and organs involved in metabolic control.

A new study by Anhê and colleagues uncovers a unique microbial profile in the liver, adipose tissue and plasma in people with morbid obesity and diabetes.

The authors investigated microbial signatures by using 16S ribosomal RNA gene-based bacterial quantification in plasma, liver and omental, mesenteric and subcutaneous adipose tissues. As happens with research into the placental microbiome, these tissues usually exhibit a low microbial load. In fact, important challenges to be tackled when studying their microbiome include low amounts of bacterial DNA; high amounts of polymerase chain reaction inhibitors; and bacterial DNA contaminants from the environment, reagents and consumables. Such limitations were overcome by carefully controlling for contamination during sampling and analysis; providing a contamination-aware analysis of different microbial profiles; and including extensive sets of controls for comparison.

Tissue-specific microbial signatures were identified, with a higher 16S rRNA gene count in the liver and omental adipose tissue, which are part of the anatomical route from the gut to the liver. By contrast, the relative abundance of bacterial deposits in mesenterial and subcutaneous adipose tissue and blood was lower.

While Proteobacteria and Pseudomonas were the predominant phylum and genus across all tissues studied, Arthrobacter and Ruminococcus were found most in the liver. Specifically, eight genera were more abundant in the three adipose tissues, including both gut-dwelling bacteria (Bacteroides, Faecalibacterium and Enterobacter) and environmental bacteria found in soil or water (Paracoccus and Acinetobacter). In plasma samples, however, the 16S rRNA gene count was similar to negative controls except for Rhodoferax and Polaromonas, which were more abundant in plasma than in negative control samples.

Interestingly, the authors revealed a unique microbial signature linked to diabetes. Compared with participants in the obese non-diabetic group, morbidly obese individuals with T2D showed a different microbial profile, with higher Enterobacteriaceae in the plasma and mesenteric adipose tissue, alongside a lower abundance of bacteria belonging to the phyla Firmicutes, Bacteroidetes and Deltaproteobacteria. A different abundance of taxa was observed in tissues from obese non-diabetic individuals. Altogether, these findings show that T2D may lead to specific microbial signatures in metabolic tissues, which are unrelated to obesity.

Taking into account that the authors did not explore gut microbiota composition, markers of bacterial translocation or enterocyte damage, it remains unclear to what extent the observed microbial signatures in metabolic tissues are the result of bacterial translocation from the gut to distal tissues or whether bacteria or their fragments are transported from the intestine lumen by immune cells, such as M cells or dendritic cells.

In conclusion, this is the first study providing convincing data of an alteration in microbial communities from metabolic tissues distal to the gut in obese and diabetic individuals. Together with previous research showing an altered gut microbiome in obesity and linking the Enterobacteriaceae family to poor glycemic control, these data suggest that it is time to complement gut microbiome research with tissue microbiota in the context of metabolic conditions. The presence of ‘tissue-associated microbiota’ that appears to come from not only the gastrointestinal tract but also from environmental sources deserves further research to better understand its physiological significance. 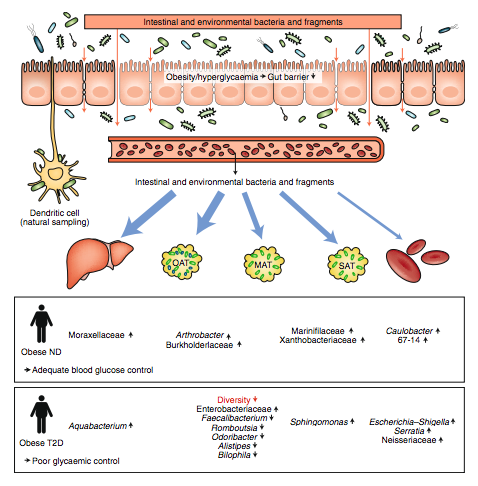 Professor Patrice D. Cani is researcher from the Belgian Fund for Scientific Research (FRS-FNRS), group leader in the Metabolism and Nutrition research group at the Louvain Drug Research Institute (LDRI) from the Université catholique de Louvain (UCL), Brussels, Belgium, and WELBIO (Walloon Excellence in Lifesciences and BIOtechnology) investigator. He is currently member of several international associations, he is member of the Alumni College from the Royal Belgian Academy of Sciences, and he has been elected in the board of directors of the LDRI (UCL). Patrice D. Cani has a M.Sc. in Nutrition and another M.Sc. in health Sciences, he is registered dietitian and PhD in Biomedical Sciences. His main research interests are the investigation of the role of the gut microbiota in the development of metabolic disorders, such as obesity, type 2 diabetes and low grade inflammation. More specifically, he is investigating the interactions between the gut microbiota, the host and specific biological systems such as the endocannabinoid system and the innate immune system in the context of obesity, type 2 diabetes and metabolic inflammation. Prof Cani is author and co-author of more than 110 scientific research papers published in peer-reviewed international journals, conferences and book chapters.