Metaproteomics help to get new insight on Crohn’s disease

Catherine Juste studied agronomic engineering, and then became Doctor of Science, specializing in nutrition and physiology. She became passionate about environmental microbiology and is currently developing environmental proteomics of the gut microbes at INRA. She developed an innovative preparative pipeline

Catherine Juste studied agronomic engineering, and then became Doctor of Science, specializing in nutrition and physiology. She became passionate about environmental microbiology and is currently developing environmental proteomics of the gut microbes at INRA. She developed an innovative preparative pipeline to explore myriads of bacterial proteins that are expressed in the lumen gut of human hosts, and that may have a crucial role in maintaining health or triggering disease. She used such an approach in the Crohn’s disease context. She published her result in January 2014 in Gut journal and highlights us the context and the main finding of the study. 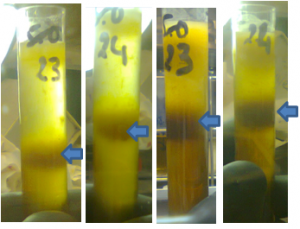 A workflow for the discovery AND confirmation of protein signals specific to CD-associated gut microbial communities. The microbiota were separated from the fecal matrix by flotation in a preformed Nycodenz continuous gradient.

What is the context of this study?

There are unmet needs for diagnosis, treatment and patient monitoring in Crohn’s disease (CD). No molecular marker has yet advanced to clinical use in CD. The intestinal microbiota recognised as an essential contributor to disease initiation and perpetuation and, therefore, represents an enormous reservoir for the discovery of novel signatures that could be used as biomarkers and predictors for different disease phenotypes or stages.

We first developed and validated a workflow for the discovery of protein signals specific to CD-associated gut microbial communities without any a priori assumption of the metabolic and/or cellular functions that can accompany CD. Then we developed a selected reaction monitoring (SRM) assay to confirm a set of candidates, as de novo development of ELISA assays would not have been feasible in a reasonable timeframe and poorly adapted to multiple verifications. In parallel, we used 16S rRNA gene sequencing for an integrated analysis of gut ecosystem structure and functions.

What was the most challenging part of this study?

The feasibility of extracting bacterial protein signals relevant to CD by interrogating myriads of intestinal bacteria, even from a small number of subjects.

What were the main findings? 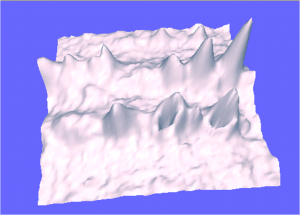 Spots of interest were robotically excised, and tryptic digest of each gel plug was analysed by nanoLC-MS/MS for protein identification. More than a dozen of CD-associated proteins were then validated using SRM-based targeted proteomics. (Credit: Catherine Juste – INRA)

The next step should be to validate the specificity and sensitivity of bacterial protein signals either in individual clinical trials with well-defined and homogenous CD populations, or in a comprehensive study with a larger heterogeneous patient cohort.

How your study could help clinicians in the future?