Elena Buelow published under Willem van Schaik's supervision her work about the monitoring of patients in intensive care units to assess the selective digestive decontamination using a metagenomics approach. She accepted to give us highlights of her study which give

Elena Buelow published under Willem van Schaik‘s supervision her work about the monitoring of patients in intensive care units to assess the selective digestive decontamination using a metagenomics approach. She accepted to give us highlights of her study which give new insight about the gut resistome.

1) What is your background?

I have obtained my Master’s degree in Medical Biology at the University of Amsterdam. The fusion of fundamental research with applied research and how this may contribute to a better understanding of human health and environmental systems has always been my main curiosity. The increased awareness of the important role of the human and environmental microbiota in the spread and dissemination of antibiotic resistance within the last decade prompted numerous research and studies to employ metagenomic and culture independent approaches to gain further insights in this field. I decided to study the impact of hospitalization and concomitant antibiotic therapies on the reservoir of antibiotic resistance gene (or the ‘resistome’) of the human gut microbiota during my PhD at the University Medical Center Utrecht, in the Department of Medical Microbiology, under the supervision of Dr. Willem van Schaik, Dr. Rob Willems and Prof. Marc Bonten. My research involves the application of several metagenomic approaches, such as functional metagenomics, metagenomic shotgun sequencing and high-throughput quantitative PCR. 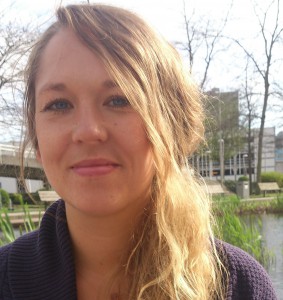 2) What is the context of this study?

Selective digestive decontamination (SDD) is an infection prevention measure for critically ill patients in intensive care units (ICU) that aims to eradicate opportunistic pathogens from the oropharynx and intestines, while sparing the anaerobic flora, by the application of non-absorbable antibiotics. Studies that evaluated the impact of SDD on the selection and spread of antibiotic resistance have so far been purely culture-based, and we therefore studied the impact of SDD on the gut microbiota and resistome of ICU patients by culture-independent approaches.
3) What was the most challenging part of this study ?

Besides setting up the clinical part of this study, I spent a lot of time on constructing high-quality fosmid libraries from fecal DNA for the functional metagenomic experiments. This had never been done before in my research group so I am very grateful to Dr. Brian Jones and Dr. Lesley Ogilvie of the University of Brighton for hosting me in their lab and teaching me how to construct these fosmid libraries. It still remains a labor-intensive method and is therefore limited to a relatively low number of samples.
4) What were the main findings ?

Our study is limited by the relatively small number of patients that were included. However, we are currently performing similar studies on microbiota and resistome dynamics in a larger ICU patient cohort. We would also be interested in culturing and characterizing the gut commensals that appear to form the reservoir of antibiotic resistance genes in the patient gut microbiota and to assess to what extent they can serve as ‘hubs’ for the dissemination of antibiotic resistance genes.
6) How your study could help clinicians in the future?

Our study highlights the large, but highly individualized effect of SDD and ICU stay on the gut resistome and may prompt clinicians to use quantitative PCR on resistance genes or metagenomic sequencing, as diagnostic tools in the future as this may aid in developing individualized antibiotic therapy regimens for hospitalized patients.