“[In] inflammatory bowel diseases, we know that environment is playing a role. The sheer dramatic rise in the incidence of them cannot be explained by genetics,” Gibson says. “For me, [diet] was the number one factor that was logical.” 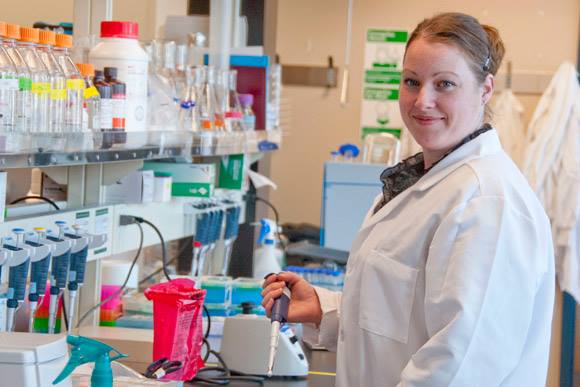 “We’re talking about people who are malnutritioned, especially pediatric populations. They really need nutrients and often their guts aren’t working properly and so they don’t absorb nutrients.”

Gibson’s lab studies a range of topics related to microbiota colonization and change in the gastrointestinal tract. Of the three major macronutrients — lipids, carbohydrates, and proteins — Gibson has zeroed in on lipids and how they affect the microbiota and inflammation in IBDs. “We have this general idea that all high-fat is bad,” she says, “[but] all high-fat diets aren’t the same.”

She explains, “The first thing I learned was that a high-fat diet doesn’t equal ‘evil’. It really depends on the type of fat that you are eating. A diet rich in olive oil, for example — even though it’s high fat — I found beneficial during colitis.”

“It’s really important that that message gets out to patients who need nutrients,” she says. “Because right now the message is, ‘Don’t eat a high-fat diet’. You’re taking one of the macronutrients away from a population who are malnutritioned, and I don’t think that’s correct. I think that they should in fact eat a high-fat diet, because fat actually can provide protective responses in the intestine when it’s the right fat.”

In the bigger picture of how to treat IBDs through microbiota modulation, Gibson says personalized dietary interventions will undoubtedly play a role. This will mark a change in clinical practice, since currently specific dietary changes are not routinely recommended for IBD patients. In addition, though, different strategies will be used to change microbiota for the long term — an area where science has so far come up short.

“We all were very excited about fecal transplants, and hoping that for an IBD patient, we could just wipe the slate clean and give them a whole new microbiota,” Gibson says. “But as we go through more studies, we understand that the microbes just return.”

Research could prove fruitful, however. “I think probiotics have the potential to be really powerful [for IBDs] because they certainly do have beneficial properties, but clinical trials have been pretty disappointing,” she says. “Probably one of the reasons is because probiotics die in a hostile environment like one found in an IBD gut or somebody with disease: inflammation and [an] oxidized environment. They don’t really know how to compete with the native flora, so they don’t have the right colonization factors.”

“What my lab is doing is trying to create ‘designer’ probiotics that have the ability to out-compete and live in the IBD gut, which is a hostile environment.”

From Gibson’s point of view, the most promising future strategy for modifying the microbiota in IBD is to use a more sophisticated method of fecal microbiota transplantation. “People are starting to figure out what’s inside the feces that’s important,” she says. “[We will deliver them as] probiotics, but ‘second generation probiotics’, if you will: something that’s a bit more intellectually designed [and] very specific.”