Since 2013, thousands of people have been voluntarily sending samples of microbes from their bodies to the laboratory of Dr. Rob Knight in Boulder, Colorado. The samples are analyzed as part of the American Gut project, a citizen science endeavor

Since 2013, thousands of people have been voluntarily sending samples of microbes from their bodies to the laboratory of Dr. Rob Knight in Boulder, Colorado. The samples are analyzed as part of the American Gut project, a citizen science endeavor funded by the participants themselves.

Since the project isn’t funded with existing grant money, the lab is trying to raise $20,000 through a Kickstarter campaign.

Jamie Binns, of Root House Studio, spoke with GMFH by phone about the project. 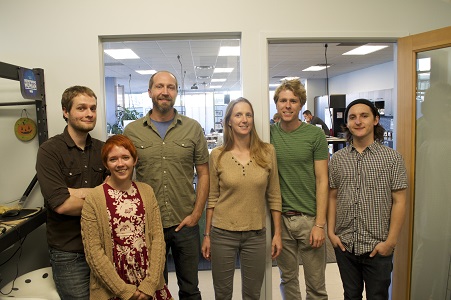 “Some people are talking about probiotics or talking about ways they can actually heal themselves, but… they don’t have a huge amount of research to back it up,” Binns says. “The problem is that there’s a lack of communication [of the science] to the public.”

This communication gap is what the documentary will address. Root House wants to take the vast amounts of data being generated by American Gut and frame it in a way that’s easily accessible to the public.

Root House plans to use engaging digital animation and live footage to convey their points. Binns says, “Part of what we’re hoping the first episode could be is to talk to a couple of [local] companies to see what they say: what is their viewpoint on the microbiome or probiotics, on health, and how it affects us? And then at the same time, talk to the American Gut scientists and go, ‘What does the science show?'”

He gives an example: “Upstart Kombucha, who’s one of our perks for this Kickstarter project, they brew kombucha. A lot of the kombucha industry is saying, ‘Kombucha can cure cancer, kombucha can help out your gut, it can do all of this.’ And what Upstart Kombucha is saying is, ‘There’s no scientific backing for that… we can’t claim that. Instead what we’re trying to do is… make kombucha a replacement for diet sodas and sodas, which a lot of people drink, and have been proven to be very, very unhealthy for you.'”

If the project is successfully funded, Binns says the studio has a plan of action: communicate with the American Gut scientists, use the Root House team to create the scenes, and engage with people to help grow the online community that is discussing the science of the microbiome.

Binns hopes the documentary will be a starting point for more science discussion. “If you could get enough people discussing anecdotally what has affected them – like people talking about how Crohn’s disease has affected them and what steps they took – if you can start to see trends, then it might encourage scientists to begin research [on] those things.”

He says the field could benefit from more bridging between scientists and the public; however, merging the two communities poses many challenges. “[In] a lot of the top-level academic communities, they expect everyone to be up to their expectations, but if you want open science you have to allow people to have that learning process.”

The open science focus means the documentary will be freely available on Youtube and other sites after it’s produced. “We’re trying to get engaged with as many people as possible, so we don’t want to try and make money on it after it’s been completed,” says Binns.

Root House also hopes that people who speak other languages will watch the documentary and upload it with subtitles.

Binns says, “I have been very interested to see how the microbiome affects me personally, which is why I’m trying so hard to engage with the community, build the community, and share this with as many people as possible. Because there is a possibility that a lot of things have been affected by our microbiome.”

To contribute or see the current totals of the Kickstarter campaign, see here.

Bioaccumulation: a new perspective in the drug-bug story

In Western world, the incidence of autoimmune and autoinflammatory diseases has been significantly increasing and also the use of non-antibiotic drugs for their treatment. Scientists at EMBL and Cambridge University elucidate how common drugs accumulate in gut bacteria and potentially reduce medication’s effectiveness.