It has been previously hypothesized that gut microbes could control a host’s eating behaviour through several potential mechanisms, including microbial manipulation of reward pathways, production of toxins that alter mood, changes to receptors (including taste receptors), and interference with neurotransmission via the vagus nerve—the main neural axis between the gut and the brain.

It has been previously hypothesized that gut microbes could control a host’s eating behaviour through several potential mechanisms, including microbial manipulation of reward pathways, production of toxins that alter mood, changes to receptors (including taste receptors), and interference with neurotransmission via the vagus nerve—the main neural axis between the gut and the brain. In this context, it has also been postulated that one way to change a host’s eating behaviour and nutrient acquisition is by intervening in the gut microbiota. This constitutes a new approach that may offer insights in the management of obesity and unhealthy eating.

A recent clinical study, led by Prof. Gary Frost from the Department of Medicine at Imperial College London, has found that colonic propionate produced by gut microbes may affect reward-based eating behaviour via central mechanisms.

It has been previously shown that metabolites produced by the colonic microbiota -postbiotics, which mainly include the short-chain fatty acids (SCFAs) acetate, propionate, and butyrate- may affect central appetite regulation. However, there are no studies showing the impact of SCFAs on human brain food-reward responses that influence eating behaviour.

The researchers investigated the relationship between colonic propionate production and energy intake and brain anticipatory reward responses during food picture evaluation. In a randomized crossover design, 20 healthy non-obese men aged 18-65 years underwent functional magnetic resonance imaging (fMRI) to measure activation by the blood oxygen level-dependent (BOLD) signal in brain regions involved with reward processing and hedonic eating, including the caudate, nucleus accumbens, amygdala, anterior insula, and orbitofrontal cortex, after consumption of a standard breakfast containing inulin (control group) or inulin-propionate ester (IPE) (treatment group). Both inulin and IPE are prebiotics. IPE is a dietary compound that selectively augments colonic propionate production and both inulin and IPE leads to comparable increase in acetate and butyrate production. Subjects attended 2 separate study visits, 6 or more days apart, after an overnight fast. Venous blood samples were collected to assay plasma and serum metabolite and hormone concentrations. Breath hydrogen concentration, a marker of colonic fermentation, was also measured. Visual analog scales (VAS) were completed to assess subjective appetite and mood rating. 300 minutes after inulin and IPE were administered, all subjects underwent a 60-minute fMRI to measure activation by the BOLD signal in brain regions involved in reward processing during an established food evaluation task that used food pictures either high in energy density (e.g., pizza, cakes, and chocolate) or with low energy (e.g., salads, vegetables, and fish) . Data on food intake was also recorded and analysed in the end of the study in 8 subjects. 18 of the subjects had analysable fMRI data. 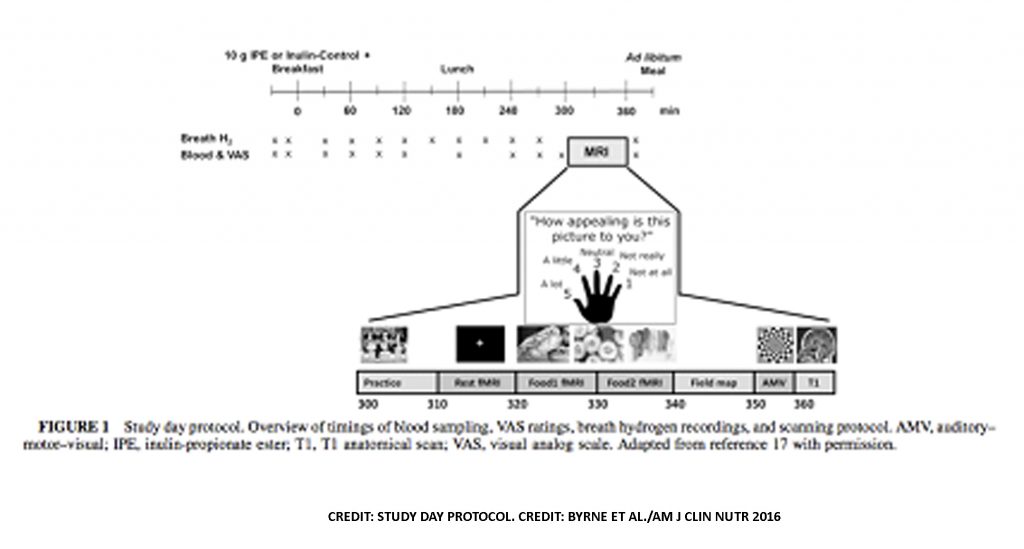 It was found that increasing colonic propionate through intake of IPE reduced the BOLD signal during food picture evaluation in both the caudate and nucleus accumbens, and this was greater for high-energy than for low-energy foods. Furthermore, increased colonic propionate production also reduced the subjective appeal of high-energy foods and reduced ad libitum energy intake. These observations were not related to changes in blood peptide YY (PYY), glucagon-like peptide 1 (GLP-1), glucose, or insulin concentrations.

In conclusion, these researchers demonstrated for the first time that an acute increase in gut microbiota-produced colonic propionate significantly reduced anticipatory hedonic responses to food in the human brain regions associated with reward processing and hedonic eating behaviour.