Professor Paul O'Toole of University College Cork (Ireland) recently gave a seminar as part of the Collège de France symposium: Diet-Microbiota-Health Interactions in Elderly People. Afterward, he took the time to speak with Gut Microbiota for Health about the event.

Professor Paul O’Toole of University College Cork (Ireland) recently gave a seminar as part of the Collège de France symposium: Diet-Microbiota-Health Interactions in Elderly People. Afterward, he took the time to speak with Gut Microbiota for Health about the event. 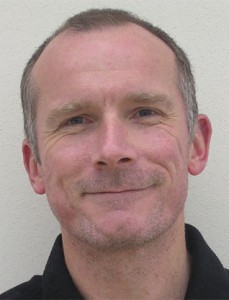 1) Can you give us a brief overview of your College de France symposium talk?

I began by reviewing what’s been published about our studies on the elderly gut microbiota. The first major observation being that where you live determines your microbiota type. It transpired that that was driven by diet… people living in long-term residential care tend to eat a narrower range, a less diverse diet. Then they get a low-diversity microbiota as a consequence. The main outcome of [our] study was the fact that the low-diversity gut microbiota correlated with poor health indices across a range of different parameters. And the main ones were sarcopenia, inflammation, and loss of cognitive function. That work was published in Nature two years ago.

We believe that loss of diversity in different ways is impactful in different conditions at different stages in the life span. But the key question is: What actually is changing in the microbiota? [That is to say,] what metabolic activities are being lost? I went on to describe briefly a European community project called NU-AGE [pronounced “new age”], which is a dietary intervention in 1250 European citizens across five recruitment centres, and that’s still ongoing. .. And then I described our analyses of the stability of the microbiota, because there’s an interest in how stable your gut microbiota is, and it seems that in healthy adults it’s relatively stable. It turned out that the lower the diversity of the microbiota, the less stable it was. Which fits with general ecological theory, whereby a diverse ecosystem is more robust and more resilient to external perturbations, whereas if the rainforest only has three tree species left it’s going to be pretty shaky.

I talked a little bit about methanogens – these are a species of archaea – so they’re a different domain of life, they’re not bacteria and they’re not eukaryotes, they’re ancient microbes. And they make methane. We described the fact that the elderly people in our study have a very peculiar community of methanogens in their guts, which we’re still working on. And the last thing I mentioned in my talk is that, in the past, I always get the question, ‘Ok, it’s fine if you’re living in the community and buying your own food and cooking it yourself, you’ve got a good diet. If you’re in long term care you’ll probably have a Sunday dinner every day and you’ll have a bad microbiota. What about people who live in the community who’ve got a low-quality diet?’ We went and found those internal positive controls, I call them, to show that, regardless of your initial health status, if you live in the community and you’ve got a low-diversity, poor-quality diet, you’ll have a correspondingly low-quality microbiota. So it sort of confirms what we showed in the cross-sectional analysis, and this also correlated with inferior health stats. So even if you’re living at home, the moral of the story is you have to have a high-diversity diet to have a high-diversity microbiota.

And then I gave some of my general hypotheses on the diagnostic value of the microbiota. So I believe in profiling the microbiota of people in a clinical situation to know what their current health status is, but more imporantly what their health trajectory is. In other words, if you have a person who’s been retired for five years, they’ve probably changed their diet but you don’t actually know what their current diet is. We can actually [infer] the diet with quite a bit of accuracy just from profiling the microbiota. Because we’ve got good correlative databases. And we can also tell from the microbiota profile where they stand in terms of these health indices I’ve talked to you about, like inflammation, muscle loss, and cognitive function. We believe the microbiota has diagnostic and prognostic value in elderly healthcare management.

2) What struck you most during the College de France event?

It’s probably the fact that awareness of the microbiota is permeating so many different fields of human biology. So for example there was a talk about microbiota and regulation of bone mass. Osteopenia: we all know that post-menopausal women are particularly at risk for fractures. And some of that is driven by inflammation. And inflammation is controlled to a degree by the gut microbiota… So I think that after a period of around five years where people have been describing correlations of the microbiota with this and that, things are calming down a bit. We’re a little better positioned to develop hypotheses based on research. And all of these exciting physiological connections. It’s not going to be easy because there’s only so much you can do in animal models and ultimately you want to be [applicable to] humans. I mean, the physiology of mice is different from humans, never mind the microbiota. So we’re going to have to do a lot of work in humans.