Marion Leclerc is a French microbiologist working at INRA  (the French National Institute for Agricultural Research) Jouy-en-Josas Centre. She spoke with Gut Microbiota for Health about her various areas of research. Research group of Marion Leclerc   What research are

Marion Leclerc is a French microbiologist working at INRA  (the French National Institute for Agricultural Research) Jouy-en-Josas Centre. She spoke with Gut Microbiota for Health about her various areas of research. 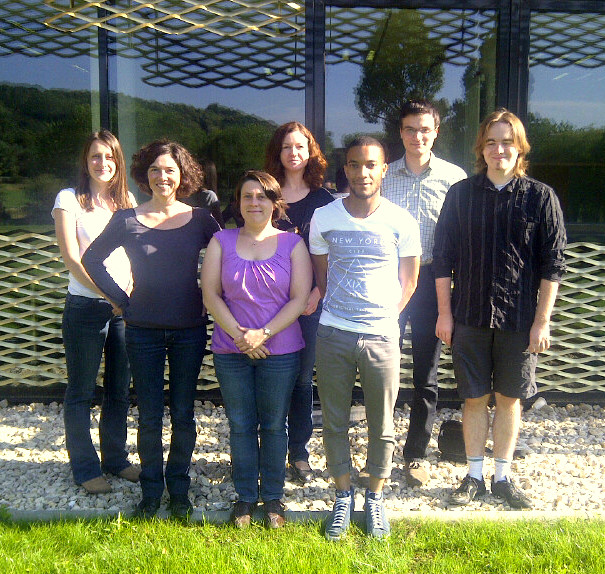 What research are you doing on functional characterization of the gut microbiota?

I am now [cooperating] with Patricia Lepage… we have different projects where we try to go from known dysbiosis at the phylological level into a more functional aspect. We were involved [earlier] in doing metatranscriptomics in Crohn’s disease patients, so now we have a big project financed by INRA. It’s called the [MEM MUCOMICS] program, where we count the expressed genes in the mucosa of patients with Crohn’s disease. We also add a little bit of metabolomics because I’m just back from a very interesting sabbatical in [the] Trent Northen lab in Berkeley, where we tried to combine the genes with the actual metabolites that are produced in situ in the mucosa of the patient in the inflamed area, and then the non-inflamed area — to link that with the host, and then the physiopathology. That’s one of the projects.

What Patricia [Lepage] brought recently, and it’s fascinating, [is] the link between the microbiota composition and the response to chemotherapy during cancer treatment. It’s a fascinating paper in Science that was just published where they show that, according to your microbiota… the antibiotic treatment that’s usually given to patients should or should not precede chemotherapy. Because some microorganisms would translocate and that could increase the efficiency of the immune system and the chemotherapy. I think it’s really fascinating, and we’re trying to get into those mechanisms. It’s linking the genes to what we know about the pathology… but also not forgetting the ecosystem and the physiology of those microorganisms.

Can you tell us about your research on prebiotics?

We started with the genes involved in fibre degradation. We published in Genome Research… we used this screening to figure [out] new families, new genes, and where those microorganisms come from.

We screened [those] libraries for prebiotics and what’s interesting is, as long as we screened we discovered that… not only [can] some functions be unknown or underrepresented, but also the microorganisms that are doing those activities may not be the ones we were expecting. We find organisms able to ferment or use these prebiotics that were not really known to do so.

What led you to study bacteriophages?

When I was in Monterey doing my postdoc in marine microbiology [at Monterey Bay Aquarium Research Institute in 2000]… I remember being in the microscope room and the guy showed me a picture of many, many tiny little dots… and bigger dots. In one mL of seawater, there’s 106 bacteria. Those were the big dots. And I thought, “Oh, what are the small dots?”  They’re 109 virus-like particles. It just struck me.

In 2005, when we were talking with Patricia [Lepage]… we decided to start working on bacteriophages at that time because it seemed like, from the ecological standpoint, if you have those microorganisms… you have to think that they could be competing for nutrients, that they could be killed by predators.

We published that first paper in Gut in 2008 where we looked at very simple experiments: virus-like particles at different parts of the gut of [healthy] patients. We got biopsies and fecal samples. It was really striking looking at those little dots, but more precisely at the electron microscopy. You see an incredible amount of bacteriophages that are located at the mucosa. So that was the start.

Now we would like to study the dynamics of bacteria and phages, and connect that to the metagenomic reads. Because if you do metagenomics you don’t really have a proper extraction protocol to get those free phages. What you get are the prophages, the ones that are inserted in the genome. So I think now that we have very interesting metagenomic data sets, we can combine those using the same samples and get the free phages… and then see how much [gets] into the bacterial genomes.

What are some of the challenges you encounter in your work?

At the beginning of the metagenomic era… we didn’t have a lot of commensal bacteria for which the genome was sequenced and available. So there was a discrepancy between the commensals we wanted to study and the genomes we had that were, until recently, from pathogenic microorganisms.

But the effort at the world level of sequencing the metagenomes in Europe and sequencing genomes from commensals in the US really helped a lot. Now [when] we do the bioinformatics we have more references to map the genes onto. That’s a problem other ecosystems have and we don’t have as much. It’s really improving.

If we’re working on humans it’s very difficult to get representative samples and enough samples to study what you want, and in a way that it’s statistically relevant. The only way to do so is to have very strong collaboration with clinicians. But the access to samples and to the metadata that are associated is tricky if you want to go all the way to the humans.

It’s very interesting to see the measurements and data that people expect in different fields. And that’s sort of a challenge to try to apply the microbial ecology models in a clinical setting. And then the opposite is, we don’t realize of course the challenges that clinicians face. So I think merging the different perspectives our domain is really fascinating.

When you talk to mathematicians — because I think mathematical modelling is mandatory — [the] experimental protocol they tell you to do is really not what you would have done. Sometimes the models tell you not to do so many measurements on one parameter, but another parameter is completely missing and that’s the one explaining some of your functioning of your system.

So I think the challenges have to be taken in a global way when you study the human gut microbiome.

What are the limits of the animal models that many researchers currently use?

The mouse models are not humans: the microbiota is different from the human system, but they’re a very good model to look at mechanisms.

From what we see, when we try to go to human cohorts on a topic that has been worked on in the animals, we face this incredible individual variability in the healthy human. It’s fascinating, but we really don’t know what explains this large variability.

I just wish we were working more on systems that might be closer to the humans like the pig, for instance,… It’s more expensive but it’s more relevant if you compare the physiology.

What have been the most satisfying moments in your research this year?

I would like to mention, for Patricia [Lepage], the collaboration [at] Gustave Roussy and how it led with Professor Zitvogel to a very fascinating paper in Science. When you see someone working with you getting this type of recognition of her work, I’m sharing this joy as if it were myself.

Very recently my former PhD student Rafael Muñoz-Tamayo from Colombia just got a permanent scientist job at INRA and that’s really a highlight for me because it means that the science we’ve done together didn’t ‘[back] him into a wall’… it’s a great moment for me.