Interview with Giovanni Barbara, MD PhD – Speaker at the #GMFH2014

Professor Barbara’s main scientific interest is in functional gastrointestinal disorders, including constipation, irritable bowel syndrome and diarrhea. These conditions have been considered for a long time mood disorders. However, there is clear recognition that peripheral and environmental factors as well 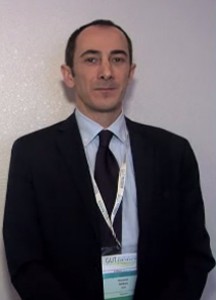 Professor Barbara’s main scientific interest is in functional gastrointestinal disorders, including constipation, irritable bowel syndrome and diarrhea. These conditions have been considered for a long time mood disorders. However, there is clear recognition that peripheral and environmental factors as well as the intestinal microbiota participate to their pathophysiology. Subsets of patients develop these condition after a bout of infectious gastroenteritis, there is substantial evidence indicating that microbiota manipulation with dietary intervention and probiotics can ameliorate symptoms. The field is also expanding rapidly beyond the gut with exciting data indicating that gut microbiota is involved in the development of anxiety and depression and behavioral responses implying a potential role of microbiota also on the central component associated with functional bowel disorders.

1/ The field of gut microbiota studies has rapidly evolved in recent years towards clinical applications. What are according to you the following steps of this trend?

There is no other example in modern medicine of such a rapidly growing field of investigation as the intestinal microbiota. This interest has already generated exciting practical applications bringing microbiota into central stage in clinical medicine. The identification of different profiles of intestinal microbiota between health and disease states (eg, inflammatory bowel disease, irritable bowel syndrome, obesity, type 2 diabetes and cardiovascular diseases) may pave the way to the development of microbiota biomarkers to diagnose diseases, stratify patients and predict responses to a therapeutic intervention. The human metagenome is far more plastic than the human genome and susceptible to manipulation with dietary, prebiotic and probiotic interventions. While the use of fecal microbial transplantation has led to extraordinary results (eg, >90% cure rates of recurrent C.difficile infection, reduction of insulin requirements in diabetic patients) a more targeted, personalized and less invasive intervention is advisable. This would be best performed by identification of microbiota communities from healthy donors with therapeutic potential and their isolation preparation and delivery as orally administrable probiotics. The therapeutic use of bacteriophages targeting resident pathobionts and exogenous pathogens is another exciting future trend in clinical medicine.

2/ This edition of the GMFH Summit has a specific focus on clinical aspects. How can research best accompany clinical studies in the field of gut microbiota?

The field of intestinal microbiota has been neglected before the advent of high throughput molecular techniques. Also, fecal microbial transplantation and probiotics have been used empirically until recent years. Research has been essential to give credibility to this field of science. Although we have already obtained a huge amount of information, we have just scratched the surface. The robustness of the current findings needs to be consolidated in larger scale studies and in longitudinal as opposed to cross-sectional studies. We need far more information regarding not only the composition of the intestinal ecosystem, but also the function of the microbial communities. This process is already on its way, but will need strong efforts, and more analytical tools to better understand the role of relevant microbiota-derived molecules in the context of disease.

3/ What is your greatest expectation from the GMFH Summit 2014? What are, for you, the main benefits of the event?

The knowledge on intestinal microbiota is growing quickly. The GMFH Summit 2014 will bring together leading experts from Europe and the US actively involved in the field of microbiota, thus providing an extraordinary opportunity to better understand the role of intestinal microbiota in health and disease as well as gaining practical knowledge for daily clinical practice.