Interview with François Leulier, PhD – Of Drosophila and Microbiota

Can you tell us a little bit about you and how you got interested in Gut Microbiota?   FL: I was trained as a geneticist. As a PhD student (2000-2003), I worked in a lab that used the Drosophila fly

Can you tell us a little bit about you and how you got interested in Gut Microbiota?

FL: I was trained as a geneticist. As a PhD student (2000-2003), I worked in a lab that used the Drosophila fly  as a model for research. My scientific questions were on immunity (infection resistance, especially those of bacterial origin) in Bruno Lemaitre’s lab.

With a genetic approach we characterized signaling pathways like NF-kB, which control the immunological response. There was the famous toll pathway that owed Jules Hoffman the Nobel Prize, based on my PhD supervisor’s work. My own work focused on the IMD pathway, which is essential for most anti-bacterial responses, whereas the toll pathway is more specifically engaged upon fungal infections and specific bacterial infections.

Then I went for a PostDoc (2003-2006) to the UK and worked on other biological processes such as cell death, while keeping an eye on innate immunity and pathways. We identified a negative regulator for the IMD pathway. The question thus shifted from “what triggers the immune response?” to “how is the response controlled?”. Thanks to our genetic approach and the study of the mutations of this negative regulator, we highlighted a “buffer” mechanism of the immune response. During the infection, we clearly need a balancing effect for the immune response, otherwise it has negative incidence. We then observed that, in the mutant of this negative regulator, there was a constitutive activation of the immune response even in the absence of infection. With this observation, we asked ourselves where it came from. That is how we started getting interested in the microbiota. Indeed we knew most animals, including flies, carry commensal bacteria and we tested whether those would be responsible for the priming of the constitutive immune response observed in our mutant. That was the case, in a mutant animal deprived of commensal bacteria, the ectopic response was gone! This result pushed me towards the study of the microbiota. Indeed I started to wonder about what those bacterial communities were, what they were composed of, what they exchanged with their host.

To sum up we became interested in the gut microbiota because we had questions on the genetics of the immune response. 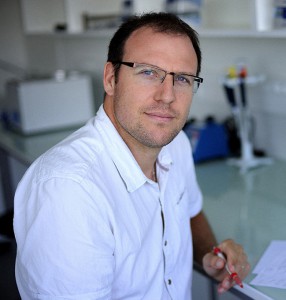 High throughput sequencing was not common at the time of your PhD and PostDoc. How is it conceivable to work on questions related to the Gut Microbiota without this technology?

FL: This technology isn’t key for us since the animal model we use, Drosophila melanogaster, harbors at best 10 different bacterial species, not more, even less in the clean culture condition of a research lab (3-4 species maximum).

With today’s tools, there’s evidence that the genetic potential of a given microbial community is of greater interest than its actual microbial species/strains composition. Does the same phenomenon exist with the Drosophila?

FL: I fully agree with this. We have recently provided evidence that certain commensal bacteria, in our case some Lactobacilli,  promote Drosophila juvenile growth upon mono-association with their host and actually recapitulate the effect of a more complex community. What’s interesting is that Won-Jae Lee’s group in Korea showed similar results with a totally different bacteria, an Acetobacter species. This extreme case where only a single strain recapitulates the effect of the community proves that biological functions provided by a commensal community are shared among community members and may be redundant. In this case those two different species have a similar function promoting growth.

Is your field of research affected by the recent technological turn?

FL: Clearly not. Our observations go along a continuous line independent from technology. Bacteria that thrive in the Drosophilia gut do not have a problem with oxygen. We are in an aerobiose logic. That’s a big difference with the study of the human gut microbiota. The interest is that the majority are Enterococci, Lactobacilli, also present in most mammals. For example, we find Lactobacillus plantarum, which is a commensal bacteria in mice and men. We can also find Acetobacter, a fly-specific bacteria, but that has some analogies with human commensals.

Now the question is on the role of those communities in the biology of their host. We want to fully analyze the underlying molecular mechanisms. We therefore work on a simplistic approach which is complementary to the system’s level approach developed in mammals thanks to the recent evolution of deep sequencing technologies. That is why high-throughput sequencing is less key for our field.

How can observations on a fly have conclusions on human health?

FL: That’s the principle of fundamental research: you describe results of scientific experiments based on solid evidence. You make conclusions and interpretations on the relations between a commensal bacteria and its host, its potential impact… then you ask yourself whether this concept is transferable to mammals. That is what we do with Lactobacillus plantarum. We observed an effect on juvenile growth with the Drosophila. That is a formal proof of impact of a bacteria on a physiological aspect of its host. Now we test whether those strains have an effect on mice models. We’re currently working on the translation to mice models and are confident we’ll find promising results.

If we take a wider perspective on the enthusiasm surrounding the intestinal microbiota, your work is quite alternative. What’s your opinion on the significance of the gut microbiota for human health?

Isn’t it too much? Don’t you think that too many people use the term “revolution” as a buzz word to promote their activity?

FL: Results published change opinions and make researchers and clinicians acknowledge that everything they didn’t understand is related to a neglected parameter that is now being rediscovered. It’s a re-birth of a topic that is 30 or 40 years old. People then were far more aware of the potential effects of the microbiota on our health and physiology. For the past 20 years the research community was far more focused on molecular biology. Microbiology wasn’t that trendy anymore. We’re reconsidering human and animal physiology with those commensals. The human genome is not the only element that has a role in defining what we are. Remember that there are 10 times more microbial cells in our body than human cells, providing 200 times more bacterial genes than human genes!

The revolution is that we now apply this “rediscovery” to apprehend the “normal physiology” but also more and more to the understanding of the physiology of pathologies. Clinicians and researchers  notice striking correlation between microbiota composition and/or activity and several inflammatory, atopic and metabolic pathologies, and even now behavioral diseases. Now the only thing missing is the link to causality. That’s where we do not have a problem with our fly! Because our phenotypes are all validated by a genetic approach. We can count on a robust mechanistic result on the association between a microorganism and a biological function. The ultimate idea is to translate this robustness to studies performed in mammals, with the hope of pointing out shared molecular mechanisms underlying commensals mediated influence on mammalian biology.

We read across the press that in the future patients could get from their family doctor a personalized probiotic cocktail based on the analysis of their gut microbiota. Do you believe in such therapies? If yes, do you think we could soon see their implementations?

FL: I have to admit that today I’m rather skeptical regarding this possibility. I think there’s still a lot of research efforts to be made in order to understand the physiological impact of an imbalance of the gut microbiota, the mechanisms involved.

But I do believe that we’ll be able to develop products such as probiotics or prebiotics adapted to specific conditions. When we work on Lactobacilli and their effects, we have in mind the possibility of therapeutic interventions. That is what we call “evidence-based probiotic”. In our lab, we have demonstrated that a strain of Lactobacillus had a clear impact on a trait, which is completely insulin-dependent, i.e juvenile growth. Our aim is now to check whether the strain that we identified using the Drosophila model may have an impact on mice growth. If it does, we may have a lead to intervene on human conditions linked to insulin resistance or deficiency.  In this case, we do not care about the actual commensal bacteria community composition but rather focus on the transient functional impact that a given bacterial strains may provide. The paradigm we envisage is a short intervention window which is probably less dangerous than molecular interventions. For me that’s the most convincing and fastest conceivable form of commercialization for therapeutic use.