Interview with Eric Brown, expert on gut microbiota and malnutrition

Eric Brown, Ph.D., of the University of British Columbia (Canada) recently gave a seminar as part of the Collège de France symposium: The Impact of Malnutrition on Host-Microbial Interactions in the Small Intestine. Afterward, he took the time to answer

Eric Brown, Ph.D., of the University of British Columbia (Canada) recently gave a seminar as part of the Collège de France symposium: The Impact of Malnutrition on Host-Microbial Interactions in the Small Intestine. Afterward, he took the time to answer some questions about the event. 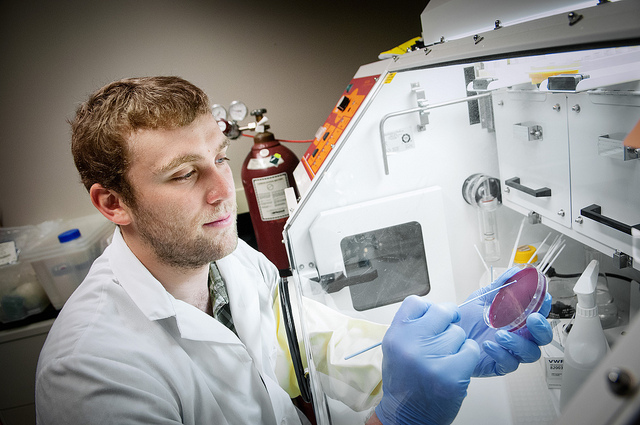 1) Can you give us a brief overview of your Collège de France symposium talk?

For my talk, I presented the research I have carried out over the past 3 years in researching the interactions between malnutrition, the gut microbiome and immunity. Specifically, I am interested in a disorder called environmental enteropathy. This is characterized by chronic inflammation, malabsorption, growth stunting and villous blunting in the small intestine independent of any known infectious etiology. This is primarily seen in developing countries with poor nutrition and sanitation. This disorder is now recognized as a major cause of childhood malnutrition. My hypothesis is [that] the microbiome plays a factor in the disorder. There is not much known about enteropathy, since it presents in the small intestine which is difficult to study in humans. Thus I sought to create an animal model to mimic this disease in order to understand the basic biology better. The research I presented was my work so far developing the animal model, which is at a point right now close to publication. I exposed mice to a malnourished diet, alongside a cocktail of microbes which triggered symptoms of enteropathy in mice. I see dysbiosis in the small intestinal microbiota, increased intestinal permeability, alongside changes in villous height and growth rate. With this model, we may be able to understand the disease mechanisms better.

There are not a lot of people studying enteropathy; however, interest is beginning to mount especially with the Gates Foundation funding so much of the research. There is always lots of talk on whether mice are the best models. You just need to be aware of the limitations and strengths of rodent models. If you ask the right questions they will give you relevant answers for human biology. People were also interested in my data from the small intestine microbiota since most studies were done on feces.

2) What struck you most during the College de France event?

As a North American, what struck me the most was meeting and hearing about the vibrant microbiome research community in Europe. Most if the speakers were European and it was an interesting look at the topics and research done in Europe. Many of the conferences I had been to in the past were much more USA-centric. Expanding [my] network by meeting more international researchers gave me some great perspectives on the state of microbiome research. Also, there was a lot of research nutrition-wise on obesity and the microbiome but I was the only speaker talking about malnutrition and microbiome. I think in the future this area is going to expand in relevance, based on feedback from my talk, and research from Jeff Gordon’s lab.

Eric Brown’s 2012 Tedx talk, How a Toilet Can Save Your Life, can be viewed here.