Dr. D. Brent Polk is a physician and professor of biochemistry & molecular biology. He is chair of the Department of Pediatrics at Children’s Hospital Los Angeles, as well as chair of pediatrics and vice dean for Child Health at the Keck School of Medicine of the University of Southern California.

Dr. D. Brent Polk is a physician and professor of biochemistry & molecular biology. He is chair of the Department of Pediatrics at Children’s Hospital Los Angeles, as well as chair of pediatrics and vice dean for Child Health at the Keck School of Medicine of the University of Southern California. His lab is located at The Saban Research Institute, where he also serves as director. 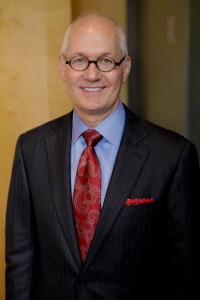 You study childhood inflammatory bowel disease (IBD). What is your current understanding of how it arises?

To date, what we can tell is that there are environmental, genetic, and other factors such as metabolic, that seem to predispose a subset of kids to develop inflammatory bowel disease. There’s been some significant advances in understanding, for that very early-onset inflammatory bowel disease, the particular relationship between the genetics of immunology, and triggers that are probably related to the gut microbiome, that result in IBD for kids under two years of age.

I think the best example of that is work by [the] NEOPICS group: Christoph Klein in Germany, Aleixo Muise in Toronto, and Scott Snapper [in Boston], who have identified and created this consortium looking at children with very early-onset IBD and have found some very interesting genetic factors associated with IBD.

Do you have an idea what the gut-microbiome-related triggers of IBD might be?

We have thought for some time [that] things like nonsteroidal anti-inflammatory drugs, and aspirin, could be triggers to induce alteration. From an epidemiology standpoint, there is association [between] prior use of those and increased incidence, or triggering specific episodes of IBD. So that one seems to have very strong evidence.

For children, [there’s also] the work out of [Denmark] looking at the use of antibiotics in the first few years of life, and a direct correlation between that and likelihood of having IBD, so that the more rounds of antibiotics you had received in early childhood, the more likely you were to have inflammatory bowel disease.

Can you tell us about your research on how “a protein produced by probiotic bacteria protects colon epithelial cells and treats colitis”?

This is a protein that we isolated a number of years ago from the secreted materials [of] one of the well-known probiotics, Lactobacillus rhamnosus GG. We had started trying to ask the question, ‘Is there any real science behind the field of probiotics that we could begin to exploit and understand how probiotics might be working in the host?’

Very early on, we saw that both the bacteria and the culture supernatant from the bacteria protected intestinal epithelial cells from injury, promoted their migration, and promoted repair in wound models. So we purified two proteins from that culture supernatant and then ultimately identified the genes and have sequenced those, and one of them we’ve been focusing on is… the p40 protein. p40 seems to be part of the cell wall of the bacterium, and it’s in a very small subset of bacteria. It’s not widely expressed. But it is expressed by Lactobacillus rhamnosus, and a few other Lactobacilli. It’s a unique gene that seems to have a metalloproteinase activity as well as some other biochemical functions, and we don’t know what it does exactly for the cell, for the bacteria on itself, but it’s been very difficult to knock it out of the bacterium and have the bacteria survive. So we think it’s either very important or really close to an essential gene in the Lactobacillus genome. We don’t yet fully know why the bacteria have this gene, because it’s not widely expressed and yet it seems to be essential for their successful survival.

In the epithelial cell… I’ve told you about the biology proliferation, migration, and protection from cell death — we’ve found that those effects are mediated by a protein we’ve been studying since I was a trainee, called the epidermal growth factor (EGF) receptor. It’s expressed on intestinal epithelial cells. In a study in New England Journal of Medicine many years ago, 85% of patients who got enemas with epidermal growth factor… went into remission. It’s a very famous study because EGF receptor is then associated with various types of cancers. [But] it really didn’t go anywhere as a direct therapy.

This [probiotic-derived protein] treatment allows us to be one step removed from actually giving the EGF, and what it seems to do is induce production of the body’s own form of epidermal growth factor, and release it for activation of the receptor. It’s like it turns on that pathway in a way [so] the body could regulate itself.

What do you think about fecal microbiota transplantation as a potential treatment for inflammatory bowel disease?

I think this concept of manipulating the microbiome for inflammatory bowel disease is going to prove to be a very important therapeutic approach, whether that is ultimately the use of fecal microbiome transplants from donors or whether it’s a more defined microbiome that is standardized and prepared in a purified way and becomes a controlled therapeutic, much like a microbiome drug. I think the latter is probably going to ultimately be the [way we will] go, but in spite of all the publications in this arena, I think we’re still just at the very beginning of this process.

[There was an] article in the LA Times about the woman recently who got a fecal microbiome transplant for her recurrent C. diff. from a donor who was obese, and she has now gained 40 pounds. I still think it’s very naive to believe that we know enough about the complexity of the microbiome to just take one patient’s fecal sample and give it to another patient and believe that we have addressed all the potential concerns.

I think that we still need more studies, and I know that there are some studies in the pipeline specifically looking at pediatric inflammatory bowel disease. The NIH [or, National Institutes of Health]… looks like they’re ready to support studies in this arena in a controlled way. I think we’ll be seeing lots of approaches to altering the microbiome of patients in the future.

What line of research in the field of inflammatory bowel disease do you think is going to yield the most powerful clinical insights?

One of the things that we have done is taking our mouse research and, looking at large data from those mice, taking that data to human available datasets, that are either available through the [Massachusetts Institute of Technology] at the BROAD [Institute], or at NIH through the GEO (Gene Expression Omnibus) data repositories, and looking at overlaps in biological pathways between the mice and the humans. We have taken those findings back to mice and successfully treated the mouse inflammatory bowel disease. We’re now looking [at whether there are] similar drugs that are already available for use in humans that might be redeployed for approaches in inflammatory bowel disease.

It’s what I’m most interested in at the moment. Mouse IBD — I’m not trying to say [it’s] the same as human IBD — but there are some basic, fundamental processes in which there seems to be overlap, and we now want to ask, ‘Is this the appropriate pipeline, that we go from mouse to human, back to mouse, and then go back to humans to test therapeutics?’ And because we’ve done this in a data-driven way, we can ask, ‘[Using] the genetics or the unique signature of a child with IBD who responds, can we predict that through this method?’