The Microbiota 2014 World Congress in Paris has gathered more than 500 participants from the scientific community and from the industry. These 2 days have been the occasion for top quality scientific presentations and exciting discussions on the recent advances

The Microbiota 2014 World Congress in Paris has gathered more than 500 participants from the scientific community and from the industry. These 2 days have been the occasion for top quality scientific presentations and exciting discussions on the recent advances in the field, as well as on the impacts and perspectives of microbiota on health and diseases. Research on the microbiota is only in its dawn, and the scientific community has just barely started to realise the phenomenal implications of our microbiota on our health and metabolism. This paves the way to exciting research and discoveries in the coming years, be it on biomarkers and personalised medicine, on the intriguing mitochondria-microbiota crosstalk, or on the implications of microbiota in longevity and metabolic diseases. On this occasion, I presented my work : “Strain specific lactobacilli-mediated promotion of host juvenile growth: innovative technique brings new evidence from strains belonging to several lactobacilli species”. 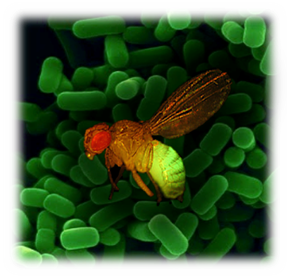 There is growing evidence that intestinal bacteria are crucial beneficial partners of their metazoan host. Recent observations suggest a strong link between commensal bacteria, host energy metabolism, and metabolic diseases such as diabetes and obesity. The drosophila microbiota has already been shown to restore host juvenile growth upon nutrient scarcity. More precisely, selected strains of Lactobacillus plantarum, a commensal bacterium of the drosophila intestine, have been shown to be sufficient on their own to recapitulate the natural microbiota growth-promoting effect. L. plantarum, and the genus Lactobacillus more generally, belong to Lactic Acid Bacteria (LAB), which represent the vast majority of probiotic microorganisms used in food fermentation and fortified food. In response to an increasingly strict regulation context on the probiotic market, innovative research on the team has led to developing a unique, simple and fast in vivo screening technology for qualifying new probiotic bacteria, and for quantifying their juvenile growth-promoting ability, especially in the case of nutritional challenges. Thanks to this innovative know-how, we have studied and described the influence of different lactobacilli species on juvenile growth upon nutrient scarcity, using drosophila as a relevant in vivo animal model.

We can precisely quantify the growth-promoting ability of a given bacterium thanks to our innovative in vivo screening tool. This cost-effective technology shows that a growth-promoting bacterium can sustain a 2-fold increase in larval size, compared to the germ-free condition, on a low-protein diet.

Our study shows that the growth-promoting effect described in monoxenic larvae monoassociated with L. plantarum can also be observed for other lactobacilli species, such as L. casei, L. paracasei, L. fermentum and L. rhamnosus. We have been able to highlight the fact that the growth-promoting ability varies in a strain-dependent manner within the same species. Other tested lactobacilli species such as L. delbrueckii spp. bulgaricus, L. brevis, or L. salivarius did not show such a growth-promoting effect in Drosophila larvae.

To further confirm the relevance of our Drosophila model, we have described and confirmed the same beneficial effect of some Drosophila-tested lactobacilli in monoxenic mouse models, supporting the preclinical potential of our research. In mice, monoassociation with a growth-promoting bacterium on a low-protein diet results in the restoration of body length, body weight and organ size. These phenotypes were correlated with a significantly increased IGF-1 level in the serum of monoassociated animals.

Our results pave the way to further functional studies aiming at determining the probiotic potential of a given bacterium, as well as deciphering its physiological role and metabolic implications, using the powerful and relevant drosophila/lactobacilli interaction model.

Innovative research, combined to a unique know-how, widens the field of action of our team, from functional research to industrial applications, especially for probiotic development. The probiotic market around the world, from dairy products to functional food, has experienced a tremendous growth over the last decades, and is expected to carry on growing in the coming years. The regulatory standards of probiotics in Europe have however been raised to an unprecedented level of strictness, the EFSA requiring strong scientific evidence of health benefit promoted by a bacterium. As a consequence, no submitted claim has been accepted in Europe since 2007.

In this difficult context, we plan on translating our innovative and cost-effective screening technology, so far used as an efficient research tool, into an applied technique that can bring new perspectives to the probiotic industry. We strongly believe that our unique technology can be useful in several fields related to probiotics, such as the food industry (functional food and feed, regular consumption, food supplements) and the pharmaceutical industry (probiotic therapy, disease prevention).

Thanks to our innovative tool, we are currently screening the team’s L. plantarum isolates library, so as to identify and later develop our own strongly growth-promoting isolates. In parallel, we are currently looking for industrial partners who want to qualify the probiotic potential of their bacteria libraries. Moreover, our simple and efficient technology can be used as a cost-effective pre-screen in more complex approaches such as clinical trials, in which it can funnel down the number of candidate bacteria to be tested in more complex and expensive models later on.

The great potential of Drosophila and its simple microbiota as an interaction model:

Lactobacillus plantarum is sufficient on its own to recapitulate the natural microbiota growth-promoting effect:

Insight into the underlying genomic diversity and versatility of L. plantarum:

Mélanie Mitchell studied biotechnology engineering at the National Engineering School of Luminy (ESIL) in Marseilles, France. After fruitful working experiences in varied fields, from Microbial Fuel Cells to Biogas production management, she has joined the research group led by Dr François Leulier, at the Functional Genomics Institute of Lyon (IGFL). The team aims at deciphering the molecular dialogue governing the mutualistic interaction between intestinal bacteria and their host. She is currently working at the meeting point between fundamental research and applied technologies, and strongly believes that building bridges between public research and the industry will create many exciting and challenging perspectives in the near future.