A new study, led by Professor Heinrich Jasper from the Buck Institute for Research on Aging in Novato (USA), has found that inhibiting age-related inflammation maintains a healthy gut microbiota and extends lifespan in flies.

A new study, led by Professor Heinrich Jasper from the Buck Institute for Research on Aging in Novato (USA), has found that inhibiting age-related inflammation maintains a healthy gut microbiota and extends lifespan in flies.

Aging in flies and humans is associated with chronic inflammation, several tissue dysfunctions such as metaplasias, and ‘dysbiosis’ of the commensal microbiota. Research at the Buck Institute has been focused on using the fruit fly Drosophila to reverse or delay metaplasias in order to extend lifespan.

The gastrointestinal (GI) tract of metazoans, such as Drosophila, is delimited by a series of highly specialized epithelia that include anterior midgut, middle midgut, and posterior midgut. The Jasper lab team showed that this compartmentalization affected the maintenance and composition of the gut microbiota. According to the researchers, this fact can be explained by the critical role of the copper cell region (CCR), which is found in the middle gut (the fly equivalent of the stomach), in influencing distribution and composition of the microbiota. Age-related metaplasia drove CCR decline in the Drosophila’s middle midgut, and changes in the distribution and composition of the commensal microbiota finally triggered an age-related intestinal dysfunction. 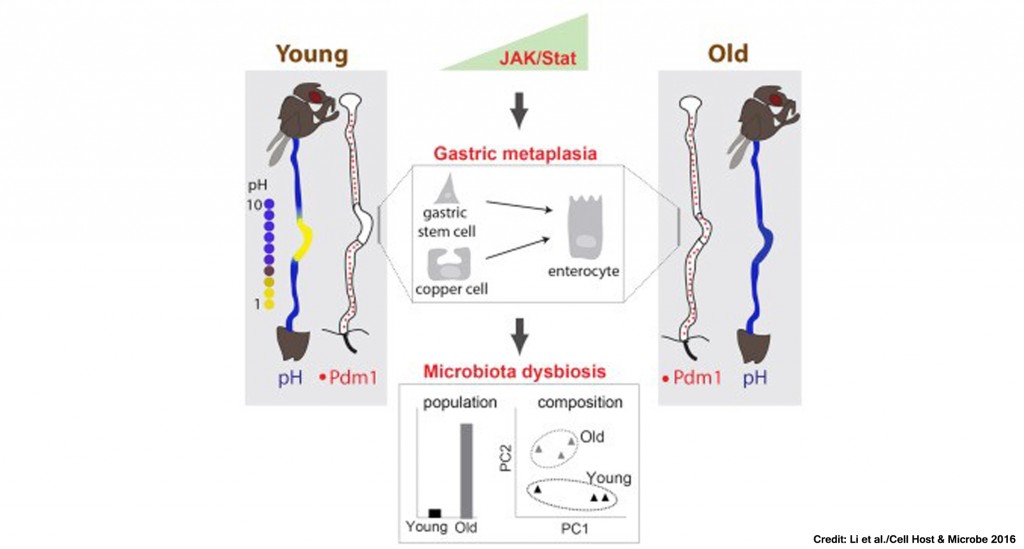 The research showed that in older flies, an age-related increase of the Janus kinase/signal transducers and activators of transcription (JAK/Stat) activity, induced by increased cytokines from the gut and/or fat body (termed unpaired ligands), caused CCR loss and metaplasia. This resulted in GI tract pH imbalance, microbiota dysbiosis, inflammation, and intestinal dysplasia. Interestingly, these effects were reversible. By inhibiting JAK/Stat signalling, researchers prevented metaplasia, maintained healthy bacteria phenotypes in the gut, and extended lifespan in the flies by up to 18%.

Taken together, these results show that chronic age-related inflammation may predispose a host to JAK/Stat-induced metaplasia. In Drosophila, this metaplasia leads to an imbalance of the microbiota, resulting in pathologies that include stem cell deregulation along the GI tract.

“These findings have implications for human disease, as metaplasia is the first step in the development of Barrett’s esophagus and some forms of colon cancer, whereas the underlying mechanisms remain unclear”, said Professor Jasper.

Although these are promising results, researchers advised caution in recommending the use of probiotics for mitigating age-related impacts on the human intestinal microbiota.