In new understandings of IBS, diet and probiotics emerging as promising treatments

When talking about irritable bowel syndrome [IBS], Dr. Eamonn Quigley eschews the term 'functional disorder'. For Quigley, a gastroenterologist and researcher at Houston Methodist Hospital (USA), it's only a matter of time before the disordered physiology of IBS becomes clear.

When talking about irritable bowel syndrome [IBS], Dr. Eamonn Quigley eschews the term ‘functional disorder’. For Quigley, a gastroenterologist and researcher at Houston Methodist Hospital (USA), it’s only a matter of time before the disordered physiology of IBS becomes clear.

“First of all, I think it’s a ‘real’ condition, one that we can recognize fairly readily, [even] given that there are tremendous variations in presentation and natural history,” he tells GMFH editors. 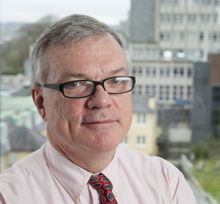 New gut microbiota research — outlined by Quigley in a 2014 review — is contributing to insights about the biological processes that generate IBS symptoms.

“There is quite a lot of circumstantial evidence to suggest the microbiome may be relevant. For example, we know that there’s a small group of IBS patients whose symptoms begin when they get enteric infections,” he says. “And secondly, there is a suggestion — but it’s controversial — that small intestinal bacterial overgrowth may play a role in some people, or at least induce symptoms.” Moreover, he explains, the benefits of probiotic therapy in IBS, as well as the small but significant impact of antibiotic therapy, point to involvement of the gut microbiota.

But do researchers actually observe gut microbiota differences between IBS patients and healthy controls? Quigley says, “More recently, there’ve been a number of studies looking directly at the microbiome and IBS, showing that there are changes… The problem is that those studies are not consistent between each other. But they do show that it’s different. Whether that’s a primary phenomenon, or whether that’s an epiphenomenon, or a reflection of bowel habit changes, is unclear.” Yet one key idea is emerging: “IBS is probably not one entity,” Quigley says. “In different individuals or subgroups you will find varying dominance of [certain] factors, all the way from gut motility and sensation, brain-gut interactions, immune activation, [to the] microbiome.”

Quigley is intrigued by the variation he sees in brain-related symptoms that accompany IBS. He says animal data show that even subtle changes in the microbiome can lead to shifts in mood and behaviour, and structural and functional changes in the central nervous system. Human data on the microbiome-gut-brain axis, however, are scant.

As a clinician, Quigley has had to use the best available research to make treatments available to his patients with IBS. “[We have had to] target symptoms based on what we understand of the pathophysiology of individual symptoms, [not of] the condition itself,” he says.

“In terms of the gastrointestinal symptoms, there are a number of studies that have shown benefits of probiotics and a recent meta-analysis showed that overall they did have an impact on symptoms,” he says. “Some of them seemed to work predominantly on symptoms like bloating. Others seemed to work better in people with diarrhea, others seemed to have more global effects. And some [didn’t] work at all. So it’s difficult to extract from that literature a single, unifying hypothesis. It’s also difficult to extract from that literature very strict guidelines as to who should take what.” The studies vary in quality, he adds.

Quigley maintains there may be synergies between dietary change and probiotics, as two parallel methods of modulating the gut microbiota. “[There is] good data to suggest that there is absolutely [a role for] dietary change,” he says, noting a number of studies on the low FODMAP diet, for example, showing that it may benefit some IBS sufferers in the short term. “But there’s also been a recent study showing that [the low FODMAP diet] may have some negative effects on the microbiome. It reduces the number of bifidobacteria, which of course are regarded as one of the important commensal organisms and may be particularly relevant to IBS.” Long-term effects, then, are still in question.

“Many dietary components are actually prebiotic supports,” Quigley continues. “Prebiotics will promote selective growth of certain bacteria, which could include the probiotic bacteria.” He points out that synbiotics — combinations of prebiotics and probiotics — have been investigated for IBS, but the studies to date have not been very robust.

“We need a lot more understanding of diet-microbiome interactions, and diet-probiotic interactions; that’s been an under-appreciated factor which is clearly critical.” Very few probiotic studies to date, he says, have controlled patients’ diets.

Quigley hopes he will see the day when, as a gastroenterologist, he has access to microbiome tools for personalized diagnosis and treatment of IBS in his patients. “Are there ways we can detect certain IBS subgroups based on microbiome signatures, and can that direct specific therapy?” he wonders. “I think that’s another area that we will move into.”

Where do we stand in the management of IBS? Highlights from “IBS days 2022” in Bologna

The third edition of IBS DAYS 2022 provided current advances and a look to future therapeutic approaches on the rapidly advancing field of irritable bowel syndrome. This article summarizes major highlights on diet and gut microbiome interactions of relevance for IBS.

Patients usually ask for microbiome tests to manage gut-related issues, to find out what type of diet or food supplement fits best and to get information about the risk of developing chronic diseases. But what kind of information do microbiome tests provide and how reliable are their results for clinical practice?