A recent review suggests that the peptide Ab associated with AD may have antimicrobial functions via a new pathway that involves trapping invading microorganisms, including bacteria (such as Salmonella enterica), fungi (such as Candida albicans), viruses (such as herpes simplex virus) and parasites (such as Toxoplasma gondii).

Alzheimer’s disease (AD) is the most common form of incurable dementia. On a cellular level, AD is characterized by the accumulation of extracellular aggregates of the amyloid-b peptide or Ab plaques (named amyloidosis) and intracellular aggregates of tau protein or neurofibrillary tangles in certain brain regions. Neuro-inflammation, or inflammation of the microglia (the brain’s macrophages), is also a consistent hallmark of the disease.

A recent review suggests that the peptide Ab associated with AD may have antimicrobial functions via a new pathway that involves trapping invading microorganisms, including bacteria (such as Salmonella enterica), fungi (such as Candida albicans), viruses (such as herpes simplex virus) and parasites (such as Toxoplasma gondii). One preliminary theory holds that AD could be linked to brain infection, which the generalized innate immune response fails to control and thus may lead to Ab plaque accumulation that cannot be effectively cleared by microglia. In the aged AD brain, the protective function of Ab fails and it has been suggested that other risk factors beyond infection are involved. A healthy gut microbiota could contribute to preventing systemic infection by limiting pathogen growth, maintaining barrier function, and training the host immune system. The reviewed data provide evidence for the role of microorganisms in neurodegenerative diseases such as AD.

However, the exact molecular mechanisms and causal chain of events leading to AD remain elusive. Given the role for gut microbes in modulating host immunity and brain function through the microbiota-gut-brain axis, recent research interest has focused on studying the role of intestinal microbiota composition in regulating neuro-inflammation in AD.

A recent study, led by Dr. Sangram Sisodia from the Department of Neurobiology and the Microbiome Centre at the University of Chicago in Chicago (IL, USA), has found that gut bacteria play a role in regulating immune system activity that impacts the progression of AD in a murine model of the disease.

The researchers administered high doses of broad-spectrum antibiotics to mice over 5 to 6 months. At the end of this period, antibiotic-treated mice showed a reduced gut microbial diversity and alterations in several circulating inflammatory chemokines and cytokines in the blood. Antibiotics also led to a striking reduction in insoluble Ab levels and amyloid plaque deposition together with elevated levels of soluble Ab in the brain, which attenuated plaque-localised microglial and astrocyte reactivity. Finally, antibiotic-induced perturbations in gut microbial diversity also influenced neuro-inflammatory responses by altering microglial morphology and plaque-localised glial reactivity. On the whole, these results suggest that persistent gut microbial dysbiosis regulates host innate immunity mechanisms that impact Ab amyloidosis.

“We don’t propose that a long-term course of antibiotics is going to be a treatment […]. We have to find ways to intervene when a patient starts showing clinical signs, and if we learn how changes in gut bacteria affect onset or progression, or how the molecules they produce interact with the nervous system, we could use that to create a new kind of personalized medicine.” 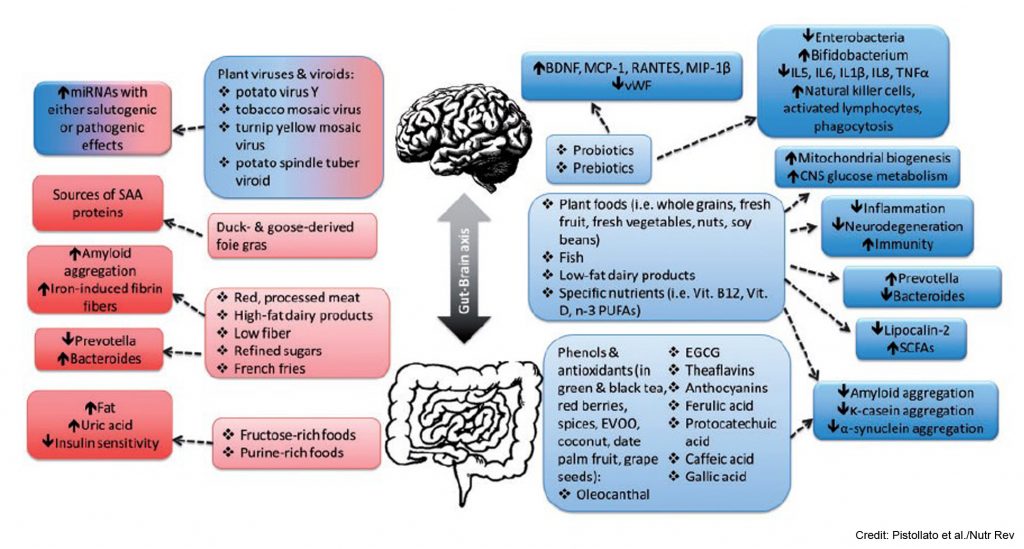 To sum up, the pathology of AD may be associated with disturbance of the gut microbiota. To date, it is known that antibiotic-induced perturbations in gut microbial diversity can influence neuro-inflammation and decrease Ab plaque deposition in a murine model of AD. Further research is needed in order to identify specific AD-associated microbes and study the effects of gut microbiota modulation as a potential preventative strategy for brain disorders.