Human ageing is characterized by a chronic low-grade inflammation, termed “inflammaging”, that together with sarcopenia (muscle mass depletion and the reduction of muscle performance) and physical frailty (the loss of muscle performance and normal muscle mass) are significant risk factors for both morbidity and mortality in elderly people.

A review, led by Dr. Tiziana Meschi from the Microbiome Research Hub at the University of Parma (Parma, Italy), concludes that gut microbiota may partly mediate the relationship between nutrition and both sarcopenia and physical frailty in older individuals.

The authors in the review first examined observational studies associating faecal microbiota alterations with ageing phenotype and the onset of physical frailty: 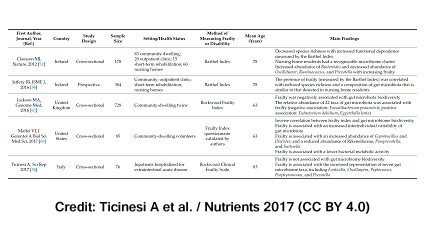 However, due to their cross-sectional design, these studies do not establish any cause-effect relationship between gut microbiota dysbiosis and physical frailty.

On the other hand, regarding human studies that have assessed the influence of exercise on gut microbiota, the majority of them used professional athletes and were carried out on adult subjects, which makes it difficult to know to what extent the exercise-induced modifications in the gut microbiota composition and functionality could be extrapolated to older individuals and targeted for healthy ageing (here, here and here).

Beyond its effects on the gut environment, the gut microbiota exhibits systemic effects through production of mediators that affect metabolism, insulin sensitivity, and inflammation. The authors emphasized the fact that many microbial substances derived from nutrients can be found in urine, blood and faeces and could act as metabolic or physiological modulators for the host. On the whole, glycine betaine, tryptophan, biliary acids, and short-chain fatty acids (SCFAs) are the most promising of the putative mediators that have an influence on myocytes’ mitochondria through several signalling pathways that result in the modulation of inflammation and the promotion of insulin sensitivity.

Short-chain fatty acids (SCFAs) derived from dietary fibres and proteins were reported as the most studied mediators of the effect of gut microbiota on skeletal muscle, as they can enter systemic bloodstream and be absorbed by skeletal muscle cells, in which their main target are skeletal muscle mitochondria. For instance, butyrate, a well-known SCFA, is involved in improving metabolic efficiency of myofibers and protecting muscle protein catabolism. On the other hand, acetate is another SCFA that correlates with increased insulin resistance and whose presence is detrimental for skeletal muscle anabolism.

When it comes to studies that have evaluated the effects of gut microbiota manipulation on parameters of muscle mass and function, the vast majority of them have been carried out on animal models. The administration of the probiotics Lactobacillus reuteri and F. prausnitzii to mice have been associated with the preservation of muscle mass and reduced systemic inflammation. In humans, the only randomized, double-blind clinical trial that has explored the effects of gut microbiota modifications on skeletal muscle outcomes has found that a prebiotic formulation including fructooligosaccharides and inulin, administered for 13 weeks, improved exhaustion and handgrip strength in 28 older individuals aged 65 and over when compared to placebo.

To sum up, based on the studies examined in the review, it can be concluded that the gut microbiota is potentially involved in the onset and development of primary sarcopenia in the elderly. The authors suggest the term “gut-muscle axis” when studying the field involving the role of nutrition in the pathogenesis of sarcopenia via modification of gut microbiota composition. As there is no evidence of a distinct gut microbiota composition in older sarcopenic patients, further research in humans is needed in order to elucidate whether gut microbiota-targeted interventions may contribute to healthy ageing.