I participated in the "Targeting microbiota" congress at Pasteur Institute because I considered the topics discussed very interesting and relevant to my research. For me microbiome conferences are still a rather foreign territory, but I very much like to talk

I participated in the “Targeting microbiota” congress at Pasteur Institute because I considered the topics discussed very interesting and relevant to my research. For me microbiome conferences are still a rather foreign territory, but I very much like to talk to people with a very different view from what I have. And my learning curve in the microbiome field is still quite steep. I personally was fascinated by the reports about segmented filamentous bacteria and their immunological effects.

I am fascinated by the idea that Parkinson’s could be actually originating from the nose or gut as suggested by, for example, Braak’s model (PMID: 12498954, Neurosci Lett 2006;396(1):67-72). The first neurodegenerative changes in Parkinson Disease (PD) are seen in the olfactory bulb and enteric nervous system. Correspondingly, most PD patients suffer from hyposmia and gastrointestinal symptoms, frequently years before motor symptoms evolve. Interestingly those two habitats are where our body gets mostly exposed to environmental agents, including microbes. 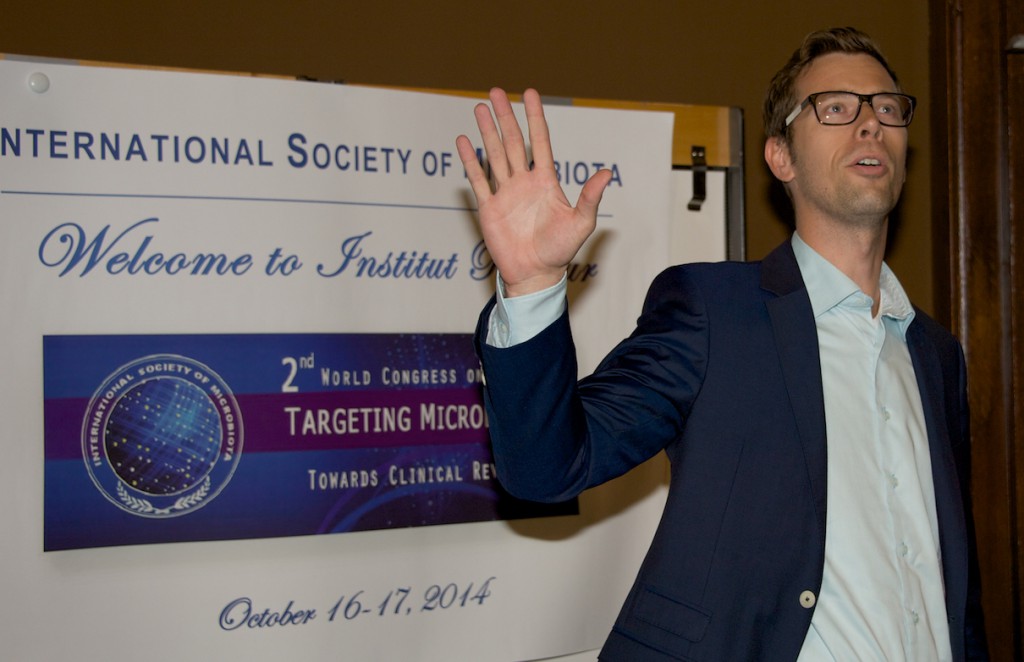 Previous attempts to identify microbes related to PD pointed to Helicobacter pylori and small intestinal bacterial overgrowth, but in the end had been somewhat inconclusive. But there possibly was a signal. At the same time I followed how the microbiome field was keeping pace around 2009/2010 with other areas of research fuelled by the development of next generation sequencing techniques. No one in neurology seemed to be interested in gut microbiota at that time. I thought that this could be a new opportunity to revisit the microbe theory in PD utilizing advanced methodology. In 2010 Petri, my co-PI, who is a genetics expert and head of our genomics lab, wrote an article in a Finnish medical journal about the new possibilities that next generation sequencing (NGS) offers for studying microbiota. After reading this article I contacted him and told him about my ideas and he was immediately excited. For both of us this was completely new territory. For me, since I had been doing neither Parkinson’s nor genetics or microbe research before, and for him, because he had not been involved in neurological research. But I guess in retrospect this may have been one key to succeeding in this endeavor since we were not primed by previous dogmas. So in the beginning there was a lot of reading and we set up a plan. We made an application to the Michael J Fox foundation to fund our rather unconventional pilot study.

One challenge was that the clinical part of the study needed to be completed within one year based on the contract with the Michael J fox foundation. So we really had a tight schedule. Regarding the scientific part I found it most difficult to figure out how to account for the many confounding factors and clinical variables that were related to our observations. Standard tools for microbiome analysis make it rather simple to compare community structures between two subject groups. However, it must be considered that there can be many other differences between PD patients and controls in addition to the mere fact that the patients have PD (e.g.medications, comorbidities, constipation). It was difficult to figure out how to account for these potential confounders. Since we did not find a ready solution for it we decided that generalized linear models could be useful here.

The fecal microbiome of PD subjects clearly differed from that of matched controls and this difference was independent of the potential confounders that we assessed. The most significant finding was the abundance of bacteria from the Prevotellaceae family was reduced by 78% in PD patients. On more detailed examination it turned out that, in particular, individuals with a high abundance of these bacteria were not present in the PD group. Consequently, a low abundance of Prevotellaceae was 86% sensitive for PD, but rather unspecific. However, by adding only 3 other bacterial families to the model, we were able to increase specificity for PD to 90%. So microbiome analysis performed quite well in distinguishing PD patients from control subjects. Another interesting finding was that, within the PD group, abundance of Enterobacteriaceae bacteria was related to the severity of postural instability and gait difficulty (PIGD). So there was a connection between gut microbiota and the motor symptoms of our patients. Our study is the first to demonstrate alterations of microbiome composition in neurodegenerative disease. With respect to previous research it is interesting to note that reduced abundance of Prevotellaceae has been reported also in children with autism spectrum disorder and type 1 diabetes (PLoS One 2013;8:e68322; PLoS One 2011;6:e25792).The mechanisms behind this association are not well understood, but it has been suggested that these changes could be related to a breakdown of the gut mucosal barrier, at least in diabetics. Recently, an impaired mucosal barrier has also been found in PD patients (Forsyth et al. 2011; PMID: 22145021) so our findings fit very well into this context. The same study also found that in PD patients Escherichia coli bacteria invade the gut mucosa which may be related to local inflammation and oxidative stress. These bacteria belong into the family Enterobacteriaceae that, in our study, was increased in patients with a PIGD phenotype. This group of patients has a worse prognosis than patients with a tremor dominant phenotype. Thus, it is interesting that exactly this group of bacteria came up also in our study using a completely different approach.

Our findings (Scheperjans et al. 2014) may point to a role of gut microbiota in PD and suggest that microbiome analysis could be useful as a PD biomarker in diagnosing PD. However, due to the case control design of our study we cannot make conclusions about the causality of the observed relationship. Neither can we tell whether microbiome changes have been present before PD onset or whether they developed afterwards.To answer these questions, larger prospective studies are necessary. We are currently conducting a two-year follow-up study on our subjects to study the temporal stability of the observed differences and the connection between gut microbiota and disease progression. Furthermore, we are assessing the mechanisms of microbiome-host interactions in PD and potential effects of diet in this context. The ultimate questions that need to be answered are whether the observed microbiome alterations in PD are present already before disease onset and thus could be involved in PD pathogenesis and indicate disease risk. In particular, we are interested to know whether Prevotellaceae could have a protective or therapeutic role in PD since virtually none of our 72 PD patients showed high levels of these bacteria in feces. One other explanation could be that a decrease of Prevotellaceae is just reflecting breakdown of the gut mucosal barrier, but not causally involved. Nevertheless, it could still be a potential biomarker. Ultimately, of course, we want to study whether treatments modulating gut microbiota could have symptomatic or even disease modifying effects in PD.

Lucky for us, no previous study has looked at the gut microbiome in Parkinson’s Disease :-) … in addition to the studies cited above, the following can give more insight into this matter:

I am German and studied medicine at the Heinrich-Heine-University in Duesseldorf, Germany and was a visiting student at the National Hospital for Neurology and Neurosurgery in London and at the Mount Sinai Medical School in New York. During my studies I started work on my doctoral theses in the C & U Vogt Brain Research Institute about the microscopical and neurochemical anatomy of the human parietal lobe. After graduating, I continued work on my thesis at the Institute of Medicine at the Research Center in Juelich. I received my doctoral degree and my thesis was awarded the best medical thesis in 2008 at Duesseldorf University. In 2007 I moved to Finland and started my clinical specialization in neurology. During this period I completed a 6 month fellowship in our clinical stroke research lab which gave me experience in the planning and conduction of clinical trials. I received my specialist degree in 2013.