Abundant evidence shows that particular aspects of human health and disease are attributable to the trillions of microbes that inhabit our gastrointestinal tract, collectively referred to as the gut microbiota. Consider that the number of unique genes contributed by the gut microbiota is greater than 150-fold that encoded within the human genome and that the vast number of metabolites produced by these organisms allows effects on distant organs. The composition of the gut microbiota is complex and in addition to bacteria includes viruses, fungi, protozoa, and Archaea. These organisms contribute not only to each other’s function and survival but humans have evolved to depend on the extended physiology and metabolism that the microbiota provides. The recent realization of the power of the gut microbiome in regulating human health and disease is a major advancement and provides a multitude of new and novel targets for the maintenance of health and prevention and treatment for some human diseases. The efficacy of fecal microbiota transplantation for recurrent Clostridium difficile infection provides strong proof of principle that manipulation of the gut microbiota can treat disease. Approaches for manipulating the gut microbiome through diet, pre- and probiotics, targeted antibiotic therapy, provision of specific cocktails of select bacteria, and fecal microbiota transplantation for health and disease are under investigation or use. The amount of literature published on this topic is expanding exponentially and includes animal and human studies, many of which rely on complex sequencing technologies and sophisticated bioinformatics analysis. Keeping abreast of this rapidly moving field and realizing how these findings could possibly be extrapolated to the clinical setting is difficult, yet an understanding of the mechanisms and potential clinical applications is imperative. The goal of the 2016 Gut Microbiota for Health World Summit is to provide just that. 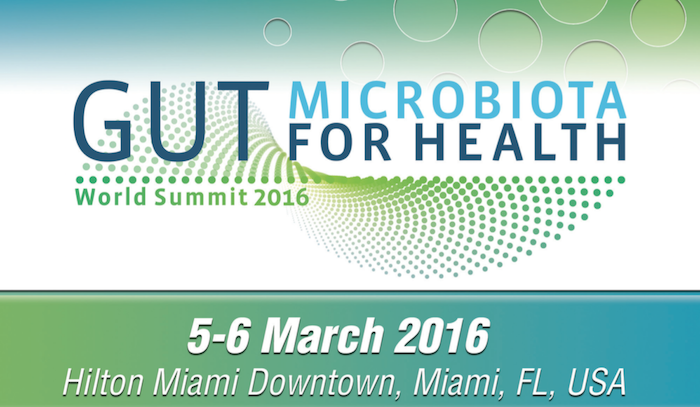 This international event will take place in Miami, FL from March 5-6, 2016.

The meeting has been organized by the American Gastroenterological Association and the European Society of Neurogastroenterology & Motility, and made possible by the generous support of Danone and Biocodex.

Day one of the meeting program consists of a plenary session and six workshops. Day two will include lectures and a panel discussion. We hope very much that you will join us for this dynamic and important program and look forward to welcoming you to the summit in Miami, FL. In the meantime, join us on the Gut Microbiota for Health Experts Exchange and follow us on Twitter: @GMFHx – Gut Microbiota for Health by experts, for experts from medical & scientific communities. Brought to you by ESNM.eu. Sincerely, Gail Hecht, MD, MS Professor of Medicine; Microbiology/Immunology Director, Division of Gastroenterology and Nutrition Loyola University-Chicago ——

Dr. Hecht is Professor of Medicine and Microbiology/Immunology and Chief, Gastroenterology and Nutrition at Loyola University Chicago. She earned her MD from Loyola University Stritch School of Medicine, completed Internal Medicine Residency at the University of Minnesota, Minneapolis, and her Fellowship in Gastroenterology at Brigham and Women's Hospital, Harvard Medical School. Her initial faculty appointment was at the University of Illinois Chicago where she rose through the ranks to Professor and was appointed Chief of Digestive Diseases and Nutrition. She relocated to Loyola in her current position in January 2013. She serves as Editor-in-Chief of a new journal Gut Microbes published by Landes Bioscience. Dr. Hecht has been very active in the American Gastroenterological Association functioning as Chair of the Intestinal Disorders Section of the AGA Council, as Basic Research Councilor to the Governing Board and ultimately serving as President from 2009-2010, only the second woman to serve in that capacity.

The last 9th Gut Microbiota for Health World Summit hold in Madrid on March updated the science behind diet, the balance between gut microbiota and the immune system, mental health, food intolerances and functional gut disorders, among others. Check out here the Summit’s official report.

How the gut microbiota can relate to preventing and treating gut-related symptoms and what is the role that dietitians can play as gut health ambassadors were some of the key subjects discussed in the scientific session on gut health during the 11th conference of EFAD, which was held in Rotterdam (the Netherlands) on September 29. EFAD is a federation of local dietetic