Since Elie Metchnikoff first linked gut microbes and intake of fermented foods to health and longevity, there has been increasing interest in how ageing affects the gut microbiota composition and functional diversity to promote health in the elderly. Associations between 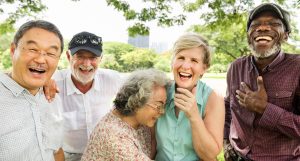 Since Elie Metchnikoff first linked gut microbes and intake of fermented foods to health and longevity, there has been increasing interest in how ageing affects the gut microbiota composition and functional diversity to promote health in the elderly. Associations between frailty and both species and genus abundance in the gut microbiota have been found in a previous study in female twins. Besides this, a recent study showed for the first time that age-related chronic inflammation, which is called “inflammaging”, may be a consequence of an altered gut microbiota composition: gut bacteria from older mice induced inflammaging when transferred to young mice. However, gut microbiota studies in large human cohorts of elderly individuals are lacking and the comparison groups used and the definitions of the aged populations differ between studies.

A recent cross-sectional study, led by Dr. Jiangang Li from the Tianyi Health Sciences Institute in Zhenjiang (Jiangsu, China), has found that the gut microbiota composition of healthy aged individuals in a Chinese population is remarkably similar to that of healthy 30-year-olds in the same cohort.

The researchers analysed via 16S ribosomal ribonucleic acid (rRNA) gene sequencing – using an approach that measured the amount of change between groups relative to the amount of variation within the groups, which allowed a focus on biologically-relevant differences rather than statistical significance- the gut microbiota of a cross-sectional cohort of more than 1,000 very healthy Chinese individuals who spanned the ages of 3 to over 100 years; these individuals were self-selected to be extremely healthy with no known health issues and no family history of disease.

The overall gut microbiota composition of the healthy elderly group was similar to that of people decades younger. Interestingly, the gut microbiota of males appeared to be more variable than that of females. The amount of difference between groups was almost the same as the variation within groups. The elderly cohort had a slightly greater relative abundance of Clostridium and a decrease in Faecalibacterium and Prevotella when compared to the younger members of the population.

The gut microbiota of exceedingly healthy elderly individuals up to 100 years old was very similar to that of healthy 30-year-olds in the same population, but whether this similarity is a cause of healthy ageing or a consequence of an active healthy lifestyle and diet remains unknown due to the cross-sectional design of the study.

In an online question-and-answer session with co-authors of the study, Dr. Greg Gloor suggested that the best explanation for the gut microbiome profile of the healthy Chinese elderly subjects is that the elderly group the researchers chose was particularly healthy, active and eating well. However, Dr. Gloor also emphasized that their gut microbiota could have also contributed to their good health. Specific dietary patterns of the healthy elderly were not evaluated in detail, so the results cannot be attributed to a specific Chinese diet.

One surprising result was that a major difference between sample groups (children from 3 to 14 years and adults from 19 to over 100 years) in the gut microbiota profile was found in those under the age of 30 years. The researchers identified a distinct gut microbiota composition in the 19- to 24-year-old cohort that has not been observed in large-scale analyses of other populations (here; here; here): it had a core microbiota with a constant relative abundance of Prevotella and Bacteroides genera and less abundance of Firmicutes, Blautia and Bifidobacterium. The researchers suspect this may have resulted from an altered diet, altered energy requirements or may be unique to this healthy cohort in China. This finding was replicated by rerunning the analysis with the inclusion of a second cohort collected from military and police training groups. Further research is needed in order to study the distinct gut microbiota of this group.

According to the study authors: “By studying healthy people, we hope to know what we are striving for when people get sick. [Our results] demonstrate that maintaining diversity of your gut as you age is a biomarker of healthy aging, just like low-cholesterol is a biomarker of a healthy circulatory system”.

In conclusion, the gut microbiota of healthy aged individuals in this study differed little from that of the healthy young in the same population. Taken together, these results support a link between healthy aging and a healthy gut. The characterized baseline gut microbiota composition in this extremely healthy Chinese cohort could serve as a comparison for future cohorts with chronic or acute disease.