Gut microbiota and the evolution of the species: an interview with Dr. Seth Bordenstein

Image: The tree of life made out of Nasonia microbes. (Robert Brucker/Vanderbilt) Science Magazine has recently published a study carried out by Dr. Robert Brucker and Dr. Seth R. Bordenstein from Vanderbilt University in Nashville (USA) that seems to 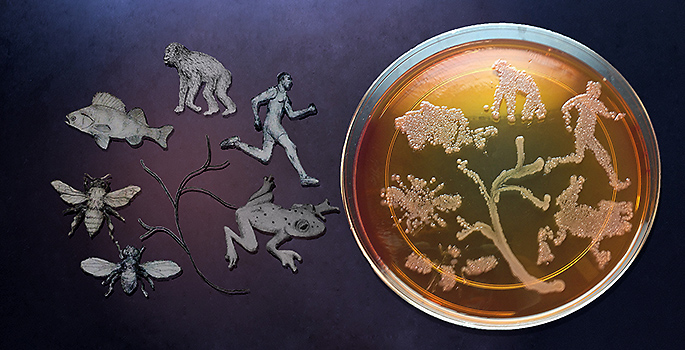 Image: The tree of life made out of Nasonia microbes. (Robert Brucker/Vanderbilt)

Science Magazine has recently published a study carried out by Dr. Robert Brucker and Dr. Seth R. Bordenstein from Vanderbilt University in Nashville (USA) that seems to provide clues reinforcing the “hologenome theory of evolution”. This research suggests that the gut microbiome may have a fundamental influence in the evolution of the human species. We have interviewed Dr. Seth Bordenstein to have a first-hand explanation of this work.

How would you explain your study to the audience of our blog?

Our science begins with the questions of who we are as animal-microbe chimeras and who we are as an animal species. Traditionally, most of us see the living world through a refined set of filters: the animal genome is stably inherited, subject to natural selection, and determines how new species arise from descent with genetic modification. Yet there is a transformation occurring today in our capacity to understand who we are beyond our nuclear genes. Indeed, the science of the microbiome has emerged in the last decade to massively widen the recognition, if not scope, of a species dependency on microbes. In this specific study, Dr. Robert Brucker and I set out to test if the gut microbiome has been overlooked in the process by which new species arise.

Using a model insect system, we first discovered evidence that the DNA from the gut microbiome can retain information on the ancestry of how animal species are related to each other (termed “phylosymbiosis”), just like the DNA in the nucleus’ genome (termed phylogeny). Second, we showed that the gut microbiome is essential to stopping interbreeding between the species. In a series of hybridization experiments with and without a gut microbiome, the work demonstrated evidence that both the DNA from the nucleus and gut microbiome are essential to the speciation process. A mismatch between the right microbiome and nuclear genome is what underscores why hybrids die between species, thus potentially spurring the origin of species.

Why is this work different from previous studies?

This work is different from previous studies because it adds the gut microbiome to a short list of genetic entities that can cause speciation – what Darwin deemed the mystery of mysteries!  In addition to the divergence in DNA sequences in the nucleus and mitochondria, the changes in the gut microbiome can promote the evolution of one species into two.

Do you think this discovery could change the way we understand evolution?

It is possible that preconceptions about how evolution works might cause people to feel that this discovery changes the way they understand evolutionary biology. But owing to exponential advances in science and technology in the last decade, and for those biologists who studied microbes extensively and their interactions with animal hosts, there is no fundamental rewriting of evolutionary biology in this case. Evolution is defined as a change in DNA that occurs over time, leading to new adaptations and speciation. If one looks at the gut microbiome as a major, if not dominant, component of the DNA of a host animal, then changes in the gut microbiome can quite naturally lead to new adaptations and speciation just like changes in nuclear genes. We adhere to this view and suggest that the gut microbiome must be considered a major portion of the genetics of an animal, in combination with the nuclear genome and organelles – what is now called a hologenome.

This is, without a doubt, an interesting piece of research. We thank Dr. Bordenstein for taking the time to explain it to us and we encourage you to check these links to know more about his work.

Digestive and mental health are closely connected and thanks to our gut microbes, scientists may know why

What happens in your gut may affect distal organs that are not apparently connected to your gut. Dr. Premysl Bercik explores what recent studies have shown regarding the association between the microbiome and neurological disorders.