Evidence over the past few years suggests that metabolites produced from microbes in the gut play a crucial role in maintaining gut health.

Evidence over the past few years suggests that metabolites produced from microbes in the gut play a crucial role in maintaining gut health. Tryptophan is an essential amino acid that can be metabolized by certain gut microbes or host cells to produce a variety of derivatives. The products of the microbial metabolism of tryptophan are known ligands of the aryl hydrocarbon receptor (AhR), and activation of this pathway can modulate immune cell populations and barrier function in the gastrointestinal (GI) tract. Alterations in this diet-microbiota-host pathway are thought to contribute to chronic inflammation.

In 2019, Dinallo et al showed lower expression of AhR in the small intestine of patients with celiac disease, an immune-mediated enteropathy that occurs in genetically predisposed individuals who consume gluten in wheat, barley, and rye. The only treatment for celiac disease is strict adherence to a gluten-free diet, which is difficult to follow, has high non-adherence rates and does not always lead to complete mucosal recovery. Altered gut microbiota composition and function has been reported in patients with celiac disease. Those alterations include a decreased proportion of lactobacilli, which have a high tryptophan metabolizing capacity (here; here).

A study led by Dr. Elena Verdu in collaboration with Dr. Harry Sokol, recently published in Science Translational Medicine, set out to investigate the microbial link between celiac disease dysbiosis and the altered AhR pathway in celiac disease.

Using mice that express a celiac disease susceptibility gene, the authors showed that, compared to a low tryptophan diet, a high tryptophan diet shifted gut microbiota composition, leading to a higher abundance of Lactobacillus and Ruminococcus gnavus, which are known AhR ligand producers. That change was accompanied by higher levels of AhR ligands in the feces and increased AhR pathway activation in the small intestine. On the other hand, lower levels of kynurenine, a tryptophan metabolite produced mainly by host cells and implicated in chronic inflammation, was found in mice fed the low tryptophan diet. Importantly, intestinal contents from mice fed the high tryptophan diet had an increased ability to activate AhR, and they were protected from gluten-induced inflammation. Mice fed the high tryptophan diet showed a lower degree of enteropathy and lower number of intraepithelial lymphocyte counts, which are key measurements for diagnosing celiac disease.

Finally, the authors studied a cohort of patients with active celiac disease, patients after 2 years on a gluten-free diet (in remission), and non-celiac controls. Microbial metabolites known to activate AhR were lower in the feces of active celiacs compared to controls. In line with those findings, the microbiota of active celiacs had a reduced capacity to activate AhR and reduced expression of AhR pathway genes such as IL-22, a cytokine that is important in host defense at mucosal surfaces and in tissue repair. Notably, AhR activation by the microbiota and IL-22 expression were rescued in patients treated with the gluten-free diet.

The findings are in line with previous studies in metabolic syndrome and colitis, and suggest that the products of the microbial metabolism of tryptophan could be used as biomarkers for dysbiosis. Importantly, the findings extend the potential therapeutic value of targeting tryptophan catabolites from microbial metabolism to celiac disease. The gluten-free diet is very challenging for patients to follow. “A proportion of patients with celiac disease will not respond to a gluten-free diet, either initially, or will re-experience symptoms. Also, healing of inflammation in the intestine can take years, despite compliance with the diet,” says Verdu. Future clinical studies should examine therapeutic strategies, such as tryptophan supplementation in combination with next generation probiotics that produce AhR ligands from the diet, in celiac patients who do not respond to a gluten-free diet. 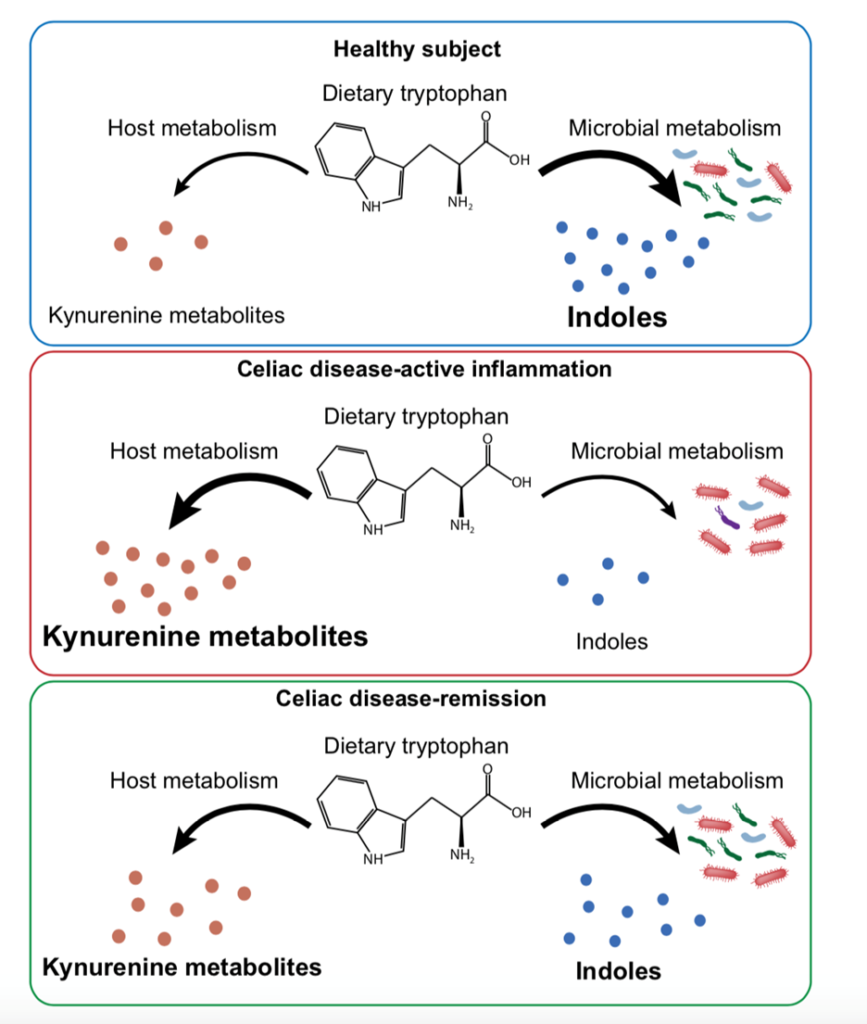 Heather Galipeau is a Research Associate at McMaster University (Canada) where she is researching dietary and microbial interactions in celiac disease and inflammatory bowel disease. She obtained her PhD in 2015 from McMaster University in Elena Verdu’s lab, during which she found that the small intestinal microbial background influences the degree of immuno-pathology triggered by dietary antigens, such as gluten.