How the gut microbiota can relate to preventing and treating gut-related symptoms and what is the role that dietitians can play as gut health ambassadors were some of the key subjects discussed in the scientific session on gut health during the 11th conference of EFAD, which was held in Rotterdam (the Netherlands) on September 29. EFAD is a federation of local dietetic associations from across Europe, which aims to promote the dietetic profession and support scientific and professional development for its 30+ member organizations.

The session, called ‘Dietitians as Change Makers to Manage Gut Health’, which was addressed to dietitians specializing in nutrition and gastrointestinal disorders, featured Christina Katsagoni of the European Specialist Dietetic Network (ESDN) on gastroenterology as chair, and Maria Gustafsson and Prof. Kevin Whelan as speakers.

The official report of this specific session is now available! 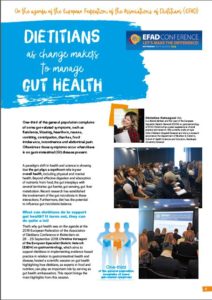 The last 9th Gut Microbiota for Health World Summit hold in Madrid on March updated the science behind diet, the balance between gut microbiota and the immune system, mental health, food intolerances and functional gut disorders, among others. Check out here the Summit’s official report.

The workshop, called ‘Gut microbiota targets in nutrition’, which was addressed to experts and healthcare practitioners specializing in nutrition and gastrointestinal disorders.