Guillaume Sarrabayrouse achieved his PhD in immunology at the Claudius Regaud Institute of Cancer Research in Toulouse, France.

Guillaume Sarrabayrouse achieved his PhD in immunology at the Claudius Regaud Institute of Cancer Research in Toulouse, France. He was a post-doctoral fellow in the INSERM team of Francine Jotereau in Nantes (France), and recently joined the Chaysavanh Manichanh Group in Barcelona.

Sarrabayrouse won the Young Investigator Award for his poster at the 2015 Gut Summit in Barcelona. In his recent research, published in PLoS Biology, he defined a new subset of tumor-reactive T cells, showing that CD4CD8αα T lymphocytes from the lamina propria of the healthy colonic mucosa represent a previously unknown subset of regulatory T cells induced by the gut microbiota (in particular, Faecalibacterium prausnitzii). He also found these cells are present in blood and decreased in inflammatory bowel disease (IBD) patients.

Below, Sarrabayrouse answers some questions about his work for GMFH editors. 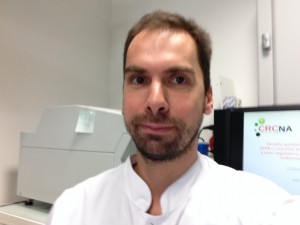 Before the current study, how did you know F. prau was significant in inflammatory bowel disease?

When I joined the group of Professor Francine Jotereau, the aim of our study was to identify tumor-reactive T cells in colon cancers to develop immunotherapeutic strategies. In doing this, we observed two distinct subsets of double positive lymphocytes that we characterized in the tumors and healthy mucosa, and later in blood. The potent regulatory properties of the CD4CD8αα subset led us to ask if it could be induced by human Clostridium bacteria, as shown in mice for the colonic Foxp3 Treg. That F. prausnitzii was a good candidate became rapidly obvious from the important literature underlying its role in IBD. Fortunately, we could test this hypothesis rapidly using F. prausnitzii and a few other bacteria provided by the French INRA group that has been pioneering in demonstrating the anti-inflammatory properties of F. prausnitzii.

Can you briefly describe your study methods?

We characterized the frequency and phenotype of CD4CD8αα lymphocytes (DP8α) present in the healthy colonic lamina propria (from cancer patients), and in the blood of healthy donors by flow cytometry. Regulatory functions of DP8α populations were demonstrated using pure cell lines of these cells and, as negative controls, of their CD4 homologues, obtained by flow cytometry sorting. We analyzed the specificity of these cells (both cell lines and ex-vivo cells) against monocytes loaded with bacteria from the gut microbiota. We also compared the frequency of DP8α and of F. prausnitzii-specific DP8α cells in the colonic mucosa and blood from healthy donors and IBD patients.

Did anything surprise you about your results?

A surprising point of our results was that DP8α Tregs were specific for F. prausnitzii (strongly suggesting that this bacteria contributed to their induction), but lacked Foxp3 expression unlike the Tregs of the mouse colon induced by bacteria of the same Clostridium group. This raises the question of whether these two subsets are functional analogs. In support of this, Tr1-like DP8α Tregs are lacking in the mouse colonic lamina propria, as supported by the observation that most IL-10-secreting T cells in this compartment express Foxp3.

Do you think Faecalibacterium prausnitzii are the only bacteria that induce cells that prevent or control colonic inflammation?

Our results showed that a high proportion of colonic DP8α Tregs recognize F. prausnitzii antigens. This supports a role of this bacterium in their induction, together with the many data demonstrating the immunoregulatory properties of F. prausnitzii. However, we cannot exclude that other bacteria can induce part of these Tregs or other cell populations with regulatory properties, notably the short chain fatty acid-producing bacteria.

What differences did you find in Tregs between mice and humans, and what are the implications?

Our data, together with the reported lack of Foxp3-negative IL-10-secreting T cells in the mouse colonic mucosa, highlight a difference between mice and humans regarding the subset of Tregs that are induced by Clostridium bacteria. Such a difference is a drawback to assess the roles of DP8α Tregs and conditions of their induction, as conventional mouse models of inflammatory diseases cannot be used for these purposes.

How might this research result in clinical applications for IBD?

Importantly, if DP8α levels in the blood or colonic mucosa predict disease evolution (currently being assessed in collaboration with Gastroenterologists at the Saint Antoine Hospital in Paris) it would confirm their contribution to the prevention of IBD. This would open the road to new therapeutic strategies for IBD, relying either on manipulating the frequency of F. prausnitzii in the gut microbiota or increasing the number of circulating DP8α Tregs through specific in vivo stimulation or induction, or adoptive transfers of these cells.