Dr. Paul Moayyedi, a gastroenterologist and researcher at McMaster University in Hamilton, Canada, was the first author of a study published earlier this year that investigated fecal microbiota transplantation (FMT) as a way to induce remission in patients with ulcerative colitis (UC). (See the study summary here.)

Dr. Paul Moayyedi, a gastroenterologist and researcher at McMaster University in Hamilton, Canada, was the first author of a study published earlier this year that investigated fecal microbiota transplantation (FMT) as a way to induce remission in patients with ulcerative colitis (UC). (See the study summary here.)

Although patient recruitment was discontinued at the study’s halfway point for reasons of futility, Moayyedi says he was encouraged by the final results and says that FMT could have the potential to treat ulcerative colitis as well as, or better than, currently available therapies. Below is what he had to say in a recent interview with GMFH editors. 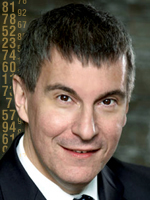 What made you decide to investigate FMT for UC?

The focus of [treatments] for ulcerative colitis has been to suppress the immune system in a variety of ingenious ways… they don’t cure the disease and they don’t always work. It seemed to us that what we [should do is] focus on what’s driving the immune system in the first place. And in the [current models] of colitis, in fact, the only real thing that could be driving that is the microbiome.

It made sense to us to try fecal transplants, as you have a large number of microbes — they come from a healthy person, so presumably most of them are not harmful and hopefully a lot of them are beneficial. Probably some of these are bacteria the patient has lost related to their disease, and [the aim is to] try and shift the environment from one [associated with] ulcerative colitis to a more healthy environment.

What did you expect going into the study? How did things change as the study progressed?

The ethics committee approved the study, but trials — particularly ones with a new therapy — should have a data monitoring committee that is separate from the people running the study.

At the halfway point we had designated that we would review the data, and [the Data Monitoring and Safety Committee had to decide] whether the trial continues or not [based on the protocol we created].

We [had] a rule to stop for futility, because if we’re doing something that’s experimental what we didn’t want to do was subject people to treatment that we know [does not help] the disease.

Our resources were limited to study this and we didn’t want to do a large trial that was clinically [ineffective] at the halfway point.

At the halfway point there were four responders in the treatment group and three in the placebo group. If we doubled those numbers we weren’t going to reach statistical significance at the end. So they decided to stop. It was a controversial decision, and it just emphasizes that this is a therapy we’ve yet to understand how it works, or indeed if it works.

[After that, we] switched specifically to donor B because… actually most of our successes were with donor B.

In your study, 24% of the FMT group ultimately responded to the treatment. What do you want to know next about the responders?

We are looking at the microbiome of donors, particularly donor B. We’re looking at the profile of those that had successful therapy versus those that had unsuccessful therapy. At this point we don’t have a ‘smoking gun’ as to what’s driving this disease, and we probably will need more information before we can identify that, but we are planning to do another study and this one will single out donor B and use that donor exclusively. We’ll also randomize people to antibiotics before giving the therapy versus not giving antibiotics. The antibiotics we use will be partly decided by the profiles we’re seeing of the patients before, and those that respond and those that don’t, so we get —  in theory — people looking more like the people who responded in this study.

We need more patients, we need more studies to know whether this works or not, and what is the optimal approach.

The other thing was, this protocol had stated that we would use fresh or frozen [samples] but try to use fresh because we thought that was more likely to be successful. [Co-author] Christine Lee has done a large randomized trial of fecal transplant in [Clostridium difficile] and used fresh versus frozen, and found no difference. Once she had the results of that she started using more frozen.

Because she was trying to use donor B exclusively, she used a lot more frozen [sample]; that didn’t seem to make any difference to success rate. If anything, it was higher in the frozen group. If [in the future] we go with donor B we will use predominantly frozen sample, which seems to work, which in turn suggests that maybe anaerobes aren’t important in this setting and it may be the aerobic bacteria that are having the effect — if indeed there’s an effect at all.

It’s well known that thousands of patients are doing FMT at home. What do you think is the way to address this?

First of all, I would not recommend it. This is a potentially dangerous therapy in anyone’s hands, and anyone that takes part in our study, I do warn them that whilst the donor they get is healthy, you can never be 100% sure you’re not transmitting harmful organisms. We obviously test for any organism that could be harmful and any donor that had those [would] go out of the program in terms of being able to donate. But of course there are millions of bacteria, literally, out there that we don’t know about yet, and some of them could be harmful.

If you’re doing it yourself, that potential is magnified enormously because you’re not testing for things like hepatitis C, HIV, etc… There may be harmful organisms that you are unaware of, that you are then giving yourself. The last thing we would want is a backlash of people getting ill when they’re trying it, because it’s been done in such an uncontrolled way.

If you’re doing it at home, if you do notice a benefit and no one can work out why after the fact, then you’re not helping science make this a more [accepted] therapy. The only way to do that is to study it.

I would urge people if at all possible to take part in a study. You can not only help yourself, in some cases (not all in our trial), you also help understand how to do this better in the future.

Our trial was in Hamilton, Ontario, but we treated people as far away as Vancouver… we certainly treated quite a few people from places like Ottawa, Montreal, London: cities quite distant from Hamilton. We were prepared to work with people to try and get them the therapy that they’re interested in, but done in a scientific way.

What do you see as the long-term potential of FMT to treat UC?

In people who have just got diagnosed with ulcerative colitis, the microbiome that is driving it is probably not entrenched yet and [is] probably more easy to displace. It is quite possible that [FMT] could be the first approach, once we understand it better.

The other thing that interests me is you could identify a group of bacteria that are really driving the response, and then you could create probiotics that you give directly that help people with ulcerative colitis. But unlike probiotics now, which are mainly lactobacilli and bifidobacteria… [moving] to a much more hypothesis-generated bacteria that you [select] through how you’ve seen it work when it was given in feces.

It’s an exciting time for this therapy in ulcerative colitis and it could take all sorts of directions. [But] all those directions, if it works at all, are leading toward finding a cure for this disease rather than putting a band-aid on the problem, which is essentially what we’re doing by suppressing the immune system.

[Research] promises to be able to identify what the causes are, or cause is, but I still think there’s quite a road to go before we get there. Because of the amount of bacteria in there, it’s going to be hard to find the culprit.