Patrick Veiga and MetaHIT colleagues tested how fermented milks product could modulate microbiota. Using a metagenomics approach, they found that the abundance of unknown species increased in the gut when patients took the fermented milk product. Having access to the

Patrick Veiga and MetaHIT colleagues tested how fermented milks product could modulate microbiota. Using a metagenomics approach, they found that the abundance of unknown species increased in the gut when patients took the fermented milk product. Having access to the functional content, authors found that those species had the functional potential to produce butyrate. Patrick Veiga accepted to give us more insight about this study.

1) What is your background ?
I have a PhD in molecular microbiology. Danone Nutricia Research hired me in 2008 to explore the interactions between probiotics and the gut microbiota. This was a great challenge for me and Danone that required [joining] forces with academic partners. So, we did. 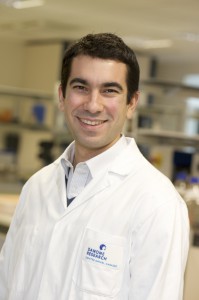 2) What is the context of your work ?
During the last decade, we witnessed a fast emergence of gut microbiology science due to the development of new technologies allowing deep and cheap sequencing of the gut microbiome. The MetaHIT consortium, led by Dr. Dusko Ehrlich from INRA, was a key player in the field by generating revolutionnary bio-informatic tools and concepts (i.e. the first gene catalog of the human gut microbiome, enterotypes and metagenomic species) published in high profile journals.
By extending our knowledge on the gut microbiota, the scientific community started to realize that this “forgotten organ” could be involved in several western country-related diseases (i.e. obesity, diabetes, inflammatory bowel diseases and irritable bowel syndrome…).

3) What was the most challenging part of your work ?
For a long time, we hypothesized that certain live bacteria (i.e. probiotics) contained in fermented milks products could also be active in the colon and interact with our resident bacteria. This hypothesis was tested many times but many groups had failed in seeing an impact of probiotics on the resident gut microbiota. This can simply be explained by the lack of high phylogenetic resolution with the current tools available. The tools developed by MetaHIT reached an unprecedented resolution, allowing detect[ion of] changes of single species in the gut microbiota. The revolution came also from the fact that this novel bioinformatic algorithm could quantify not only known bacteria but also unknown species! More than that, this tool could also inform you on the functions carried by these unknown species!

4) What were the main findings and the main limitations ?
We were successful in detecting a modulation of the human gut microbiota upon consumption of a fermented milk product containing 5 different bacterial strains including Bifidobacterium lactis in subjects with irritable bowel syndrome (IBS). Half of the species modulated by the product were unknown and would have been not detected without the use of the MetaHIT species detection pipeline. Here, we observed that some of the unknown species stimulated by the fermented milk product could produce butyrate, a beneficial molecule known to play a key role in the intestinal physiology. Interestingly, butyrate has been reported to be low in IBS, suggesting that its increase might be beneficial for this population. We also observed a diminution of a potential pathogen called Bilophila wadsworthia, known to be favored by a western diet and induce intestinal inflammation.

Before this study, we did not have a clue how probiotic[s] could modulate the gut microbiota in human[s]. Today we know that probiotics do interact with the resident microbiota and we even have a hypotheses on the reasons behind [it], although they need to be validated by future studies. Since the technology is evolving so fast, it is to be expected that we will discover new species modulated by probiotics in the future. I am also convinced that the development of these technologies we will help in understanding better the functioning of the intestinal ecosystem.

5) How your study could help clinicians in the future ?
In a not so far future, clinicians will be able to map the gut microbiota of patients in a very easy fashion and perhaps detect deficiencies. By knowing which activities probiotics can deliver, they will be able to recommend some of them to restore loss functions and favor resident beneficial microbes such as the butyrate producers.