Previous research has shown that human gut microbial communities may be grouped into three types-called enterotypes-driven by high abundances of Bacteroides (enterotype 1), Prevotella (enterotype 2) and Ruminococcus (enterotype 3). Although gut microbiota may mediate the relationship between dietary habits 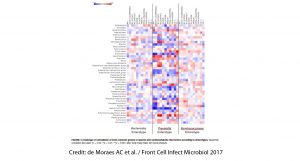 Previous research has shown that human gut microbial communities may be grouped into three types-called enterotypes-driven by high abundances of Bacteroides (enterotype 1), Prevotella (enterotype 2) and Ruminococcus (enterotype 3). Although gut microbiota may mediate the relationship between dietary habits and cardiovascular diseases, the role of enterotypes in understanding mechanisms linking dietary habits to cardiometabolic diseases has not been explored yet.

A recent cross-sectional study, led by Dr. Sandra R. G. Ferreira from the Department of Epidemiology at the School of Public Health in University of São Paulo (Brazil), has found that enterotypes may help understand the impact of daily diet exposure on cardiometabolic risk factors among Brazilians.

A sample of 268 Brazilian adults (mean age 49.4 years, 54.2% women) was included in the study. They reported their dietary habits and had clinical and biological samples collected. 111 participants were assigned to the Bacteroides enterotype, 55 to Prevotella, and 102 to Ruminococcaceae. As the three enterotypes were present in Brazilians, these results show that the bacterial groupings are not population-specific and are present in populations living below the equator in a similar structure as previously described for populations from the Northern hemisphere. The Prevotella group contained the highest amount of strict vegetarian individuals –Prevotella has been previously associated with a plant-rich diet– and individuals with this enterotype showed diet-independent lower low-density lipoprotein-cholesterol (LDL-c) levels than those with the Bacteroides enterotype.

To sum up, dietary habits (i.e. vegetarianism) may be important determinants of commensal bacteria enterotypes or groups. Besides this, the presence of protective bacterial groups in those with the Prevotella enterotype may mediate the association between a vegetarian diet and a better cardiometabolic profile. Further prospective studies are needed to elucidate the role of enterotypes in the relationship between dietary habits and cardiometabolic risk factors.