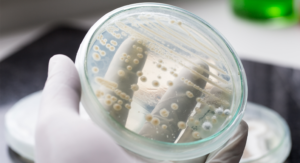 Over the past 15 years, scientists have focused mainly on the bacterial fraction of the gut microbiome to characterize its composition and impact on human health and diseases. Despite this, fungi, phages, archaea and protists also count as native constituents of the microbiome, and now, scientists have also started to take an interest in their physiological relevance.

A recent review discusses what it is known about the make-up of fungal communities on the body and their role in host health and gastrointestinal diseases. GMFH editors corresponded with authors Harry Sokol and Mathias L. Richard via email to clarify the relevance of the gut microbiota’s fungal component and how its study might impact on clinical practice in the foreseeable future.

Bacteria represent huge quantities of microorganisms that inhabit the lower gastrointestinal tract, whereas fungi represent a tiny part. What are the mycobiota’s functions?

To date, there is no reason to say that the mycobiota is less important than the bacterial microbiota even though it is present in a minority. Indeed, cell count levels cannot be considered as the only way to compare these two communities. For example, cell size has to be taken into account and fungi cells are 100 times larger in volume than many bacteria, thus representing a much larger biomass with potent production capacities. As such, like bacteria, fungi can (i) secrete a large set of molecules that can affect the host even in low concentration, and; (ii) metabolize molecules from the environment into active molecules. Fungi also bear antigens (cell wall beta-glucan or mannans, for instance) that participate in the crosstalk with the host immune system, both locally and remotely. We also showed in a recent study that bacterial and fungal communities can influence each other, suggesting that the mycobiota, in addition to its direct effect on the host, might also indirectly affect the host through impact on the bacterial microbiota.

What are the approaches for characterizing the fungal community in biological samples and what are the main challenges associated with mycobiota analysis?

The approaches are similar to the one used for bacteria. It is possible to use culture methods or metabarcoding sequencing approaches targeting markers such as 16S but adapted to the fungal genome which are, in most studies, the ITS1 and 2 barcodes (for internal transcribed spacer) localized between the fungal ribosomal subunits. To date, the metagenomics approach using shotgun sequencing is not completely ready to be used on the fungal community. First, the databases are still poor and small when compared with the diversity of the fungal community, which means they require considerable and profound improvement. Secondly, fungal DNA is present in much lower concentration than bacterial one, thus leading to the need to perform very deep sequencing to detect a significant signal. Managing to get most of this small fungal DNA fraction “diluted” in the bacterial and host DNA is another big challenge for the future.

There are at least three factors working in concert that influence the mycobiota composition: (i) diet, because it contains fungi (cheese, vegetable contamination, etc.) and it also determines the availability of nutrients for intestinal fungi; (ii) the host obviously interacts with the microbiota in many ways, at the mucosal surface with mucus or with the different molecules produced and secreted in the gut lumen (anti-microbial peptides, bile acids, etc.), and; (iii) importantly, the gut microbiota’s other inhabitants are also factors that influence mycobiota composition. Bacterial interactions directly through active molecules or indirectly through the host are very likely major determinants of the fungal community. Additionally, other eukaryotes or viruses may be of importance, although they have been subject to very little study to date.

The fungal microbiota may be skewed in some diseases and that, in turn, may be driven by disease-specific alterations in intestinal microbiota diversity and impaired mucosal immunity to fungi. In what diseases has the mycobiota played a role and what are the possible consequences of intestinal fungal dysbiosis?

Historically, the mycobiota has been involved in the IBD pathogenesis, most notably associated with Anti-Sacharmocyces cerevisiae antibodies (ASCA) and Crohn’s disease. Some fungi strains have also been shown to exhibit a pro- or anti-inflammatory effect (Candida albicans or Saccharomyces boulardii, respectively) in vitro and in colitis models in mice. However, to date, there is no clinical implication for managing patients with IBD. Mycobiota might be involved in other diseases such as metabolic syndrome and cancer, but we are still at the correlation step.

The involvement of fungal microbiota in IBD pathogenesis is one of the most widely explored fields. Evidence is accumulating that IBD is influenced not only by commensal bacteria but also by commensal fungi. What have we learned about fungal microbiota dysbiosis in patients with IBD when compared to healthy subjects?

The main message is that, in patients with IBD compared to healthy subjects, the mycobiota is strongly modified in the luminal compartment or in the mucosa. For instance, in a large cohort of 235 patients, we showed that the stool mycobiota of patients with IBD showed a drop in Ascomycota that was balanced by a rise in Basidiomycota. Although this needs to be looked at more generally through additional studies, two independent studies seem to suggest that there is a fall in Saccharomycetes and a rise in Candida and Malassezia species in IBD settings. More in-depth research needs to be done into this matter in order to decipher the role of each genus in the microbiota and the inflammatory process.

Beyond the mycobiota inhabiting the lower gastrointestinal tract, is it relevant to study fungal communities located in other areas of the body such as the oral cavity, skin surface, the vagina and the lung?

It is indeed! Due to its anatomic localization, the oral cavity has a link with the gastrointestinal tract and, thus, will influence the colonization of the gut with its mouth-colonizing microorganisms. As such, it is crucial we follow the gut-mouth link and mouth mycobiota composition. It has been shown that the mouth mycobiota is the human body’s most diverse mycobiota, so its influence on the gut microbiota is certainly strong. We also know that the mouth mycobiota is already an actor in disease, notably through oral candidiasis affecting immunocompromised or antibiotics-treated patients. Skin surface and vagina are two locations where the mycobiota is present in a relatively higher proportion when compared with gut bacteria. In the skin, for instance, the mycobiota can reach 10% of the total microbiota. Consequently, the influence of the mycobiota on the host is certainly important. Moreover, in these two niches, fungi can be involved in infections. A better understanding of the local ecosystem and the mechanisms underlying the intermicrobial interactions might help develop new therapeutic strategies.

What comes next in gut mycobiota research and how can we benefit from targeting specific commensal fungi in the clinical setting in the near future?

Currently, our main interest lies in the considerable influence bacteria and fungi can have on each other in the macro-environment. These two kingdoms have lived together for thousands of years in different locations, so they must have evolved together and kept up a strong interaction. By understanding these interplays, we are convinced that we can pinpoint specific targets in order to influence microbiota and host in dysbiotic situations.