The gut microbiota modifies behavior in mice through affecting metabolism 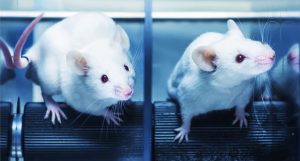 Obesity may develop from a combination of different factors – some environmental factors, genetic predisposition and according to recent research microbiome may also play certain role in it. Obesity often co-occurs with mental health disorders, including a higher risk of developing depression and anxiety which is also true for other chronic illnesses. But although we know that neurological symptoms may be directly or indirectly regulated via microbiota-gut-brain axis, how the microorganisms inhabiting the intestinal tract contribute to them is still under research. According to the World Health Organization report there are currently more than 422 million people who have diabetes now across our planet. Considering the numbers of people suffering from this condition is on the rise it is important to study poorly understood connection between brain, insulin resistance and microbiota.

Prof. C. Ronald Kahn and his lab members have recently demonstrated that gut microbiota can change the behavior in mice through sending signals to the brain that are responsible for insulin regulation. To demonstrate this type link between gut-brain-microbiome axis scientists evaluated the behavior and insulin activity in mice with diet-induced obesity and with or without antibiotic treatments.

Antibiotics changed the composition of gut microbiota of obese mice. These mice became obese because of the high-fat diet (HFD) they received during the 6-week study. During the last two weeks of the study antibiotic treatment lowered high glucose blood levels as well as insulin levels in obese mice. After antibiotic treatment was over, glucose and insulin levels reverted back to higher amounts. These results suggest that antibiotics can be the mean to reduce glycaemia and insulin levels through changes in intestinal microbiota.

Additionally, the same mice fed with the HFD were more anxious and stressed than their counterparts fed on a regular low-fat diet. Well, this is actually not that surprising because there is scientific evidence which shows the association of obesity and some mental illnesses. This anxious and stressed behavior was gone in mice after antibiotic treatment and came back after antibiotic treatment was stopped.

Researchers from Prof. Khan’s lab found a strong link between the brain and microbiome, or so called second genome. They demonstrated that antibiotic treatments in HFD fed mice reduced inflammation in brain regions that also control mood and behavior via changes in gut microbiota.

Even though this specific study has been done in mice it is a great reminder that the food we are eating is not only affecting blood sugar and metabolic pathways in our body but it also changes the composition of our microbiome and the metabolites they are producing. Some of these microorganisms can produce particular metabolites, known as neurotransmitters. And the presence or absence of these neurotransmitters may indirectly affect our brain and subsequently changes our mood, anxiety and behavior.

We need more research of this kind not only in animals but in humans too to better understand the relationship between microbiota and the brain. It is yet to be discovered which particular microbes and what metabolites they secrete to mediate metabolic responses in the brain, and how this communication takes place. However, this is a great step forward in discovering potentially novel treatments of some neurological disorders associated with T2D.