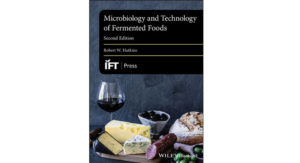 Fermented foods have been produced and consumed since the beginning of human civilization and are now, once again, becoming more prevalent in our diets and in a variety of forms. Prof. Robert Hutkins from the University of Nebraska (USA) studies the role of beneficial microbes in manufacturing fermented foods and in human health. In January 2019, he published the second edition of Microbiology and Technology of Fermented Foods.

Prof. Hutkins corresponded with GMFH editors on the relevance of including fermented foods as part of a healthy diet and lifestyle.

The lay press, magazines and blogs worldwide have increased their coverage of the health benefits of fermented foods, but it is sometimes hard to know to what extent media coverage correlates with findings in scientific journals. What prompted you to publish a book about the science behind fermented foods?

When I wrote the first edition in 2006, I had two primary motivations. First, I was teaching a course on microbiology of fermented foods, and I simply wanted a textbook for my students.  At the time, the only other book was Brian Wood’s two-volume 1998 text that was an awesome resource but not really useful as a textbook.

Then, not long after the first edition was published, there was an explosion in interest in fermented foods and beverages. For sure, plenty of microbiologists were attracted to the field because fermented foods represented a terrific model for studying microbial physiology and ecology. Plus, lots of cool genomic tools had been developed that could be used to identify microbial communities and define their role in fermentation. Thus, the second edition is in response to all this new-found attention.

Fermentation is back and living microorganisms are becoming more and more popular in our lives. How can fermentation nowadays be the impetus for helping us think differently about our relationship with food and with the multitude of life forms that live around and inside us?

Several factors have contributed to the considerable public interest in fermented foods. We have to acknowledge the Jamie Lee Curtis-Activia advertising campaign from a decade ago. All of a sudden, people were having polite conversations about digestive health and other topics long considered unpleasant. Around the same time, thanks in part to the human microbiome project, people began to appreciate that we are more microbe than human with respect to the number of genes.

But the main factor that changed consumer attitudes about microbes was probably due to consumer interest in craft beers, boutique wines, sourdough breads, artisan cheeses, kimchi, and kombucha. This awareness also coincided with interest in healthy eating. It was the perfect storm. That you can even make many of these foods at home added to the cool factor.

What are fermented foods and how can they be classified, taking into account their source of active microbes?

I define fermented foods and beverages rather broadly as raw materials converted to final products via the action of microbes. The most common fermentations result in formation of acids, alcohol, and carbon dioxide. Obviously, milk into yogurt, grapes into wine, and flour into bread fit this definition nicely. You can certainly tell by their acidic taste or alcoholic character that these products are fermented. But tempeh and natto are also fermented, and they have their own unique non-acidic and non-alcoholic flavors and texture properties.

Fermented foods can also be distinguished based on how the microbes are introduced. For thousands of years, fermented foods were started spontaneously, i.e., by the microbes that naturally inhabited the raw material. Many wines, some types of beers, a few traditional sausages, and sauerkraut and kimchi, are still made this way. Eventually, the back-slopping technique—using a fermented portion as the culture—was adopted. The sourdough sponge is a perfect example of this practice. Finally, a century ago, pure starter cultures were introduced, and these are now widely used, especially for dairy, meat, beer, and bread fermentations. Still, many fermented foods continue to rely on traditional processes.  Indeed, in Europe, many fermented foods are made in accordance with so-called Protected Designation of Origin requirements, which dictates the type or nature of the culture.

Which is the value and nutritional interest of fermented foods when compared to the raw materials from which they are made?

No doubt, milk, meat, cereal grains, legumes, and fruits and vegetables are major sources of protein, vitamins, minerals and other valuable nutrients. The very act of fermentation can enhance the nutritional value of these foods in several ways. Vitamins can be produced, polyphenolic compounds with anti-oxidant activity can be enriched, and biologically-active peptides that have anti-hypertensive properties can be formed.

It’s the live microbes found in fermented foods and their potential for improving gut and immune health that have attracted the most interest. If you eat yogurt or kimchi, for example, you could be adding billions of microbes to your gut. True, they are mainly visitors, but if consumed regularly, they may be able to influence gut heath by out-competing undesirable microbes, producing vitamins and other end-products, and modulating the immune system. Perhaps the best example is for yogurt, where the culture bacteria digest lactose, or milk sugar. This is why many lactose intolerant individuals can safely consume yogurt.

Are fermented foods suitable for everyone?

In general, of course! Humans of all ages and cultures have been consuming fermented foods and beverages for thousands of years. Indeed, these foods are staples in much of the world. Exceptions might be for fresh cheeses made from raw milk, which pregnant women should avoid. Some individuals are sensitive to a class of compounds called biogenic amines that are found in wine, beer, and aged cheese. Of course, alcoholic beverages should be consumed, as they say, in moderation. And individuals that have known food allergies should avoid those particular foods, whether or not they are fermented.

There is plenty of epidemiological data showing that consumption of fermented food is associated with improved health and reduced risk of disease. Examples include improved weight management, reduced risk of metabolic syndrome, heart disease and atopic dermatitis. Clinical studies have focused on yogurt and cultured dairy foods, with many of these studies showing improvement in bone health, blood pressure, and reduced risks of cancer and heart disease. As noted above, enough clinical evidence exists for yogurt and lactose tolerance that the European Food Safety Authority (EFSA) has even approved a health claim.

As noted above, plenty of large, well-designed epidemiological studies exist to support the health benefits of fermented foods. Consumption of yogurt and cultured dairy products, in particular, is associated with improved weight status and reduced risks of metabolic syndrome and coronary heart disease. Likewise, regular consumption of kimchi and other Asian-fermented foods was associated with reduced risk of atopic dermatitis.

Demonstrating health benefits in clinical, randomized controlled trials still remains a major challenge. This is because of the limited funding opportunities for researchers, as well as experimental issues. It’s hard, for example, to double-blind subjects when the treatment is fresh kimchi or kefir. Many foods also contribute vitamins, fiber, high quality protein, and other nutrients even in the absence of fermentation.  Nonetheless, given the increasing incidence of so-called western diseases, researchers, as well as funding agencies and the food industry, have plenty of incentive to organize and fund studies assessing the health properties of fermented foods.