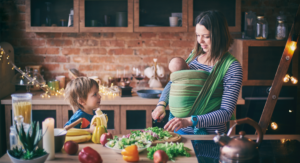 With so many diets and  trends– high fat, low fat, low carb, Paleo, vegan, etc.– it’s hard to know which diet is best for our health. Diet greatly influences gut microbiota composition, and evidence shows how the gut microbiota metabolizes our food may matter as much as what we eat.

The way our gut microbiota metabolizes fats, carbohydrates and proteins affects our overall health such as our immune system and even genetic expression. A lot of research has already uncovered how certain bacteria in our intestines ferment non-digestible fibers and produce short chain fatty acids (SCFA), which have numerous health benefits. However, less is known about the effects bacteria metabolizing dietary protein have on our health. The gut microbiota ferment ingested proteins from our diet to produce small molecules called metabolites such as branched chain amino acids that can affect our metabolism. Branched chain amino acids have been linked to various metabolic conditions like type 2 diabetes and obesity, which are major public health concerns. A review published in Microorganisms summarizes recent studies that analyze the effect of the metabolites produced by the gut microbiota fermenting protein.

So how do the gut microbiota metabolize protein? When we ingest food, enzymes present in the mouth, stomach, and small intestine break down proteins into smaller components called amino acids. Some intestinal bacteria use amino acids that we don’t absorb as an energy source. Then in the large intestine, some bacteria ferment amino acids producing various compounds called metabolites. These metabolites are responsible for affecting our metabolism, immune system and nervous system.

Researchers have recently discovered that a high protein and low fiber diet, like the Western diet, affects which protein metabolites bacteria produce. High protein consumption will promote the production of harmful metabolites, whereas high fiber consumption can protect against inflammation and reduce the amount of harmful metabolites created by bacteria. It’s important to note that not all bacterial protein fermentation produces detrimental effects. For example, indole, which comes from the protein tryptophan and is an essential amino acid, benefits the nervous system by improving neural development and protecting against the autoimmune disease multiple sclerosis.

In the meantime, the authors conclude that regardless of your protein consumption, it seems that consuming adequate fiber provides the most overall health benefits because it also contributes to the health of your microbiota.

*According to the World Health Organization (WHO), obesity has tripled worldwide since 1975 and type 2 diabetes has more than quadrupled since 1980